Spencer: The “Cold Days” storyline in Batman 51-53 has almost been sort of a mystery story, but the mystery isn’t “did Mr. Freeze commit murder,” it’s “why is Batman defending him?” Retcon Punch’s own Drew and I had a small debate about it in the comments of our discussion of issue 52; I believed that Batman, in his grief over Selina leaving him at the altar, had falsely incriminated Freeze, and was now looking to find justice for him, while Drew countered that Bruce buying his way onto a jury and pitching his own defense of Freeze isn’t justice at all. It turns out that, in a way, we were both right; Bruce is indeed driven by his grief over Selina and the mistakes it’s led him to make, but he isn’t seeking justice, he’s seeking absolution.

Much of Batman 53 is devoted to a monologue Bruce delivers to his fellow jurors, detailing how he lost his faith in God after his parents’ death, and how he eventually came to find salvation instead in Batman. This isn’t the first time Tom King’s Batman run has played with comparisons between Batman and God, but this is the most explicit it’s gotten, with Bruce flat-out saying he thought Batman was a god, in a panel focusing on a cross necklace.

Thus, Bruce loses his faith a second time when “Batman” can’t save him from the pain of losing his true love. 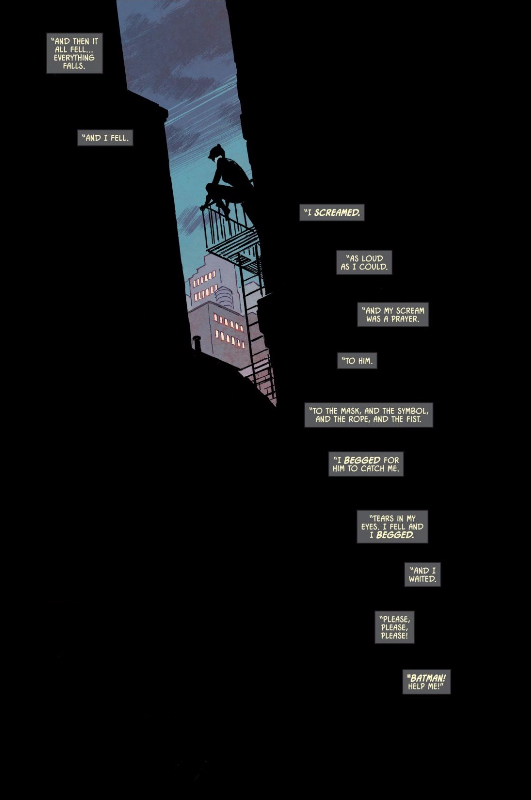 King, artist Lee Weeks, colorist Elizabeth Breitweizer, and letterer Clayton Cowles work together in concert beautifully here, using the downward path of Bruce’s narration boxes to trace his fall into darkness, with the object of his affection only visible in the distance, moving away from him, leaving him all alone in the pit of pure black that dominates the page.

This crisis of faith leaves Bruce’s confidence in himself shattered. His argument to the rest of the jury is that Batman is fallible, and that after everything he’s done for the city, and for each and every individual in that room, it’s their responsibility to save Batman from the guilt and shame of being responsible for an innocent man’s condemnation. The jury agrees, and Freeze is found Not Guilty. Justice is served — or is it?

Interestingly, Mr. Freeze is barely a footnote in this issue, despite it depicting his trial. Although Bruce at one point casually refers to Freeze as an innocent man, his entire argument revolves around pardoning Batman, not Freeze. And then there’s Alfred, always the voice of reason, who points out that there were much easier, more legal methods to get Freeze off if a verdict was all Bruce was truly interested in.

This ultimately shows that Freeze is just the catalyst that helps Bruce realize that he needs help. He didn’t bribe his way onto that jury to find justice for Freeze; he did it to find understanding, forgiveness, and absolution for himself.

In fact, Bruce treats the jury like his own personal therapy session, giving them his life story and giving way to tears on multiple occasions. He can’t be fully honest, though, due to his secret identity, and it’s that secret identity that hides a crucial aspect of Bruce’s monologue — the “god” he lost faith in, that he spends so much time tearing down in this issue, isn’t some distant, mysterious figure. It’s a part of himself.

Jesus, I don’t have nearly enough room to dig into the ramifications of Bruce previously having practically religious devotion to his own ability to always save himself and others. It certainly doesn’t paint the most flattering picture of his own psyche. It’s just as worrying, though, that Bruce is so shattered, so rocked, so shaken by his own inability to catch, save, and comfort himself in a difficult situation. 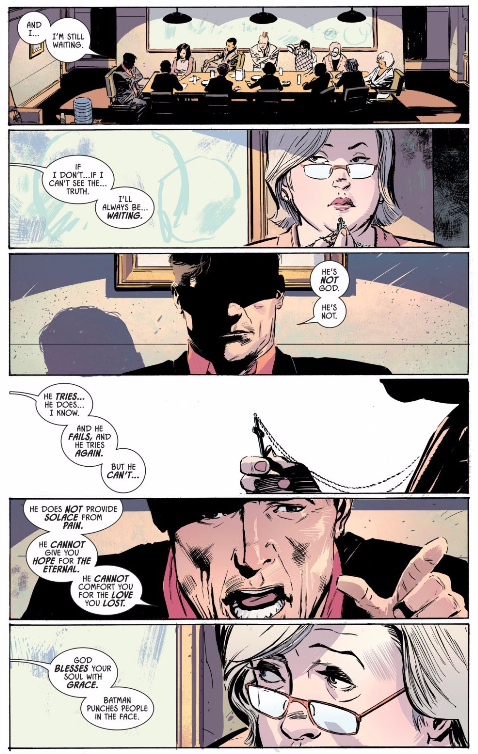 As much as Bruce claims to have some compassion for Batman here, that he knows he tries, he mostly just seems consumed with righteous indignation that Batman — that he himself — isn’t god. That’s not healthy, Bruce — and that’s likely the point. Bruce’s behavior feels self destructive in the same way that Selina’s does over in Catwoman right now; if she’s self-medicating by having physical pain inflicted upon her, than Bruce is self-medicating by inflicting emotional pain upon himself.

I’m certainly sympathetic to Bruce, and his mission these last few issues resulted in something good, but it’s also clear that he’s coming from a selfish — or at least a self-centered — place. Batman isn’t seeing clearly; unusually for him, he’s missing the bigger picture. This legal victory sets a troubling precedent; if “Batman being fallible” is enough to create reasonable doubt in this case, what’s to stop any other supervillain from using the same argument and getting away with murder? In fact, given that Bane has been manipulating almost all the events of this series from behind the scenes, maybe this outcome was his goal all along, and Bruce played right into his hands. It seems unlikely, but not impossible; he’s certainly invited trouble, if nothing else, and I don’t think Batman is quite up to dealing with that any possible consequences just yet.

Patrick, this is such a dense issue that we could both probably talk about it all day and not run out of things to say. What’s your take on this one? You specifically mentioned to me that you were interested in talking about King and Weeks’ use of religious imagery, so I look forward to that. Did you have any additional thoughts about the Job quote that ends the issue, or the imagery/symbolism of Bruce switching up his costume, especially when, again, Selina has recently done the same thing for just as complex reasons?

Patrick: The religious imagery is exactly why I wanted to discuss this issue with you, Spencer. I’ve always liked the idea that there’s a subtle distinction between Bruce Wayne and Batman – the later being just abstract enough to really mean something to everyone. That’s the godliness that we see Bruce challenging throughout the course of this issue. We’re witnessing man in the suit coming to terms his relationship to that abstraction.

It’s an impossible thing to wrestle with in the real world. A belief in God poses an almost human-invalidating existential crisis — what’s the point of living our tiny lives if there’s an immortal, omniscient, infallible everything-consciousness? Who or what are we to challenge, validate, of even interpret God’s will or values? Obviously, there are a couple options, and Weeks helps guide both King and the reader through what some of those relationships with God look like.

The first hint we get is on the open page, as the credits are still rolling. After an overhead shot of the table, Weeks settles in to a middle-distance staging, evoking Leonardo Da Vinci’s “The Last Supper.”

This ends up being only a partial homage to that piece, as Weeks’ camera zooms back in for that fourth panel. If the camera had continued its trend of zooming out, we’d have roughly the same perspective on the table as Da Vinci does in his painting. And part of what happens between panels three and four is that Bruce picks a spot on the end of the table. For this to complete the Last Supper tableau, Bruce (or some other Christ figure) would have to sit at the center of the table. Look how hard Weeks works to fuck that up in the last panel. That weird looking redheaded dude sits at the center seat, and he’s a little off center.

This is Bruce, in the present, rejecting his role as Christ. Bruce Wayne cannot and does not see himself as the human manifestation of God’s will on earth. Jesus was both the son of God and God himself — a bewildering role for the foundation of Christianity. Bruce’s rejection of that role here is made all the more impactful when Weeks and King give us flashbacks to Bruce’s training days, when he aspired to be the man that enacts the will of this divine symbol he was creating.

The shape of Bruce’s body should be enough to sell the Christ imagery, but just for good measure, the exercise he’s doing is called “The Iron Cross”.

So if Bruce won’t be the Christ to Batman’s God, what the hell is he? Spencer already posted this full page, but I was moved by how much Bruce reads like a preacher in this sequence.

Look at him! He’s gesturing with with that thumbs-up-pointy finger! He’s using phrases like “solace from pain” and “hope for the eternal”! He’s rhyming “grace” with “face”! Go back and read any stretch of dialogue in here in the cadence of a Baptist or Evangelist Minister, and it all sounds perfect. Bruce is engaging in the rhetoric of faith, just as King and Weeks are, to understand both his and everyone else’s relationship to the abstraction that is Batman.

So it’s actually a little disappointing when he takes on the old costume at the end of issue. It means that for all his bluster and all his searching, Bruce is not clear in his relationship to Batman. I find the story of Job similarly frustrating — it essentially teaches that man’s will, desire, and comfort mean nothing compared to even the most trivial of concerns of God. The Devil essentially dares God to torture Job, and God does it just to prove that he can and still have Job’s love. If the moral of the story is that sometimes bad things happen and there’s no use in trying to understand the will of God, then I’m not sure why we insist on personifying the dude.

That’s what Bruce is struggling with: “Batman” took Selina away from him. Not a dude in a leather Bat suit, but the abstraction. Now he just need to define his relationship with that abstraction.