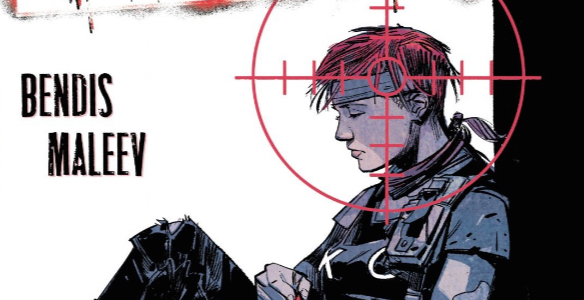 The medium of comic books isn’t an ancient indecipherable text, but it does have its own language that is learned and acquired by readers over time. Along with the significant portions of sequential art, readers must become accustomed to multiple forms of word-based storytelling. In Scarlet 1, writer Brian Michael Bendis, artist Alex Maleev, and letterer Joshua Reed showcase an additional storytelling device not often seen in comic books.

If someone is picking up a comic book for the first time they might not immediately understand the difference between the “word balloon” and the “caption box.” The former is spoken word, audible to other characters that are in the scene, whereas a caption box is a narrative device used by a character or an omniscient third party. In Scarlet 1, however, the titular character uses a boxy word balloon/caption box hybrid that forms a bridge between the two storytelling devices.

I’m not sure who to credit – Bendis, Maleev or Reed – so I’m just gonna go ahead and say it’s a collaborative effort. It’s a visually-distinct device that is also stitched into the story itself. On the previous page Scarlet provides a lengthy narration of how America has always been a shit show – something I’m inclined to agree with. But she stops midway to break the fourth wall and address the readers head on.

Scarlet doesn’t want to talk at her audience, she wants to communicate with them. This gives the use of the unique “word box” that much more significance; it’s not just a bridge between two narrative devices, its a bridge between Scarlet and the reader. 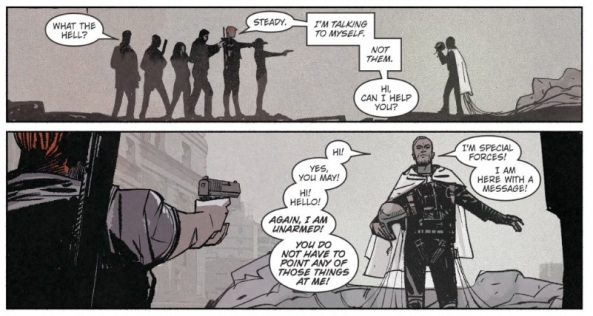 Once we become accustomed to these word boxes, the story starts bending the rules a little bit. Fearful of the parachuting soldier who enters her territory, Scarlet trains her gun on him. We see the word boxes intercut with her word balloons – contradicting/providing context to the reader that the characters don’t have. Scarlet doesn’t want her people to see that she’s afraid but she’s ok with us knowing it. After all, she’s been talking with us for most of the issue.