O, it is excellent
To have a giant’s strength, but it is tyrannous
To use it like a giant.

We tend to define power optimistically — we might list the duties of say, the President of the United States, for example, with the expectation that they’ll wield their power responsibly. But there’s another (perhaps more timely) way to define power, not by the amount of good it allows someone to do, but by the amount of harm it allows someone to inflict. Try as we (or Uncle Ben) might to link the two, power and responsibility are independent variables. That is, “With great power must also come great responsibility” isn’t a statement of some inviolable rule of the world, but a goal to strive towards. That’s why the “must also” part is so essential (and so missed from Sam Raimi’s Spider-Man) — it makes it clear Uncle Ben isn’t just stating a fact. Indeed, that power can be separated from responsibility is precisely what this first arc of Nick Spencer and Ryan Ottley’s Amazing Spider-Man has focused on, demonstrating the inefficacy of either without the other.

Actually, the other half of that equation — responsibility without power — presents another frightening reality. The world is full of Monday-morning quarterbacks lamenting how others are wielding power irresponsibly, but perhaps we owe our sense of responsibility some power in the same way we expect those in power to have a sense of responsibility. In that way, we have de-powered Peter Parker as a great example. He sees a problem with the world and a actionable solution, and he does what it takes to fix the problem, rather than just posting a long Facebook rant about how Spider-Man really should hold himself to a higher standard. Of course, “does what it takes” involves manipulating Boomerang into stealing the Isotope Genome Accelerator, but hey, he’s got to work with what he’s got.

Intriguingly, the big learning moment in this issue isn’t Spider-Man coming to appreciate the responsibilities that must also come with his power. Instead, Peter comes to appreciate at least a piece of Spider-Man’s unbridled Id. 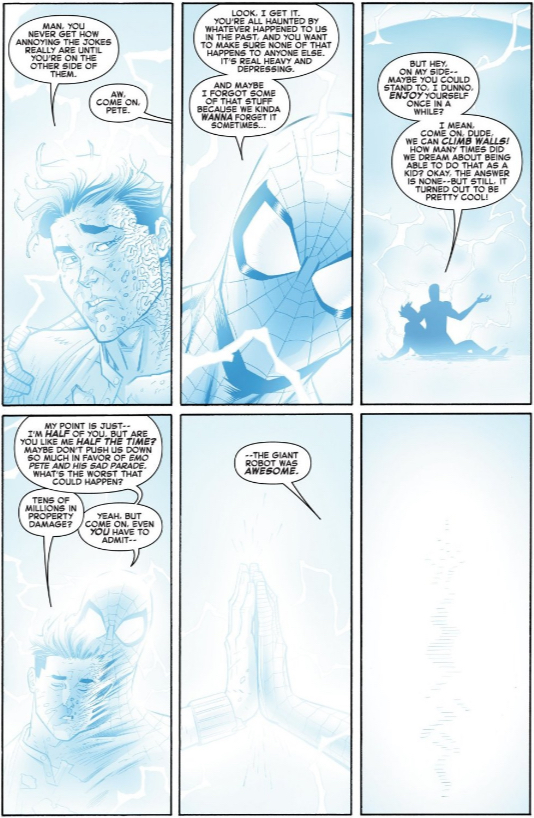 It’s a reaffirmation of Peter’s defining beliefs, but with an added “it can still be fun!” It’s an interesting addendum to Peter’s attitude, but it makes sense as Spencer and Ottley’s statement-of-purpose; this Spider-Man will be true to everything he’s always been, but he now also has permission to take things a bit less seriously. Depending on your preferences for the character, that sound like a fun release or an abdication of hard-learned lessons, but to me, it feels like a kind of necessary bit of groundwork to explain Peter trying in earnest to make things work with MJ. He needs to be at least the littlest bit selfish to want to try again, and this issue sets up that selfishness as its own hard-learned lesson.