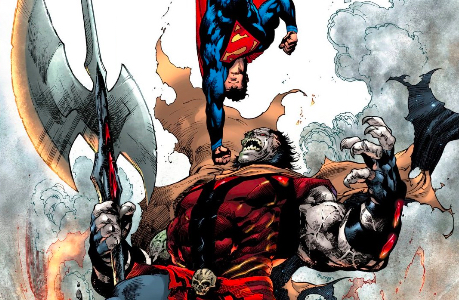 Patrick: In its abstract, the story of Superman thus far is bleak. The Earth has been stranded in the Phantom Zone, everyone on the planet is suffering from Phantom Zone-related environmental poisoning (including the superheroes), and all the scariest Kryptontian villains have teamed up with Rogol Zaar to defeat Superman. That’s pretty dire, right? This thing is even dark down to its artistic team: Ivan Reis and Joe Prado work with realistically shaped and shaded characters, which sort of insists that all of this is happening to real human beings with real human physiology. Luckily, writer Brian Michael Bendis sets aside real and relevant space in the issue to make jokes and have fun with this Superman adventure.

I’m not talking about witty dialogue or wise-cracking side characters. Those do exist in Superman 3, but that’s become superhero-standard. Where Bendis and Reis set their work apart from others is in the full-page cutaway gag. The first of these things made me laugh out loud.

And while this is funny, it’s also informative. Aquaman cues up this joke by positing the presumably-rhetorical question “…if the Earth is here, what is where the Earth was?” We get to see a lonely Adam Strange floating by an orphaned satellite, filling in the answer to Aquaman’s question: there’s nothing in Earth’s place. The gag here is goofy, but emotionally grounded, like the beginning of any good Robot Chicken sketch. We’re not laughing at Adam Strange, so much as we are identifying with the scenario – the laugh is one of familiarity. But it’s also contextually and tonally appropriate, which is the most important part.

Is it also perfectly set up by contrasting with Rogol Zaar’s preparations for war. The bad guy riles up his army, while Superman reminds his people to be good to each other, especially in crisis. In both cases, these page-long jokes are mini-stories, scenes that are enjoyable and clear, even in isolation. That way Superman’s epic fight with the ultimate Kryptonian-killer doesn’t have to feel like a singular slog to the inevitable conclusion of Superman punching him, like, really really hard. The big story is fun because the individual moments are fun, and in a story as grim as this one, that’s quite an accomplishment.