When first introduced back in 1940, Dick Grayson — then known as Robin, the Boy Wonder — was meant to provide a reference point for young readers, a way for them to see themselves in the stories they were reading. His youthful charm not only won over readers, but Batman himself, who quickly transformed from his early brooding, murderous, pulp-inspired incarnation into a more genial, bombastic character thanks to Robin’s influence. Even as modern interpretations of Batman return to a darker take on the character, Dick Grayson — now Nightwing — remains a tether to Batman’s humanity, a character who can bring out his lighter side even under the harshest circumstances. In Batman 55, Tom King and Tony Daniel highlight this vital role Nightwing fills, not just through his actions, but through the very structure of the issue.

Batman 55 is split between two stories running concurrently: a night on patrol for Batman and Nightwing, and the adventures of the mysterious Mr. Zimmerman, who ends his tale by shooting Nightwing in the head with a sniper rifle. King and Daniel immediately show the difference between what Dick represents and what Zimmerman represents by telling their respective stories in very different ways. The Zimmerman sequences are highly regimented, each and every one depicted as nine-panel grids. This seems to represent how cold and calculated Zimmerman is and how mercenary and transnational his life is, but also how isolated he’s become. Though Zimmerman is frequently in public, unless he’s buying something or tricking someone other people are just background noise in his life, drifting in and out of frame (and earshot) like ghosts.

In fact, thanks to the close-up shots Daniel employs, Zimmerman never once fully shares a panel with any other character — if another character does appear in a panel, only a small part of Zimmerman, like his arm, will appear, and never his face. Even when he’s choking a man to death, Zimmerman remains completely removed from the frame. 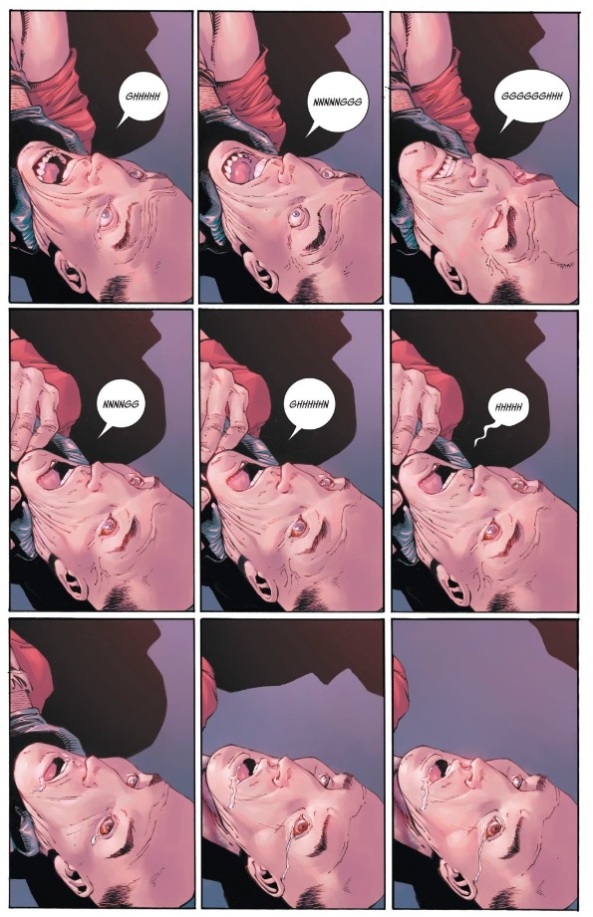 Choking is an action usually backed by some sort of passion or fury, but Zimmerman remains utterly disconnected from the action. He’s only seen as a pair of hands and a shadow on the wall, more phantom than person. He’s utterly without humanity.

In contrast, Dick Grayson is a bundle of joy. He jokes and quips, leaps from buildings without thinking, and even, on occasion, gets Batman to do the same. He couldn’t be more human, and his infectious joy and boundless energy could never be contained within a rigid grid like Zimmerman. Instead, the pages open up, with Daniel and King incorporating far more dynamic paneling, splash pages, and even some two-page spreads.