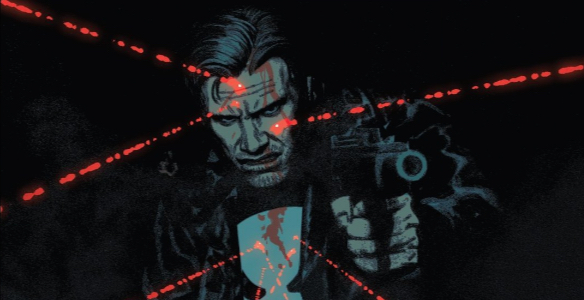 Michael: Comic book readers are probably familiar with the idea that “Batman always wins” – he’s an inevitable force of nature. I think that The Punisher is similar in this respect. Frank Castle is primarily a hunter, but when the roles are reversed he’s as wild as a cornered animal, finding any and every way to disarm opponents and escape. Such is the case in Matthew Rosenberg and Szymon Kudranski’s The Punisher 2.

Frank Castle isn’t a complicated man – at least he probably doesn’t consider himself to be. He’s got two rules: kill criminals, don’t kill cops. That second part tends to make Frank’s life a little more difficult, as he has to get creative when he is evading New York’s finest – as well as its superheroes.

Post-Secret Empire, Frank has become a little more brazen with his operations, killing The Mandarin in front of the U.N. and–in The Punisher 2–by shooting one Hydra agent and very publicly decapitating another. Thus, the time has come once again for Frank Castle to be on the run from both the bad guys and the good guys. 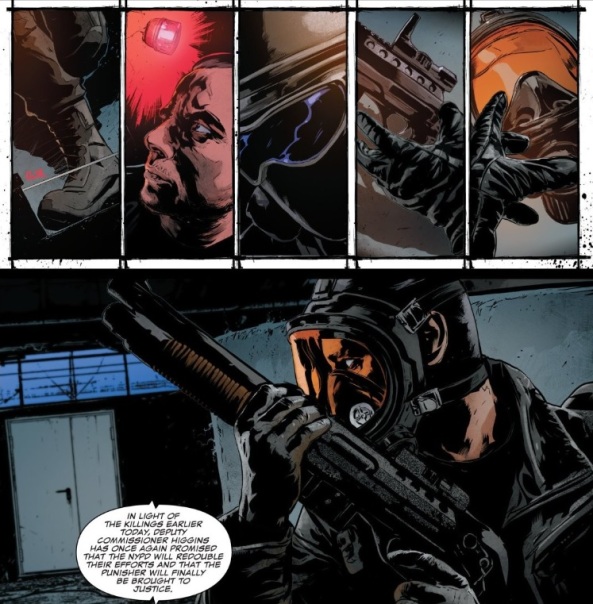 Frank is back at one of his safe houses when his alarm alerts him to intruders. Instinctively he grabs a shotgun and a gas mask, preparing for a fight. I want to say that he puts the gas mask on because he’s familiar with NYPD’s tactics but once they identify themselves as police, Frank is clearly surprised. I guess you just have to throw on a gas mask in these scenarios just in case.

He makes quick work of the SWAT team and is shortly greeted by Nick Fury’s “backup plan”: Luke Cage and Iron Fist. These are my favorite Punisher moments: when he’s outmatched and scrambles for any possible solution to debilitate his opponents. Its times like these that you see just how damn crazy Frank Castle is: he’s like a murderous McGyver.

Szymon Kudranski portrays Luke Cage as somewhat confused and entertained at the idea of Frank Castle trying to take him down with a couple of guns. Frank doesn’t need to beat Cage or Iron Fist however, he just needs to distract them…albeit with large explosions. Being a veteran marine, Frank is nothing if not a planner. But (traditionally) he was also a Vietnam veteran, making him a little more open to improvisation.

I will admit that I was just as fooled by Frank’s sleight of hand as Cage and Iron Fist were: I had to go back a few pages and see that he planted a grenade in the car’s gas can while the heroes were bantering. Frank Castle is a madman, there is no two ways about it. Kudranski pulls in tight on Frank’s wild eyes as he fires his gun off-panel. 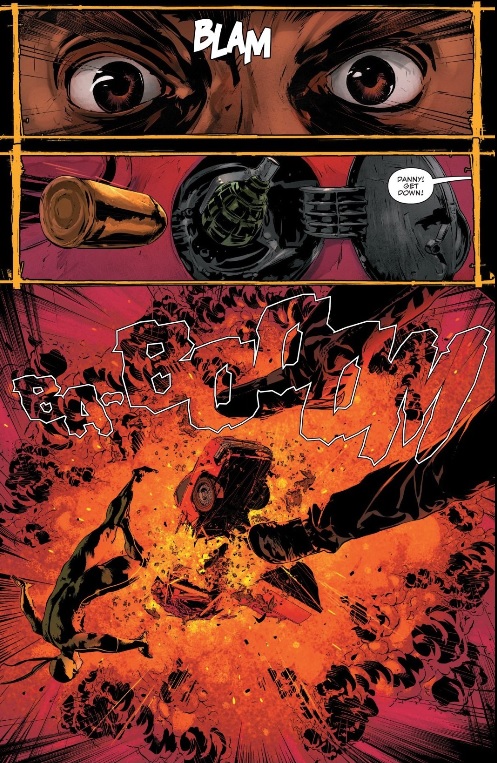 The Punisher 2 closes out with Daredevil confronting Frank on the subway, only to be surrounded by a swarm of Hand (?) ninjas. The Punisher has never been the most subtle of “heroes,” but Matthew Rosenberg seems intent on making his take on the character wild, loud and over-the-top in his executions. With Hydra going to ground it looks like The Hand wants a piece of the Frank. See? Loud.

Patrick, what’s your take? There’s not a whole lot of there there, as this issue was mostly just a series of chases but it worked for me – what about you? If I’m correct, you’re not as down for Frank Castle’s antics as I am – what do you think of Rosenberg’s take thus far?

Patrick: You got that right, DeLaney: I am not a big Frank Castle booster. I find his whole deal–those ‘antics’ you mentioned–to be morally repulsive. Even entertaining the fantasy that criminals deserve to be gunned down by a marine vet with PTSD freaks me the fuck out. Rosenberg appears to be sympathetic to some of my concerns about the character, treating his Times Square hit like a terrorist attack. The extremely public setting for this execution is treated with appropriate shock and horror. Bystanders run for cover, shouting “Gun! He’s got a gun!” and “Somebody call the police! Help!” I love that the first guy yells “gun” twice. Punisher is so violative of peace and norms that his weapon of choice is worth reacting to all on it’s own.

Rosenberg and Kudranski even do the now-familiar trope of someone taking cell phone footage of the hero-at-work, but now it plays on the news with a disclaimer about the graphic imagery. I don’t know about y’all, but that brings back memories of news articles with embedded videos from the Parkland and Las Vegas shootings. In short, the creative team isn’t letting Frank off the hook here – he’s doing something terrible, and they want to remind us that he’s a living embodiment of the specific kind of violence that seems endemic to the United States in the 21st century.

But I do see one big difference in this version of the Punisher. He’s not targeting any just group as loosely defined as “criminals”, he’s targeting Hydra operatives. Nick Fury’s assertion that Frank “kill[ed] two men in Times Square at lunchtime” conveniently leaves out the most important part: these men are part of a group that recently took over the United States. In a way, Frank is at war with Hydra and Hydra is at war with the US. These aren’t gang members or drug dealers or whatever other cast-offs of capitalism Frank used to target, these are informed, empowered bad-actors from a terrorist organization.

Which does allow me to relax a little bit and enjoy Kudranski’s acrobatic art. I love it when we just get to luxuriate in the moment-to-moment action. Michael already pointed out that dope gas cap grenade move, but I love seeing the same level of detail applied to hand-to-hand combat too. 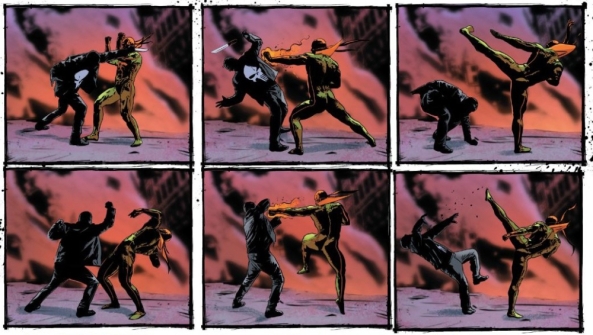 I love this kind of stuff. Forcing the reader to pay attention to individual blows in this fight really centers the narrative on Frank’s actions, rather than his abstract “mission.”

I do think it’s interesting how this issue contrasts to the first issue, wherein Frank is sort of the unseen menace. F’real, that first issue is like Predator, if, y’know, Predator was ostensibly the hero of that movie. This issue largely stays with Frank’s POV, which leads me to wonder where the series goes next. Is he a justifiable anti-hero? Or an irredeemable mass-murderer?