Why does Batman win every fight? Because he’s prepared for every conceivable eventuality. Superman goes nuts? Batman’s got magic. Or Kryptonite. Or both. This same sort of logic has been applied all to all the genius superheroes. Sure – why wouldn’t Tony Stark have armor designed specifically to fight the Hulk? Even Infinity War (the movie) depicts Doctor Strange literally experiencing all possible outcomes until he stumbles upon the one way to defeat Thanos. But those stories never really take the time to explore what that process of hyper-perparation looks like, or the toll in takes on the heroes’ relationships. Teenage Mutant Ninja Turtles: Macro-Series: Donatello shows just how damaging it is to always only prepare for disaster.

Donatello has been tinkering with the Metalhead technology, trying to develop a biological / cybernetic interface that allows him to run countless hypothetical threat scenarios. Interestingly, he’s not the only one who is interested in running those scenarios. The issue opens within one of these simulations, recalling the night Bebop and Rocksteady nearly beat Donatello to death. Of course, in this version of the attack, Metalhead has been outfitted with some defensive measures and Donny’s bo staff is electrified.

It’s the good plan Donatello never had, and with it, he’s able to turn the tables on two twelve-foot tall monsters who were there to murder him.

The twist here is that it’s not Donny running this simulation, it’s Metalhead. Donatello makes this same point later in the issue, but the only way the simulation ends up going their way is when Donatello and Metalhead work together. It’s a sweet sentiment, but writer Paul Allor isn’t content to let these two separate ideas co-exist. If Donny and Metalhead have to work together, but have to be prepared to take out any threat, that means that they have to be prepared to combat each other. I love how artist Brahm Revel visualizes this catch-22 – as a pair of technologically-powered blasts from opposite sides of the page. 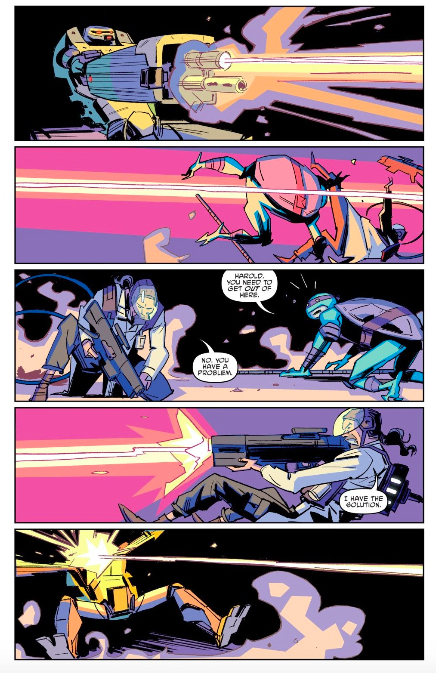 It’s the same staging of two different shots-fired, just mirrored on each other. There’s a kind of futility built into this idea. You prepare against me, and I prepare against you. Bang. Bang. What next?

And that’s where Donatello really messes up. He’s so prepared for disaster and treachery, that he’s not prepared for friendship. Donatello’s radioactive robot-power-dampening defense systems have left Metalhead in no state to fight back, and Donny gets a little too proud of himself for planning ahead. He even rationalizes aloud “as if you weren’t planning to double-cross me.” But Metalhead wasn’t planning that. Revel gives us one silent panel of the robot’s face, that somehow communicates that this killer robot feels betrayed.

Maybe it’s because it’s the first time Metalhead hasn’t been able to respond immediately with authority, or maybe it’s that this is the first time Revel lets Metalhead look directly into the camera. Whatever combination of magical ingredients, the spell is cast, and my sympathies lie with Metalhead.

If there’s a saving grace for Donatello here, it’s that he does end the issue with at least one repaired relationship – with Dr. Harold Lilja. Prepping for the future may have less to do with cracking the formula on running hypothetical scenarios and more to do with surrounding yourself with people you trust. It’s just that the “trust” part of that equation is hard, and Donny hasn’t solved for it just yet.