by Michael DeLaney and Spencer Irwin

Michael: The first arc of Donny Cates’ Venom went for bombastic action and retcon myth-making, and as fun and exciting as that was, I can’t help but find myself more interested in the more “down-to-Earth” nature of Venom 7. Cates does still add to his symbiote mythos, but this issue focuses more on the personal bond between Eddie Brock and his symbiote pal – or lack thereof, in this case.

We have seen iterations of the Venom symbiote across numerous forms of media, and while the hosts have changed the parasitic nature of the alien remains basically the same. When Peter Parker came across the symbiote, it enabled him/tempted him to indulge his id and his more selfish desires. Of course it was even worse for the less-noble, more angry Eddie Brock. With either host the metaphor is clear: the Venom symbiote is our dark side.

In Venom 7 Eddie Brock awakes to find himself a prisoner of “Project Oversight,” run by Ultimate Reed Richards himself, “The Maker.” Who exactly The Maker is or where he comes from certainly eludes Eddie, who is confused about a great many things. The Maker toys with Eddie a bit before he reveals that this isn’t the first time that they’ve had this conversation.

In addition to being a manifestation of our dark side, the Venom symbiote has also been an embodiment of addiction, especially for Eddie Brock. In this series alone we have seen how Eddie clutches desperately onto his symbiote like an alcoholic to a bottle. What struck me about Maker’s little revelation above was how Eddie’s “lost time” is akin to drunken blackout nights where you can’t remember where you were or what you did. We’ve all heard a variation on the phrase “He’s a different person when he drinks.” When Eddie blacks out however…he turns into a monster.

Eddie and his symbiote are not unsympathetic, however, as they are the protagonist of the book. There’s something touching about the way they try to protect one another, especially in the way that Maker surmises the symbiote is trying to do with Eddie. We also discover that while the symbiote is still protecting Eddie mentally and physically, it is otherwise comatose.

I gotta say that I know next-to-nothing about The Maker, but I love the idea of the an evil Reed Richards. As one of the few refugees of the Ultimate Universe (I think you could count them on one hand), Maker’s dialogue is lettered as such. Letterer Clayton Cowles makes the distinction between Eddie’s traditional ALL CAPS lettering and Maker’s lower-case structure. And while The Maker is not a fourth-wall-breaking character like Deadpool, he has a visual presence that almost bends that wall.

On multiple occasions throughout Venom 7, Iban Coello draws him exceeding the physical bounds of the panels he is in. He may not be self-aware that he is in a comic book, but by drawing him reaching through the gutters with his scalpel, Coello is making one thing very clear: The Maker is in control here.

Coello gives us glimpses into Eddie’s lost time, but the Venom he depicts is one that is a wild beast working on instinct alone. We have plenty of Venom’s green “waste product,” but there is no trademark toothy grin. Instead that evil grin belongs to The Maker — once again emphasizing who has the power in this situation. The grin peeking out of the darkness is a great visual, giving the former Reed a devilish Hannibal Lecter vibe. 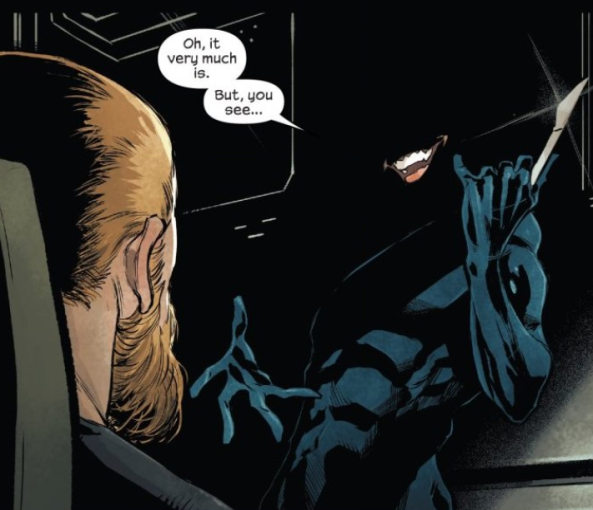 As I mentioned earlier, I am very excited to see what comes next. It was cool seeing dragon symbiotes and evil space gods, but I like that Coates is weaving Venom back into the larger Marvel Universe — Ultimate included. The mystery element of it all makes for an engaging read, don’t you think Spencer? What was your takeaway on this issue? Do you have anything in particular to say about that final page “reveal?” I read a decent about of Flash Thompson’s “Agent Venom” days, but never really knew that him and Eddie were ever that tight.

Spencer: I don’t necessarily think Eddie and Flash were tight; last time we saw them they were battling over the symbiote, which if anything made Flash Eddie’s rival for Venom’s attention. They were essentially in a love triangle, and “my partner’s ex just died” is a tricky thing to digest even when your partner isn’t an alien parasite. Flash Thompson also was one of the only other people alive who understood the things Eddie’s gone through, what it’s like to be Venom’s partner, so I’m sure that his death still hits Eddie hard even if he wasn’t particularly close to Flash as a person. Eddie likely saw a little bit of himself in Flash, I’d imagine.

Anyway Michael, I’m glad you mentioned the “mystery” element of this issue, because that’s what interested me the most about it. Readers are essentially approaching Venom 7 with the same amount (or, truthfully, lack) of knowledge as Eddie himself; Cates puts readers into Eddie’s blackout-drunk shoes, allowing us to learn as Eddie does, speculate as Eddie does, and try to solve the mystery of what’s happening to Eddie, where the symbiote is, and who’s captured Eddie along with him.

Of course, as Marvel fans and comic book readers we ultimately have more knowledge than Eddie, and Cates, Coello, and Cowles lean into that. Michael pointed out how the Maker retains his signature Ultimate Universe lower-case lettering, and that lettering is a clue given to readers on the very first page of the issue. 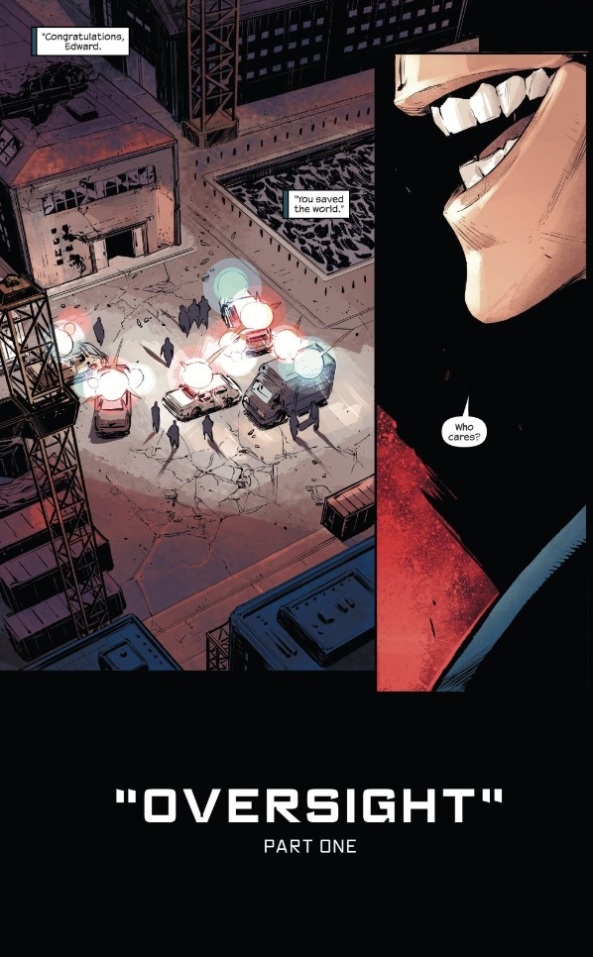 This is a phenomenal opening page. We’ve got a title, but more importantly, we’ve immediately got a mystery. There’s a shadowy figure in that second panel, establishing that the captions in the first aren’t an omniscient narrator, but someone specifically speaking to Eddie. Who is he? What does he want with Eddie, and how did he capture him? It creates intrigue from the very first page without having to actually have any characters ask those questions.

And, again, Maker’s lower-case lettering is there from the very first panel. Did you notice it? I’ll admit, I kind of halfheartedly noticed that the lettering looked different, but it didn’t hit home for me until four pages into the issue, where Eddie finally speaks in his normal upper-case lettering. Suddenly the lettering is a clue, and Cates and Coello give readers two more pages to try to work out that clue before revealing the Maker. It’s a remarkably engaging way to suck readers into the narrative.

For every clue Cates and Coello leave, though, there’s also a Red Herring to throw readers off their trail. At the end of Venom 6 readers seemingly saw Eddie’s Venom symbiote destroyed, so when issue 7 finally reveals Eddie strapped to a chair, readers probably aren’t too surprised; Eddie’s an easy mark without his symbiote. We’re no doubt wondering where the symbiote is, but it doesn’t seem like an urgent question until the Maker suddenly flashes back to Venom’s rampage, revealing that not only did the symbiote survive, but it remained bonded to Eddie. Then the question “where is it now” suddenly becomes much more urgent, especially since the fact that Eddie hasn’t tried to escape yet makes it seem like he’s no longer bonded to Venom.

Turns out, the joke’s both on the readers and on Eddie.

Yup, the symbiote’s been there all along; it’s just kinda brain-dead.

Again, this is some excellent mystery building (and solving), but it’s simultaneously a remarkable way to put the readers into Eddie’s head-space, to make us really feel the loss and absence of the symbiote the way Eddie does. From the very beginning its absence is felt — there’s no black captions, no back and forth, no rescue for Eddie, just him captured alone in some strange facility. The flashback to Venom’s rampage, though, makes us feel that absence even more profoundly by reminding us of what it was like when the symbiote was around before returning to the present and explicitly pointing out Brock’s loneliness in contrast. Because we’re so thoroughly put into Eddie’s shoes, it’s hard not to feel for him, even if we’re one of those readers who views Venom as more of a destructive addiction than an equal partner in his life.

I think that’s what ultimately impresses me so much about this issue. It succeeds at both doling out tons of exposition and making readers empathize with its lead because of its structure, which is clever without ever being flashy or distracting. Venom 7 is a truly engaging read that gives me high hopes for the rest of this arc.