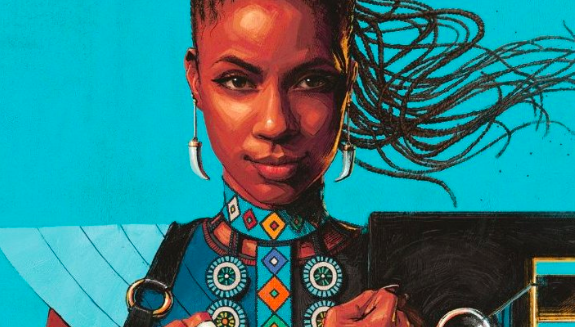 Spencer: The character of Shuri is currently riding a wave of popularity, one that can be traced back to February’s Black Panther film, and one which leads right up to this very comic, the first issue of Shuri’s first ongoing series. Despite being the breakout character in a movie full of breakout characters, though, Shuri has existed in the comics for close to fifteen years now, and has built up a history quite different from her MCU counterpart. How do you reconcile those disparate takes on the character? If you’re Shuri writer Nnedi Okorafor, you don’t; you confront each version of Shuri head-on, and make her (and others) do the same. Shuri’s journey to figure out who exactly she is and what exactly she wants becomes the central conflict of Shuri 1.

Okorafor makes no secret of this; not only does she open her author’s note at the end of the issue by saying as much, but she and artist Leonardo Romero also open up the issue itself by highlighting the many various takes on Shuri. 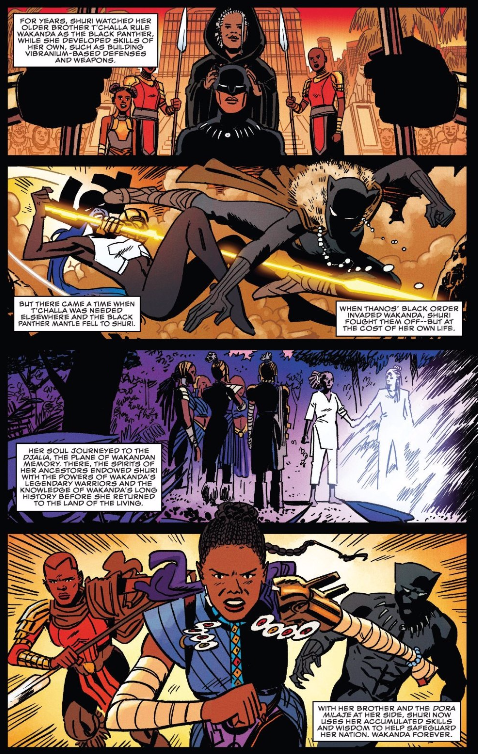 You’ve essentially got the girl genius from the MCU in panel 1, creators Reginald Hudlin and John Romita Jr.’s original take (the woman who desperately wants to be, and eventually earns the right to be, Black Panther) in panel 2, Ta-Nehisi Coates’ mysticism-bound revival in panel 3, and finally in panel 4, the first appearance of Okorafor and Romero’s Shuri.

By making this the very first page of the issue, Okorafor and Romero are reminding readers that Shuri is all of these things at once. Does that make for a cohesive character, though? It certainly could. Interestingly enough, the issue’s very first establishing shot of Wakanda reestablishes that Shuri’s home is, likewise, a nation built on contradictions and contrasts.

A flat screen television reporting on a trip to space, sitting on a table covered in traditional imagery and idols, is really Wakanda in a nutshell. Throughout its time in the Marvel universe Wakanda has always been a place defined as equally by cutting edge technology as it has its history, tradition, and mysticism, and that’s a unique niche it’s always filled comfortably.

Shuri doesn’t fill all her various niches as naturally, and that’s no doubt by design on Okorafor and Romero’s behalf, because she hasn’t quite figured out what place they all play in her life and future yet. She’s urged by Queen Ramonda and her “Elephant’s Trunk” to take up her absent brother’s place in Wakanda’s government, and the spirits of her ancestors currently floating around her head as if she’s Firestorm remind her of her magical destiny, but she seems far more interested in her inventions.

In fact, the most telling moment in the issue may be when Shuri creates a set of Nanotech wings, tests them out, then promptly retracts them in mid-air, using her animorphism powers to fly home in the form of a crow. The wings are completely unnecessary for her, but she gets joy from finding ways to help others with her intelligence, so she makes them anyway.

What Shuri 1 ultimately shows me about its titular star is that she wants two things: 1. to be able to use her genius to help others and to be appreciated for it, and 2. for others to look at her and see her for herself, not as the role they want her to fill. In a way these go hand-in-hand, because when they look at Shuri and see a princess or a sister or a mystical savior, they’re often overlooking everything else she brings to the table.

Take this flashback sequence (strikingly rendered by Romero and colorist Jordie Bellaire). Shuri saves young T’Challa’s life, and he doesn’t even say thank you; instead he resents her showing up at his training session, a place where she doesn’t “belong.” T’Challa is just as oblivious in the present day, so focused on playing Shuri’s protector by putting the kibosh on her flirtation with Manifold that he doesn’t even acknowledge everything Shuri’s done to protect him (from creating his ship to sending Manifold with him at all). He can’t see Shuri beyond the role that he’s assigned to her.

It’s a running theme throughout Shuri 1. The spirits of Shuri’s ancestors have given her a destiny she doesn’t seem all that excited about, and certainly don’t seem to care about that fact. Becoming Black Panther was, at one time, Shuri’s greatest goal, but she seems taken aback when offered the position because the rest of the Elephant’s Trunk come to the unanimous decision that she should take up the role without really consulting her or discussing it with her. Even her friendship with Muti is predicated on the fact that they don’t call her “Princess,” treating her just as Shuri rather than as someone with a preconceived role to fill.

So while future issues of Shuri are likely going to show Shuri that she’s capable of more than she realizes, teaching her how to meld her various roles into one more unified, powerful persona, they also seem poised to show everyone else — be they the people in Shuri’s life or even the readers themselves — that Shuri cannot, and will not, be put in any one box. Seeing the full extent of Shuri’s competence and potential is an exciting prospect indeed.

Michael, what’s your take on Shuri, both as a character and as a series? And do you have anything else to add about the work of Romero and Bellaire, who I am so glad to see back on a monthly title again?

Michael: I must admit that I am very much a rookie as far as Shuri goes, so that recap page at the beginning of Shuri 1 was helpful. I, like many others was first exposed to the character by Letitia Wright’s portrayal in the Black Panther movie. From that perspective I’d say that Nnedi Okorafor succeeds at nailing the characterization of “the brains” behind the Black Panther.

Being the technological hub that it is, it is no surprise that Wakanda is taking to the stars – in fact, Ta-Nehisi Coates recently did a series that re-imagined The Wakandan Empire as the predominant power in the stars. Kudos to Spencer for pointing out the juxtaposition of the modern TV set amid traditional African imagery. It’s a surreal mixture of an ancient civilization, a modern form of entertainment and the spirit of the Nixon/Kennedy eras of watching a live broadcast of a shuttle launch into space.

Okorafor slips in a bit of Wakandan braggadocio in the broadcast about how the nation is already set to be a strong power in the “space race.” Perhaps in the real world we would balk at this kind of speculation and opinion-based reporting, but come on, have you seen Wakanda? They would leave NASA in their moon dust.

I really dig the style of Leonardo Romero and Jordan Bellaire. There is straightforward simplicity that reminds me of someone like Darwyn Cooke. 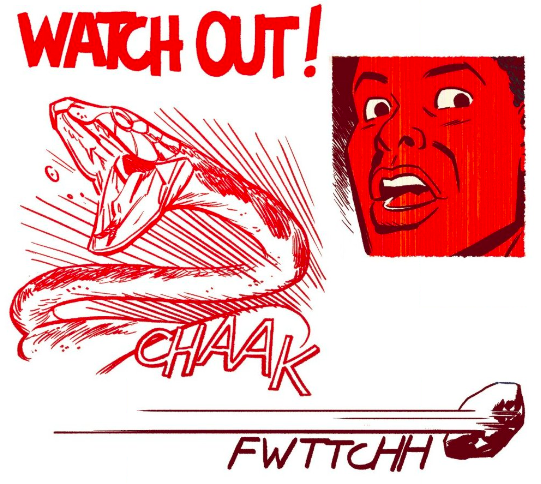 Additionally I like when artists add a unique flair to flashback scenes, such as the one Spencer mentioned above. T’Challa, Shuri and Zuai are cast in a pale white to contrast from the orange and reds of the background and foreground. The moment that the snake begins to strike however, these colors are swapped. In a flash of panic, T’Challa’s face is blush red and the background and foreground disappear to leave a blank space of white panic. 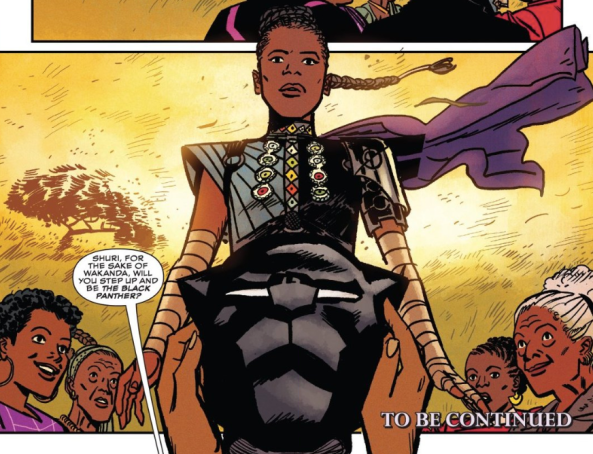 I had not thought about it this way until Spencer pointed it out, but Romero does draw Shuri with a bit of reluctance when the mantle of Black Panther is once again offered to her. All of the women around her are beaming with joyful pride, but Shuri herself is either disaffected or hiding a sense of dread.

Some of my favorite stories in comic books from DC and Marvel are those where another hero has to take on the mantle of the title character – it breathes a breath of fresh air into the series and the character, and tends to be a lot of fun. As much as I love Steve Rogers and Bruce Wayne, I really do miss the days of Bucky Barnes and Dick Grayson as Captain America and Batman, respectively.

I know Shuri’s story is “just getting started” but I can’t help but think of how fleeting and impermanent her time as Black Panther – if she indeed takes on the role – will be. T’Challa will eventually return to put his kitty claws back on, so Shuri’s tale is not “This is the Black Panther forever and ever” but rather “how once again becoming the Black Panther will affect Shuri.”

I’m interested in seeing how Okorafor handles Shuri’s reaction and actions moving forward. Once again echoing Spencer, Shuri doesn’t want to be a placeholder or stand in her brother’s shadow. The challenge is to A) see if Shuri does indeed take on the mantle of Black Panther once more and B) see how it can further develop her character before her big brother comes back from space.