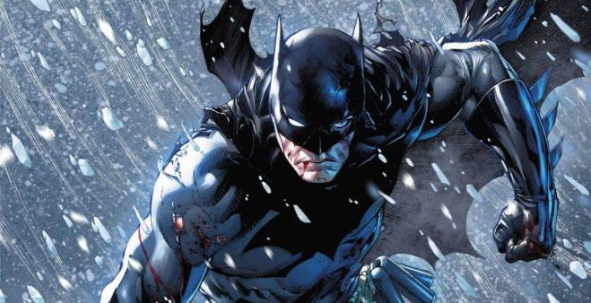 In his write-up of Batman 55, our very own Spencer Irwin highlighted the formal differences between the sequences featuring Dick Grayson and those featuring the mysterious “Mr. Zimmerman.” The Dick Grayson layouts are freewheeling and unpredictable, while “The Zimmerman sequences are highly regimented, each and every one depicted as nine-panel grids. This seems to represent how cold and calculated Zimmerman is and how mercenary and transnational his life is, but also how isolated he’s become.” Issue 56 drove that point home further, doubling down on the formal differences between the two stories (even after Dick Grayson stopped appearing). So by the time we read Batman 57 we’re pretty well conditioned to the notion that nine-panel grids = the KGBeast’s story, while anything else = Batman’s. It’s an expectation Tom King and his collaborators upend brilliantly, forcing us to question those conclusions we drew about these formal choices way back at the start of this arc.

By the start of the issue, these two characters stories have collided, forcing King and artist Tony Daniel to make the decision that their story will not be depicted on a nine-panel grid. Effectively, Batman’s will beats out that of the Beast’s. Which leaves only the flashback folktale sequences, drawn by the Fables team of Mark Buckingham and Andrew Pepoy, to follow that grid. A single opening panel suggests to us that this is a story the Beast’s father used to read to him as a boy, but the issue withholds any narrative context beyond that. Instead, we’re treated to an increasingly grim (and very real) Russian folktale, where a group of traveling animals eat each other one by one. It’s the kind of stuff Buckingham is an expert at — letting the cutesiness of a folktale lull us into a false sense of security before things become truly depraved — but I’m most interested in the layouts here.

In spite of the ostensible children’s-story-vibe, the nine-panel grid lends these sequences all of the coldness, isolation, and claustrophobia Spencer noted way back in issue 55. Indeed, the formal choices here emphasize the dark moral of the story that seeds deep distrust.

All of which is to say, we’re seeing the connection between this story and the attitudes we’re already associating with the KGBeast. But then King yanks the rug out from under us, revealing that it was actually Bruce and his father (or maybe also Bruce and his Father) that were sharing this story. That is, Bruce also has that isolation and distrust baked into his character, as well. Curiously, he seems to be fighting it in that final sequence:

It’s his father that’s pushing for the isolation — and he manages to stay isolated for much of this sequence. But Bruce’s need for comfort and fear of being alone ultimately wins out, pulling the two together in that last panel. It would be a heartwarming moment if we didn’t have a deeper context for Thomas’s “Then I have to go.” This is a kid we know is going to have loneliness and isolation thrust upon him, but seeing him rebel against it, however modestly, is nonetheless heartbreaking. He doesn’t want to live in a eat-or-be-eaten world, but that world keeps pulling him back, anyway.