Patrick: I love the Teenage Mutant Ninja Turtles, but part of that love comes from my now-decades-long exposure to them. I can look at any one of these four brothers and see a multifaceted, well-rounded character. This is in spite of the fact that they were introduced to me in a cartoon theme song that was content with describing Raphael as “cool, but rude.” And, to be fair, they can be tremendously fun characters, even when boiled down to archetypes. With that in mind, it’s fascinating to see how writer Ian Flynnn and artist Michael Dialynas craft a story the requires our hero to be so much more than a party dude.

Of course, the team doesn’t want to lose any of that party dudery, so they reassert it with a beautiful splash on the first page.

I love everything about this drawing. More than being just a party dude, Mikey is straight up performing here, dazzling a bunch of kids with the kind of acrobatic clownery only he could deliver. Check out Dialynas’ subtle redesign for the character too, which gives Mikey these long orange sleeves and tights with minimal padding. All of the turtles have some version of these sleeves in this issue, but both the bright color and the lack of utility sets Mikey’s look apart from his brothers. Leo’s got some black piping on his, and Raph’s sleeves are almost entirely obscured by protective pads.

Dialynas also draws Michelangelo’s head with a little more emphasis on the roundness of his face. Mike’s the only Turtle afforded those adorably large and expressive Dialynas Eyes.

He’s the emotional center of the group, and while a long-time fan like me may not need to be reminded of that, this introduction makes that point loud and clear.

And already in this early characterization, we’re getting something more than “kid who likes to have fun.” Michelangelo is an extremely empathetic character, and all he wants is whats best for the orphans that now find themselves in the care of the Foot Clan. That empathy leads Michelangelo to a dark, angry, desperate place. Appropriately, the creative team follows suit, altering the issue’s pacing and aesthetic choices based on what emotion Mikey is tapped into. When Mike invades the foot compound to rescue the kids, the action is surprisingly fluid and the look on our hero’s face is straight-up mean, evocative of an old Eastman / Laird drawing.

Don’t worry kids! He’ll pop back in to good-time-Mikey when he knows comforting the orphans is more important than kicking ass. But for the moment, he’s stalking around, taking out Foot Soldiers like he’s Solid Snake (And that red exclamation point over the soldier’s head in the second panel is a nice little nod to Metal Gear Solid – it sells Mikey’s bad-assery, while sticking with the language of absurdity).

The real kicker is that Flynn and Dialynas make Michelangelo’s ability to tap into the scarier design elements of TMNT necessary to his success in this issue. The story comes down to a confrontation with Master Splinter, and no amount of petulant teenage rebellion will sway his father’s heart. Mikey tries all the best teenager moves: telling his father he’s worse than Shredder, saying “screw you” and then doubling down on it, even declaring that Leonardo is his master now. That’s basically: “I hate you, fuck you, you’re not my dad anymore”. That’s not enough. It takes violence to get Michelangelo’s point across. Dialynas shows a real mastery of time, space, weight and motion during this fight sequence between father and son.

My god, I love those sound effects. You can hear the dry knock of Splinter’s cane on Mikey’s ‘chucks and the cold metallic CLANG as Mikey lands shell-first on the giant metal pipe.

Spencer, I’ll let you explore the strengths of Dialynas action storytelling, but I wanted to leave you with a few other questions. What do you think it means that Michelangelo has to be driven to violence against his family, even though that’s something he expressly said early in the issue he didn’t ever want to participate in? Also, does Splinter let him win because Michelangelo proved his value in the very narrow definition of the Foot Clan (i.e., if you can fight, you are valued)? Or did he just see that he was losing the hearts and minds of the orphans by hurting their friend? Mikey “won,” but how did he win?

Spencer: Y’know, Patrick, both those readings are rather uncharitable towards Splinter, but I suppose that lack of charity is certainly justified. Michelangelo 1 paints Splinter in a rather harsh light, but I do think it eventually comes around and finds his softer side again, right around the same time Splinter himself does.

Michelangelo himself suggests that he simply knew that his father loved him too much to truly hurt him, even if it took him some time to remember. Scenes like the one above, and like the sad glance Splinter gives his sons in the issue’s final panel, seem to confirm Mikey’s hunch. What this will mean for Splinter, and for his relationship with his sons, going forward remains to be seen, but it should be interesting to see if he can find a way to balance his family with his sense of honor and duty.

(I understand, Patrick, how you came to your conclusions. On the page where Splinter calls off their fight, he glances from Mikey to the scared orphans before announcing his decision. That could easily, and validly, be viewed as him thinking about the effect the fight was having on the orphans [his future soldiers], but I think seeing those orphans reminded him that, just like those kids, Mikey is a child, his child, and that it’s unthinkable for him to be fighting his son.)

It’s that idea of honor that interests me most about this issue, because it really seems to be the root of both Splinter’s and the other Turtles’ issues with each other. Splinter is seeing himself as a Master before a father, the Turtles as his underlings before his sons. Leo’s conviction in his and his brothers’ actions, meanwhile, is completely undermined when Splinter accuses him of being disobedient, even though he thoroughly believed that he was in the right at the time. 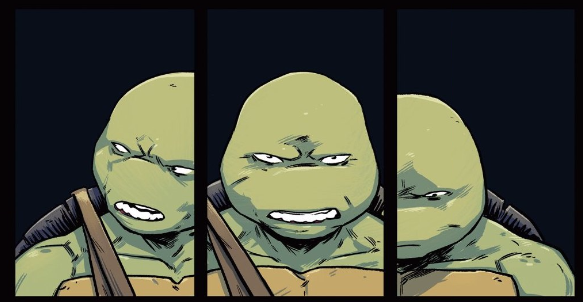 Even Donnie and Raph, though not happy with Splinter’s arrangement, seem resigned to having to follow his orders simply because he’s their father. It’s only Mikey who is truly holding morality higher than honor, and is willing to go to extreme measures to live up to his innate sense of right and wrong.

Maybe it’s just my anti-establishment side coming out, but it’s that morality that makes the Turtles more than just order-following ninjas or soldiers (and teenage mutants too, I suppose); it’s what makes them heroes, and that may just make Mikey the most important member of their ensemble, especially as they continue to forge a path separate from their father’s.

Patrick raises an interesting point when he asks what it means that Mikey is forced to use violence against his family, something he said he never wanted to do, to achieve his goals. Mikey does say that he was pushed to his limits, and I think, at least in part, that Flynn intended this to show how far Splinter had fallen, how extreme the situation had to get for him to come to his senses. It certainly shows that Mikey is willing to sacrifice his own comfort to protect those less powerful than he, which I suppose is a more evolved, more just form of the honor is family is so proud of. 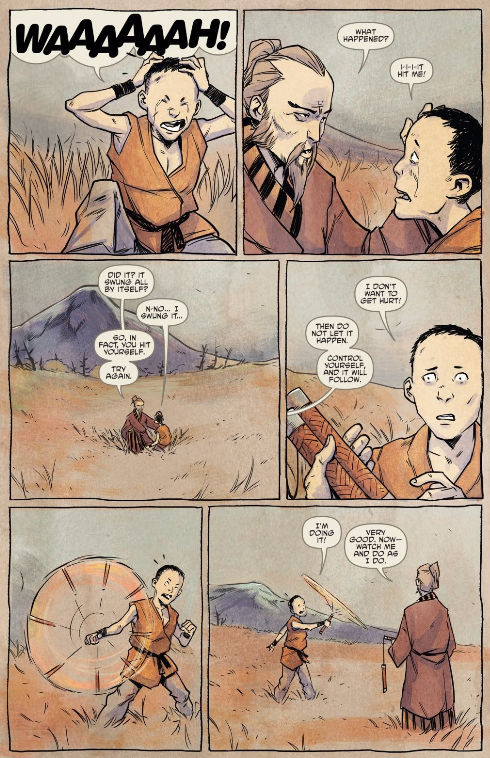 But it also makes me think about this flashback sequence. Mikey has fond memories of this moment, planning on “raising” the orphans the same way Splinter did him. It’s sweet, and there’s certainly a softer side to Splinter in this scene, but it still shows that Mikey was raised, not only to be strictly obedient, but to wield violence as a tool. No matter how badly Mikey may not want to fight, it’s not a surprise that he’ll still resort to violence when forced to. Honestly, given his upbringing and history, it’s remarkable that Mikey’s become as soft-hearted, and yet as willing to rebel, as he has.

We may cringe at Mikey and Splinter being forced to fight each other, but as Patrick pointed out, their fight itself is beautifully choreographed by artist Michael Dialynas. 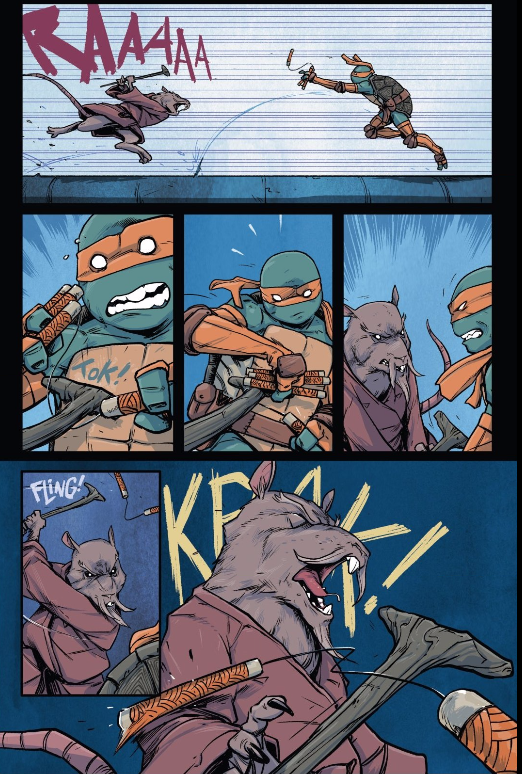 The sequence shines for a number of reasons. First of all, Dialynas and Flynn use Mikey and the orphans’ escape to establish the setting before the fight actually begins, adding some specificity and familiarity to the proceedings. I like Dialynas’ choice to have the entire fight move from right to left, giving it a sense of momentum and eventually making it so that Splinter has Mikey up against a wall as literally as he does metaphorically.

Most importantly, I appreciate Dialynas’ and Flynn’s choice to break the fight down to pretty much one movement per panel, with each movement influencing the one that comes next. It’s not just a random flurry of blows, but a logical progression, a battle that can be easily followed. It’s thrilling and propulsive, yet another stellar battle in TMNT‘s long list of stellar battles.

While not action oriented, I also enjoy how Dialynas and Flynn depict the Turtles without their masks as the issue opens. It shows Mikey and his brothers trying to be more open and personable around the orphans, how far they’ll go to comfort (or not scare) them. It also emphasizes, though, how comfortable the Turtles should be; their father’s home should always be a place where they can take their masks off and just be themselves, but it no longer is, and eventually Mikey is forced to mask up and infiltrate that very same home on a rescue mission-turned-battle.

While this is a terrific spotlight on Mikey and his good-hearted heroism and morality, Flynn and Dialynas never forget the tragedy at the core of this family vs. family dynamic, and that elevates an already great issue into something complex, heartbreaking, and special.