Patrick: I’ve worked a 9-5 job for the majority of my adult life, cramming the entirety of my creative life into nights and weekends. When I take a vacation, it’s to attend conventions where I’m going to network and land interviews and get first hand experience with the newest talent and products in the comics and video games industries. In effect, I’m always working. But I do it because I love it. In fact, after a weekend of writing and performing and expressing myself creatively, coming back to the office is soul crushing. It’s the most mundane form of existential prison. Ben Blacker and Mirka Andolfo’s Hex Wives 1 explores that same kind of prison as it restrains a coven of immortal witches. It is simultaneously as exciting and as frustrating as it sounds.

The issue is basically split up into “before” and “after” sections. In the “before” portion, which smartly takes up the first half of the issue, a coven of witches wages unending violent war with the Gabriel family. Maybe “war” isn’t totally accurate – the Gabriels are always the perpetrators of the violence and the witches always defend themselves. Those defenses are usually soaked in gore and fire, emphasizing the women’s connection to their dark lord’s infernal powers. 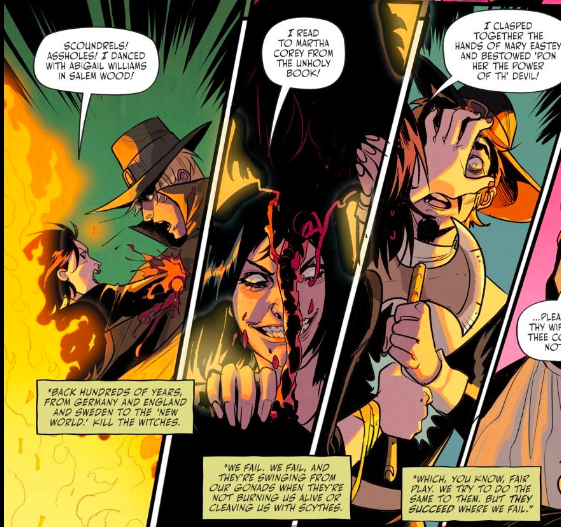 This is important. Violence and Satanism are the only way Isadora, Nadiya, and Rebeckah can ever actually express themselves. Blacker and Andolfo never show us the witches in moments of peace. Whenever we get something close to peace, some kind of violence is nestled on the same page, such as when Nadiya and Isadora are sleeping naked together. 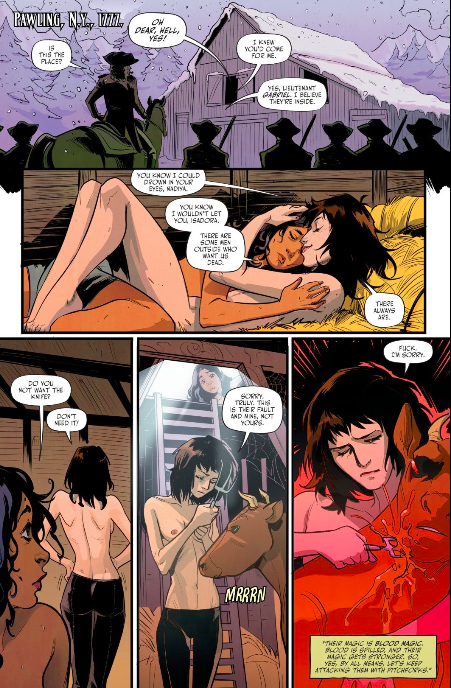 I’m all about a story of two queer witches annihilating taboos both spiritual and sexual, but we don’t get to sit with that story for long. It’s right into stabbing cows in the throat, and the threat of the dudes at the barn door literally hangs across the top of the page.

But no matter how much of a threat the Gabriel family poses, our witches come back year after year, decade after decade, century after century. The first half of this issue skips from 1692 to 1777 to 1873 to 2005. So even while they’re being hunted and killed over and over again, there’s a certain freedom to the witches’ story – they fight, and discover their power, and find sisterhood with each other. Sure, it’s violent and awful, but it’s boundless, spanning lifetimes and history and geography. By contrast, the second half of the issue takes place over the course of one weird morning in one weird town where our all-powerful witches don’t do a single goddamned magical thing.

I love the way Andolpho announces this mundanity: the nine-panel grid. 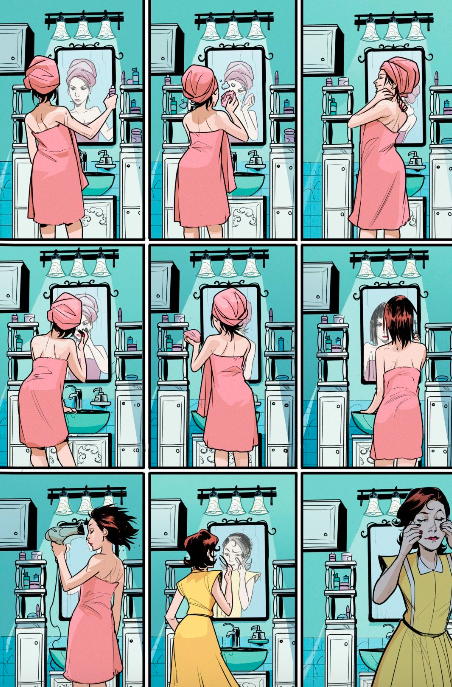 This is the only time we see this layout in the issue, and it announces loud and clear that Isadora is trapped. This is a character we’re used to seeing impaling dudes on broomsticks and bare-chested, covered in blood. Here, she’s clean, and modest, even when she’s by herself – it’s such a far cry from the same character like five pages earlier: 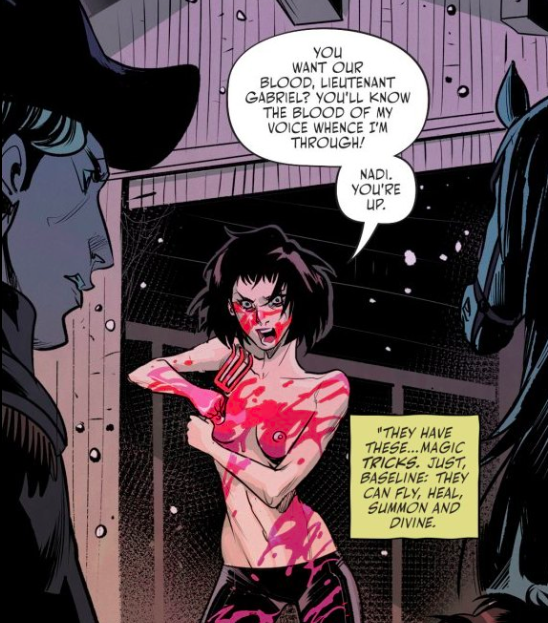 The nine-panel grid is an act of comic book formalism – a restrictive format built out of tradition. That’s how the creative team introduces us to the coven’s new prison: domesticity. Rather than conquer them with violence, the Gabriels simply married their enemies. They are pacified with coffees to drink, cakes to bake, and homes to tidy.

It’s an abrupt shift that left me yearning to get back to the hellfire halcyon days of murderin’ Gabriels. Michael, did you like seeing the latent powers of each of the witches coming through in their hum-drum Stepford lives? And what do you think about the choice to not really characterize the villains? Blacker gives the running narration to the Gabriel family throughout the first half of the issue, which implies a level of intimacy between the reader and the villains. But that’s all discarded in the back half, as if Blacker is allowing us to connect the dots between our own expectations for life in the patriarchy and what’s happening to these poor women. “Oh shit,” you’re meant to say “that is a prison.”

Michael: I think that the choice to not fully characterize the villains was wise on Blacker’s part. A book like Hex Wives benefits from the cultural consciousness of “witch trials.” Whether it’s from novels, movies, history books etc. we know the language of this type of tale: women being persecuted for their faith by their white males oppressors.

We don’t really need to know much more about the Gabriels than that for the moment – besides, who needs more stuffy old white men? While Aaron Gabriel’s narration weaves throughout the first half of the issue, the focus is on the witches themselves. After all, they are the Hex Wives in question.

In fact Gabriel’s exposition, which lays out the general “rules” of these witches, ends up tricking the readers into a false sense of security – at least for me. 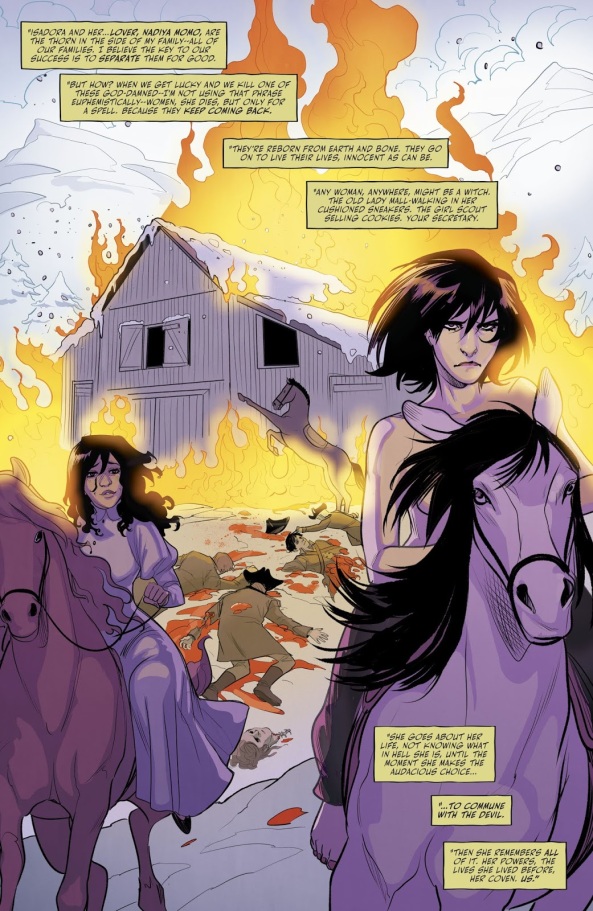 They kill, they die, they are reborn and eventually remember who their true selves so they start the cycle all over again. Over the next several pages Blacker and Andolfo take us through multiple reincarnations through the decades, including the Gabriels plotting by the fireplace. After the three year time jump we find ourselves in Stepford territory, with the witches domesticated to be model housewives.

Following the timeline we have been presented up until this point, I had assumed that the witches had simply not yet remembered their true selves. But as Isadora’s day goes on and things become progressively more creepy and robotic, it’s clear something is up. This is 2008 not 1958 – or it’s supposed to be. No wife was that June Cleaver anymore.

Besides the California wildfires raging in the background, we don’t get a good look at the world outside of their neighborhood. But it looks like whatever spell that the Gabriels have crafted hasn’t just affected the minds of the witches but their physical surroundings. For example Rebeckah’s husband drives away in what is clearly a 1950s-inspired Chevrolet. 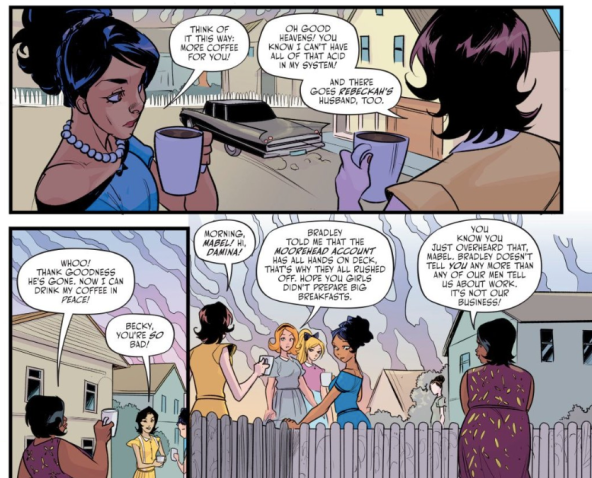 What else is fabricated? Are all of the wives witches? Are some of them spies to keep an eye on them? My guess is that Mabel’s step-daughter Damina isn’t real.

Throughout all of this recipe-swapping, pristine dusting and cigarette-sneaking, I am waiting for Isadora to remember who true identity and start seriously fucking shit up…but it never happens. There is a moment where Blacker and Andolfo tease such an awakening, but it appears that Aaron intervenes.

As Aaron mentions earlier in the issue, the witches rely on “blood magic.” When Isadora drops the martini glasses she begins to pick them up by hand. At that exact moment the phone rings and she stops what she’s doing. 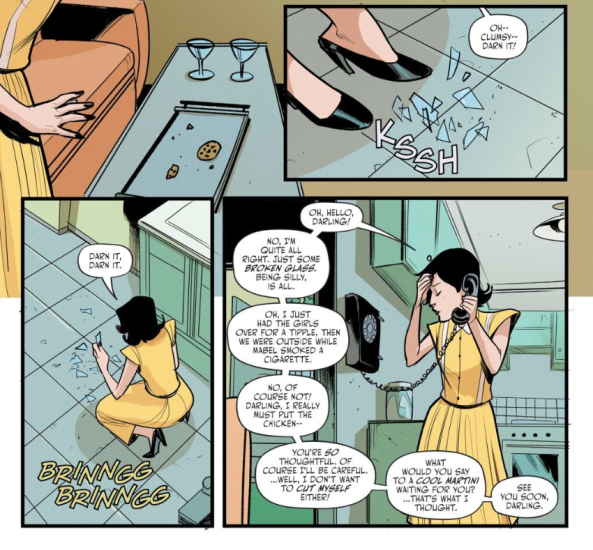 We don’t hear the other side of the conversation, but it’s clear that her “loving husband” is making sure she is extra careful when she cleans up the broken glass – don’t want any blood spilled and awaken any witches, after all!

I really dig this concept, especially through the lens of the modern-day attack on women by establishment Republicans. These are the kinds of stories that comic books excel at: allegories for real-world problems that add supernatural elements without sacrificing the importance of the message.

The Gabriels have devised the perfect prison for their witchy foes: domestication. This is the embodiment of “get back in the kitchen.” And really, with all of the ways that the GOP are trying to put women down, can you tell me that their ideal woman ISN’T the June Cleaver type that Isadora has become?