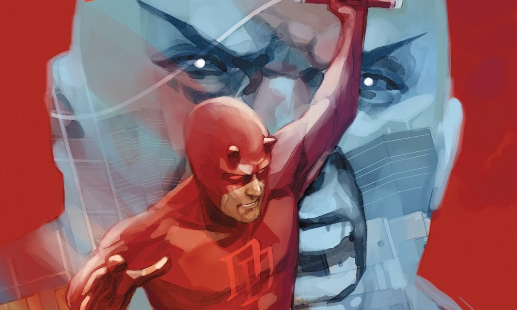 Spencer: “Why is Elektra here?” It’s a question Charles Soule and Phil Noto introduce as their cliffhanger at the end of Daredevil 609, then promptly dismiss on the very first page of Daredevil 610, never to be addressed again. 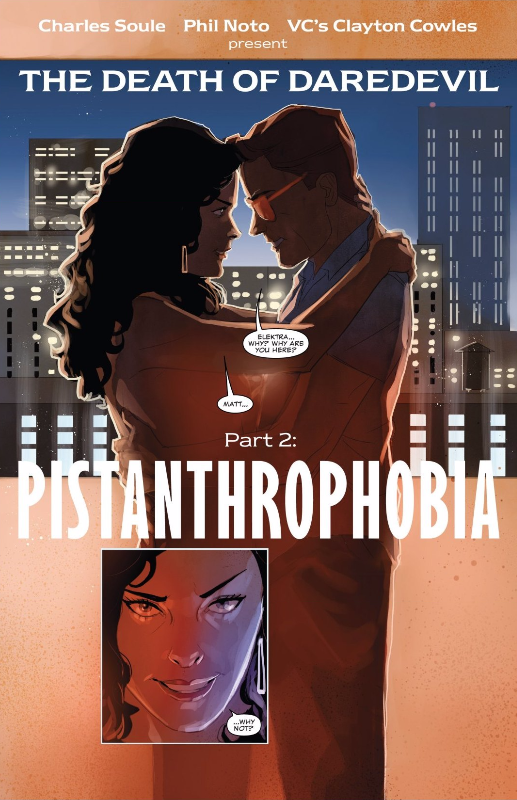 Elektra ends up being a rather minor part of the ongoing stories (both Matt’s “death” and his crusade against Mayor Fisk) even as she plays a prominent role in this single issue, appearing on all but one page. It’d be easy to chalk Elektra’s story up to Soule wanting to play with the character, an integral bit of the Daredevil mythos, a bit before bringing his run to an end, but I don’t think it’s that simple. Despite Elektra’s (non)answer, there are enough hints, inconsistencies, and strange coincidences surrounding her arrival to raise anyone’s suspicions. “Why is Elektra here?” is an answer practically begging to be answered.

Matt wants to see Elektra so badly that he takes her “why not?” at face value — if he questions her, she might leave, and that’s the last thing he wants. 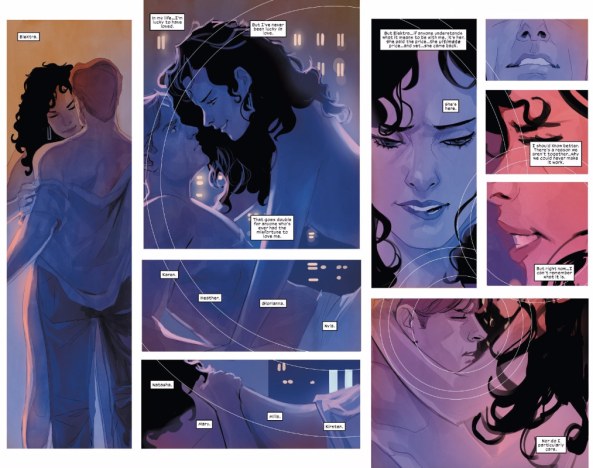 Elektra is Matt’s dream woman. I don’t mean that in the sense that they’re a perfect match or soul mates, but in that she’s the kind of woman who takes over his mind and fulfills his every wildest fantasy, a woman he desires so much that he’ll allow himself to overlook their irreconcilable differences until they’re hitting him smack in the face. Noto is integral in selling this aspect of their relationship, capturing their passion and chemistry in the above scene better than probably any live-action couple could have. Noto’s art is always shiny and dreamlike, but especially when it comes to Elektra, who is shown throughout this sequence from Matt’s perspective (powerful, sexy, desirable — again, his dream) and often shrouded in haze, or even a halo of light, throughout the rest of the issue. She almost seems unreal, or at least too good to be true.

And then, all of a sudden, she isn’t. Elektra tries to kill someone, Matt remembers why they can’t be together, and she bids him farewell, as abruptly and mysteriously as she arrived. 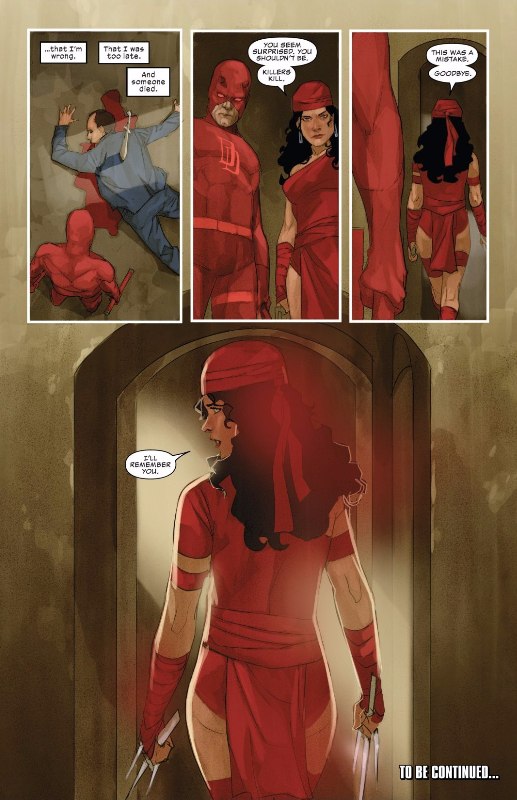 “I’ll remember you” is just slightly off-putting as a farewell. One could justify it as her deciding that they’ll never see each other again, but that finality is suspicious in an arc called “The Death of Daredevil.” She almost certainly knows something Matt doesn’t.

The even bigger elephant in the room is the fact that Elektra knows Daredevil’s secret identity. Last time Soule used the character she didn’t, and as far as I know, she hasn’t learned it since (if she has, it wasn’t within the pages of Soule’s Daredevil). I suppose Matt could have told her off-panel, but Elektra would absolutely have some sort of extreme reaction to relearning that information, and Soule doesn’t feel like the kind of writer who would disrespect the character by shuffling that sort of confrontation off-panel.

So let’s sum up: Elektra shows up, unprompted and unexplained, almost solely because it will please Matt, knowing information that she shouldn’t, then wanders off as soon as Matt decides he’s outgrown her. I suppose there could be a few explanations for this, but given the nature of this storyline, one immediately pops to mind: the whole thing is a dream, a deathbed hallucination of Matt’s.

The new villain, Vigil, feels like another hint pointing in this direction. 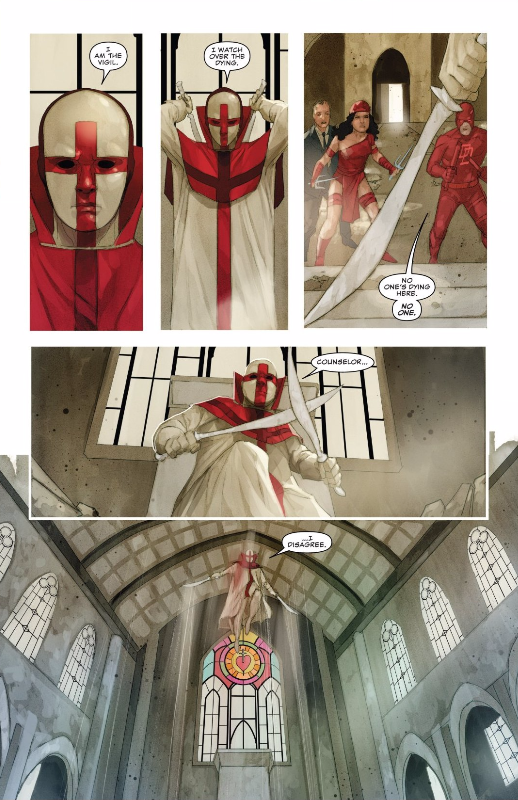 Doesn’t this design just look like it’s ripped straight from Matt Murdock’s subconscious, stitched together from Matt’s Catholic guilt? He claims to “watch over the dying” — perhaps Matt — and then refers to Daredevil as “counselor,” implying that he too knows his secret identity by making a lawyer reference. Matt comments on none of this — almost like he’s incapable of noticing, because it would destroy his reality — but it’s all suspicious, especially all together in a single issue like this.

I’m honestly not sure how fond I am of the idea of this all being Matt’s deathbed hallucination (or something like that), but, at least to me, that seems to be where all the evidence is pointing right now. Even if that’s not the exact scenario we’re facing, something fishy is going on here, for sure. What to you think, Patrick? And I didn’t get to comment on the issue’s actual plot much, especially the (failed) kidnapping attempt on Wesley. Do you have any thoughts on that?

Patrick: Oh, I’d say they succeeded in kidnapping Wesley. They just failed to get any information out of him before he was killed. The kidnapping was so successful, in fact, that Soule and Noto don’t even let us see how they pulled it off. We join halfway through the getaway portion of the heist. I love this kind of shorthand – not only does it skip past the parts of the story that the reader’s imagination can fill in just fine, it goes a long way toward selling the competence of this team. Matt’s stated plan is “We swoop in, we get him, we go surgical. No complications.” Upon the page turn, Noto reveals what Matt’s narration can only describe as “Complications.” 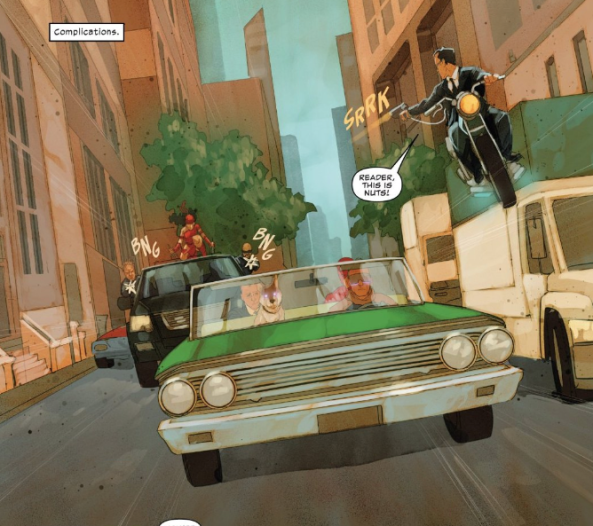 Spencer may be right — that this whole story is a Jacob’s Ladder scenario — because Matt appears to be dreaming up some very wacky, very tidy adventures for his team. I love the rigidity of Noto’s flat-lens geometry in this panel. He’s not warping any part of the camera’s perspective to get all five heroes, Wesley, two of Fisk’s goons and both vehicles all into one panel. The hard parallel lines created by the trucks and buildings on the dense city streets provide an extremely concrete presentation, at least a little bit at-odds with Spencer’s read of Noto’s drawing as “dreamlike.”

But that may be because Soule’s writing at this point takes up the charge. Reader, a blind Inhuman, is driving the getaway car by looking out through his dog’s eyes. Frank buzzes around in a hovering motorcycle and Elektra leaps balletically from car to car. The team is firing on all cylinders. Everyone, that is, except Daredevil, who spends the entirety of this scene talking to Wesley in the backseat.

Even once the Vigil shows up on the scene, Matt is completely ineffectual. Reader saves them from the impact of the car flipping over, Elektra blocks the first bone-knife tossed at Wesley. All Matt contributes is taking a knife to the shoulder and having his radar sense go on-the-fritz. Matt doesn’t even land a blow on the Vigil – that’s all Elektra. The only thing Matt physically accomplishes in the last 12 pages of the issue is preventing Elektra from killing the Vigil.

So, Spencer, I’ll see your deathbed-hallucination theory and raise you to post-death-haunting. I think this story is happening, but Matt Murdock is not physically there. Maybe Matt is on his deathbed, and his senses are elevated by some DMT-fueled near death state, so he’s able to perceive all of this without actually being there. Elektra knows Daredevil’s identity because he is dying, and the rest of Matt’s team accept Elektra into their group for the same reason Soule and Noto use her here: she was an important part of Matt Murdock’s life. This re-characterizes Elektra’s “I will remember you” to mean that Matt’s influence will have a lasting effect on her. We saw that effect first hand – she didn’t kill Vigil. To the reader, and maybe even to Daredevil himself, it may look like Matt vaulted across the room to stop her, but I think she staid her own hand, move by Matt’s no-kill morality.