Patrick: What makes an audience try to see heroism in their anti-heroes? We all try to do it. No matter what Don Draper does, no matter who he hurts, we want to believe that there is some kind of moral or narrative victory in him achieving his goals. Is that just how we relate to protagonists? Or is the protagonists’ own buried desire to be good, to be morally right, more compelling than the villainous actions we see them undertake? Donny Cates and Dylan Burnett’s Cosmic Ghost Rider 5 sees the titular character making a heroic stand at the end of a failed timeline, but ultimately confirms what we should have known all along: Frank Castle ain’t no hero.

And, when I say “we should have known all along,” I mean that Cates and Burnett tell us this on the first fucking page. 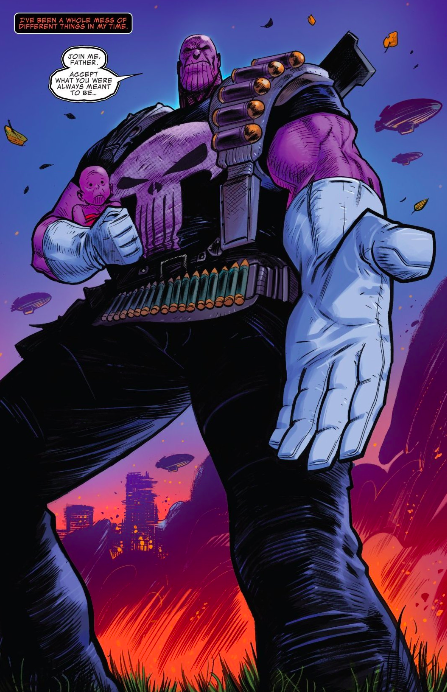 This page is fascinating. It kicks off a bit of narration from Frank that traces through all of the various horrible things he has been throughout his immeasurable lifespan. That narration includes a crucial “but” — a suggestion that there is something he can do to rebalance the scales in favor of heroism. Frank takes four pages and thirteen panels to reason himself to this conclusion, but Thanos is able to make his whole point in one sentence. What’s more, Burnett places the camera super low here, effectively placing the reader right behind Frank’s eyes. So for as much as Thanos is telling Frank to “accept what [he] was always meant to be…” he’s really telling the reader. Space Motorcycle Murder Ghost is a bad dude. That’s a truth that Thanos is offering us, hand outstretched.

This first page is drawn all the way to the bleed. The majority of the issue honors strict gutters, with only the odd emphasis panel going alway the way to the edge of the page. The first of those emphasis panels following this opening splash is when Frank rejects Thanos’ outstretched hand, and by extension, his explanation of Frank’s role in this world. 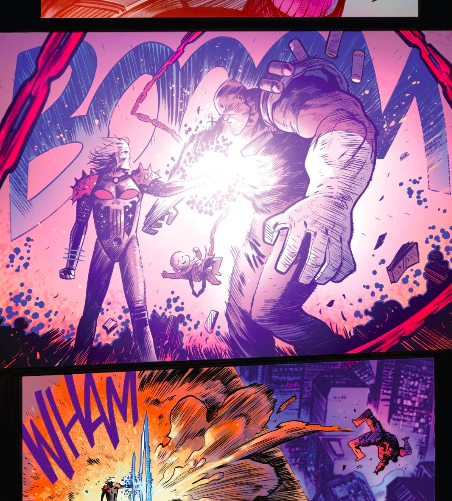 I included the bottom of the previous panel and the top of the next for a couple of reasons. First so we can actually compare the effect of letting the image bleed all the way to the edges of the page, and second, so we can see that Burnett is also introducing some non-parallel lines as panel dividers. Prior to this point, the panels are all perfect rectangles, orderly and just-so. It’s subtle, and it doesn’t last long, but those slanted lines and askew panels are telling the reader that something is off.

But it doesn’t feel like something is off. It feels like Frank is embracing the destiny you sorta assume Cates and Burnett have been driving toward all along – saving the day. It’s astounding just how much it looks like is doing the right thing. Cates gives him a cool monologue about how much he has to physically restrain himself from destroying worlds simply by existing on them. That’s Frank’s shit talk. And he’s able to reduce Thanos to a doubled-over, naked mess before… I don’t even know what he does here, but Burnett makes it look all kinds of awesome. 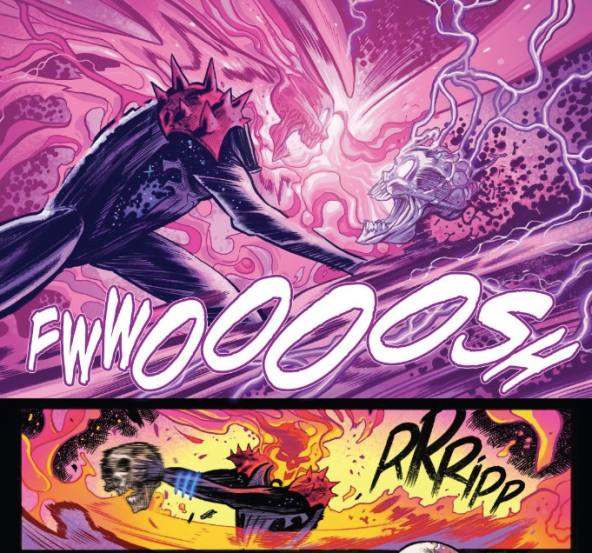 Again, check out that obliterated gutter on that first panel. This is just Frank showing off a strength he’s evidently always had, the power to kill Thanos.

And it’s the verb in that clause that actually makes this Frank Castle’s lowest point. Kill. The one thing he set out to do was teach Baby Thanos that killing was wrong. But, like, what else was Cosmic Ghost Rider supposed to do? Burnett’s panelling returns to right angles and rectangles, even as the issue heads for false ending, and father and son ride off into a not-sunset sunset. 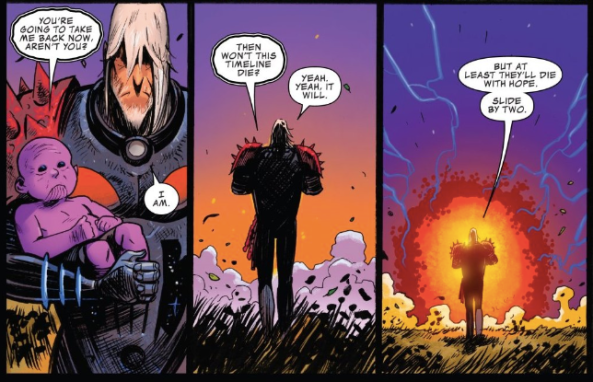 It’s in the epilogue that Death herself confirms exactly how Frank failed. In fact, Death’s a little more definitive than that: “Once I have chosen a being as my living instrument on the mortal plane, I’m afraid their path is set in stone.” She’s talking about Thanos, but the same can be said for Frank. He will never not be a killer. So while the issue ends with Frank getting on his space chopper and seeking redemption, I’m not super hopeful he can ever find any.

What do you think Michael? Is it too damn late for a character that is both Punisher and Ghost Rider? (And is also in space?) We’ll see more of Frank in the upcoming Guardians of the Galaxy series, so he’s at least heading into the right franchise to make that conversion.

Michael: Is it too late for this particular Frank Castle? Probably? Donny Cates has crafted a Frank Castle that is nearly identical to the 616 Punisher that we know and sometimes love. However I would argue that this Frank is a little more nuanced than the skull t-shirt-wearing killing machine that we know. That could be because of all of his cosmic experiences with Thanos and Galactus or simply because he’s older.

The “Old Man Logan” treatment is probably applied to too many characters these days but there is something appealing about the concept, hence The Dark Knight Returns. Cosmic Ghost Rider Frank reads like an old gunslinger who keeps getting called back into action. Frank Castle originally hails from NYC but the way he frequently throws out the word “boy” you could be forgiven for mistaking him for a wise old cowboy laying the smackdown on his “son.”

Patrick is correct in stating how we like to ascribe heroism to even the most irredeemable of antiheroes – I think an essential piece of our humanity includes us trying to find the humanity in others. More likely however, we seek out the humanity/heroism in characters who do despicable things because we hope to be redeemed ourselves. By and large most of us aren’t vigilante murderers but the universal desire for personal redemption – on any level – is very strong. 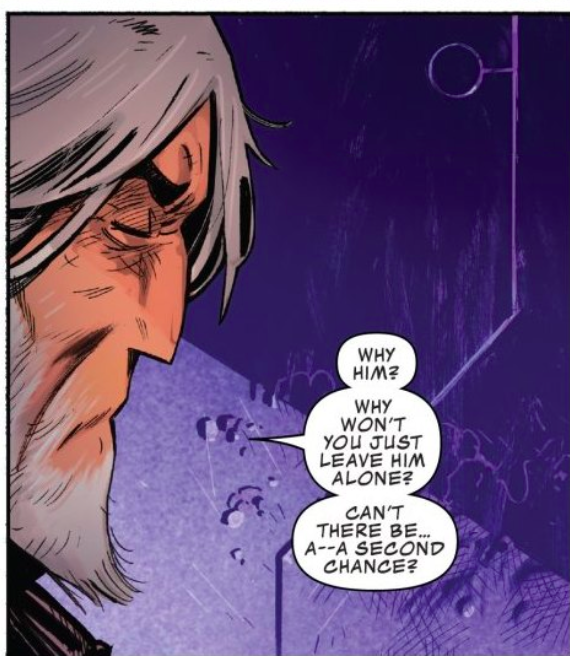 At the end of Cosmic Ghost Rider 5 Frank has that discussion with Death about destiny and second chances. Again, this conversation is about Thanos but can just as easily be applied to Frank himself. Second chances are integral part of The Punisher mythos: Frank’s “second chance at life” is one where he dedicates his life to his crusade against crime. By choosing not to kill baby Thanos and instead raise him, Frank is giving Thanos a second chance at life but he’s also giving himself a second chance at fatherhood.

I think it’s that last part that makes this whole mess sting more than anything for Frank. For once Frank makes a choice that was not about killing a life but by trying to save it, and he fails. He fails as a hero and he fails as a father. And in a display of great cosmic power and emotion, Frank throws the blame on himself.

There’s a lot happening in this sequence. Frank is coming to the realization that of his hubris in trying to reform the Mad Titan, admonishing both Thanos and himself. Dylan Burnett throws a lot of emotional on that flaming skull, with a cosmic tear escaping his “eye” as he feels a sense of betrayal on behalf of his actual children.

I think that the question of Frank’s redemption is irrelevant – I don’t believe that he can be “redeemed” and I don’t think that he believes he can be either. I do think that in the context of Cosmic Ghost Rider he is making heroic choices however. 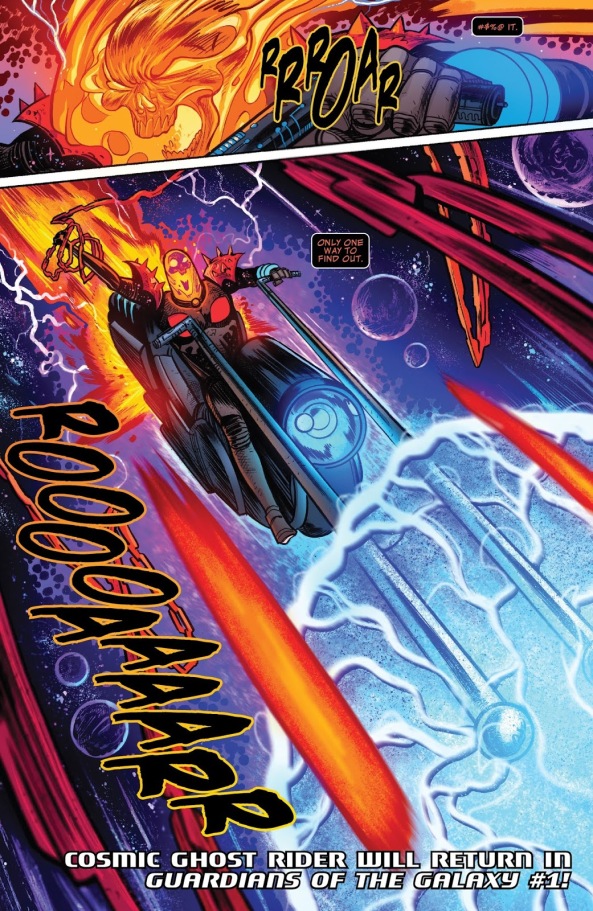 There’s something admirable about Frank’s thick-headed determination to try to fight against destiny. Nearly every character in this series has told him that trying to reform Thanos won’t work, but the crazy old bastard tries anyways. There is heroism in the way that Frank looks at a unwinnable scenario had still tries. Like the man says: “#$%@ it.”