Spencer: I’m a sucker for fight scenes. When I was younger, my top priority for any piece of media I checked out was “lots and lots of fighting,” as my voracious consumption of Dragonball Z in middle and high school can attest to. I still have a soft spot for this kind of action — and I look forward to lots of lovingly, intricately choreographed fight scenes when I finally get to see Captain America: Civil War on Friday — but as I’ve grown older, I’ve come to realize that action without any sort of substance supporting it is just hollow. While the “Final Days of Superman” storyline has plenty of substance to it, little of it makes its way into Batman/Superman 32. This issue has tons of action, but little of it means anything. END_OF_DOCUMENT_TOKEN_TO_BE_REPLACED

Drew: What is a comic book series? That sounds like a simple question, but it’s one of those definitions that falls apart under close scrutiny. Peter Tomasi understands how strange our notion of a series can get, as he piloted Batman and Robin through the better part of a year without Robin. In that case, it wasn’t the cast, but the creative team that allowed us to group those issues as part of Batman and Robin. But if we take that definition of a “series” as something to do with a serialized narrative told by the same person (or team of people), what do we make of “Super Legion,” Tomasi’s new eight-part crossover that cycles through four different titles? Does it function like its own miniseries, or do its constituent issues maintain enough of their series’ identity to keep them distinct? The answer lies somewhere in between, which makes Batman/Superman 31 one of the most fascinating, if troubled, individual issues I’ve read in quite some time. END_OF_DOCUMENT_TOKEN_TO_BE_REPLACED

Michael: Any given issue of Batman/Superman is a coin toss. The relatively young incarnation of this relatively old idea is more of a companion piece to writer Greg Pak’s other Superman series, Action Comics. It’s an exploration of different avenues for Superman while being grounded by Batman as the constant. What happens when both the constant and the variable of this story-telling formula are changed? Is it the same book? 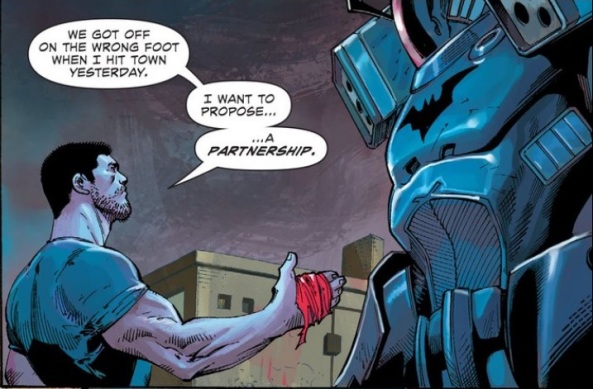 END_OF_DOCUMENT_TOKEN_TO_BE_REPLACED

Drew: Ironic detachment is a dangerous thing in a work of art. It calls our attention to the weaknesses of a story, but it can’t do much to address those weaknesses. In calling our attention to the foibles of a work of art, the artist is intentionally leaving them in, which either means they’re either left there intentionally (maybe just to point them out), or they’re actually unavoidable, in which case, making fun of them is entirely superficial. Either way, it makes the art about itself, which is great if the point of the art is to comment on the limitations of the form, but starts to break down if it needs to make any other points. Unfortunately, Batman/Superman 5 aims for something beyond its postmodern trappings, and falls firmly into this latter category. END_OF_DOCUMENT_TOKEN_TO_BE_REPLACED

Spencer: Doomsday is a hard character to write. Of course he’s a legendary, unstoppable force, but he’s also a personality-less beast with little depth beyond an insatiable desire to destroy Superman. In short, he was a gimmick, but a wildly successful gimmick; considering all of that, I was quite curious going into this issue about what Greg Pak would do with the character. Much to my surprise, Pak decided to write a Doomsday story about how the monster’s legend affects various generations of his victims. It’s a novel approach, but I admit, some unclear or missing parts of the story make it a bit hard for me to figure out what exactly Pak is trying to say. END_OF_DOCUMENT_TOKEN_TO_BE_REPLACED

Mikyzptlk: When I think upon my childhood friends that I am still friends with today, I sometimes wonder how our lives might have differed had we not become friends when we had. I also wonder what would have happened if we had not met until we were much older. I would be much different. They would be much different. Would we even have become friends at all? The third issue of Batman/Superman has me asking those questions as it explores how the World’s Finest heroes of Earth 2 became friends. Word of warning y’all, it’s totes adorbs.

END_OF_DOCUMENT_TOKEN_TO_BE_REPLACED

In September, DC’s entire line is going to be highjacked by the villains of the universe. The creative teams frankenstiened together from DC’s regular stable of writers and artists, but — with a few exceptions — none of titles look like logical continuations of any of the current series. How’s a body supposed to know what they’re supposed to read? That’s where our four-part guide comes in.

DC’s having a bit of a Superman renaissance at the moment. Between the successful — but critically divisive — Man of Steel and the host of new series with a big red S on the cover, it’s starting to be okay to be a Superman fan again. In part two of our guide, we’ll be going over the issues from Action Comics, Superman, Batman / Superman and Earth-2. Be sure to check Part 1 – Batman and Part 3 – Justice Leagues and Teen Titans. END_OF_DOCUMENT_TOKEN_TO_BE_REPLACED

Mikyzptlk: Alternate universe stories are just plain fun. Shows like Star Trek: TNG, Sliders, and most recently, Fringe have all played with the concept of parallel Earths. It’s fun to explore how one change or another can affect the lives of the characters we know and love. By adding or removing variables, writers have a chance to dig into characters in ways they might not normally have the opportunity to do. Sometimes, this exploration is only for the benefit of the audience, and the story is just some kind of “what-if,” other times though, like in Batman/Superman 2, the parallel universe trope is used not only to explore variations, but to further the development of the characters as well. END_OF_DOCUMENT_TOKEN_TO_BE_REPLACED

Drew: Paper or plastic? Beatles or Stones? Smooth or crunchy? We love our false dichotomies, and while Marvel vs. DC may be the most obvious example in the world of comics, Batman vs. Superman is a close second. They’re presented as polar opposites enough to make it feel like a given, but are they really so different? Superman may draw his power from the sun, and Batman may draw his power from the shadows, but move beyond their color palettes and you’ll find that both fight for justice, both refuse to kill, and both have a penchant for wearing their underwear on the outside of their clothes. Of course, if you dig a bit deeper, you’ll find that their reasons differ on a fundamental level, growing out of their profoundly different psyches. It’s those differences, rather than the light/dark dichotomy, that Greg Pak sets to explore in Batman/Superman 1, and the result is a surprisingly fresh take on the pairing. END_OF_DOCUMENT_TOKEN_TO_BE_REPLACED