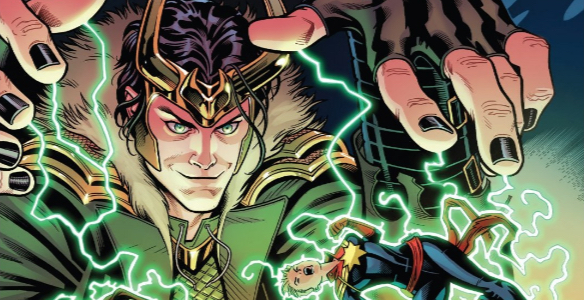 I’ve been reading, collecting, and following weekly American comics for well over a decade now, and I’ve watched not only the industry grow, but my own tastes as well; the type of standard, “heroes beat villain and saves the world” stories that were once exciting have become a bit routine. That’s not to say that there isn’t room for these kind of stories within the industry, but they need a little something special to stand out and really feel worth investing in, and unfortunately, I haven’t found that spark yet in Jason Aaron and Ed McGuinness’ run on Avengers. END_OF_DOCUMENT_TOKEN_TO_BE_REPLACED

Avengers 2 finds writer Jason Aaron and artist Ed McGuinness still trying to explain just what their Avengers book is going to be. Like the premiere issue, Avengers 2 is incredibly chatty, stuffed to the gills with narration, banter, quips, and inner-monologue that try to help explain the presence (and absence) of various Avengers. There’s a delayed gratification aspect at play, and seeing the entire team finally all together (whenever that happens) will no doubt be cathartic, but spending so much ink explaining why this team-up book doesn’t yet have a team is a sometimes frustrating choice. END_OF_DOCUMENT_TOKEN_TO_BE_REPLACED

Taylor: In middle school, my favorite book was a archaeology tome titles Ancient Mysteries. The book is exactly what you would think — a survey of all the unsolved mysteries archaeologists have studied such as how the inhabitants of Easter Island made their statues and the relevancy of the Atlantis story. I was entranced by these mysteries because they suggested a history of Earth that was far bigger and far stranger than anything I had imagined up to that point. This was exciting at the time, and to this day my interest is still piqued by random archaeology articles on the BBC. It’s maybe for this reason that Avengers 1 intrigues me so much. It points to a deep, weird history of Earth I want to know more about. END_OF_DOCUMENT_TOKEN_TO_BE_REPLACED

Wolverine has always been the perfect blend of superpower and persona. On the mutant side, Logan’s body regenerates from virtually any damage he may sustain. On the persona side, Logan is strong-willed and once his mind is set to do something, there’s little that can get in his way. The marriage of Logan’s unflinching resolve and undying body is poetic in the way each side reflects the other. What exactly that makes of the man’s psyche is the topic of discussion in Astonishing X-Men 3. END_OF_DOCUMENT_TOKEN_TO_BE_REPLACED

Spencer: The first couple of times I read through Guardians of the Galaxy 20 I found myself utterly unable to figure out how to approach writing about it. To be honest, I’m still a little flummoxed; there’s plenty of moments within the issue I think are quite well done, but I don’t know if any of them ever coalesce into a cohesive whole. Is this an issue about Nova’s heroic sacrifice, or an issue about how his death has affected the Guardians? Writer Brian Michael Bendis is clearly trying to make it about both, but in the process, I’m not sure he gives either thread the full attention it requires. END_OF_DOCUMENT_TOKEN_TO_BE_REPLACED

Heaven is a place where nothing ever happens.

– “Heaven” by The Talking Heads

Taylor: So sings David Byrne in describing his vision of paradise. Whatever your beliefs or disbeliefs of heaven may be, there’s no denying the power of the imagery the word or thought evokes. For some, it may be a rosy paradise full of angels strumming on harps. For others it may be a state of mind that represents tranquility. And for others still it may mean a bed full of Doritos being fed to you while Arnold Schwarzenegger movies play endlessly on repeat (or is that hell?). But what would heaven look like to a member of the X-Men? A danger room set to beyond-lethal difficulty? A utopia where humans and mutants get along? A place free of the burden of having augmented powers? In Amazing X-Men 1, we get our answer and fans are reintroduced to a member of the X-Men who they have surely been missing.

END_OF_DOCUMENT_TOKEN_TO_BE_REPLACED

Beru: Owen, he can’t stay here forever. Most of his friends have gone. It means so much to him.

Owen: I’ll make it up to him next year, I promise.

Beru: Luke’s just not a farmer, Owen. He has too much of his father in him.

Owen: That’s what I’m afraid of.

Patrick: It’s not uncommon for our space heroes to have impossible family legacies to live up to. Luke Skywalker would come to define himself by how he chose to respond his father’s every action. Darth Vader isn’t evil — he’s over zealous, he gets in over his head and uses his considerable powers to get what he wants. He’s an old man in need of redemption, and Luke’s the only person to see that — because they’re so much alike. This conversation between Luke’s adopted aunt and uncle holds the perfect amount of mystery and specificity to tease some meaningful depth about the character. In Nova, Sam’s father’s reputation looms similarly large, but no one has anything nearly so interesting to say about him. END_OF_DOCUMENT_TOKEN_TO_BE_REPLACED

Shelby: In the pilot episode of Firefly, we meet the ship’s pilot Wash as he is playing with some toy dinosaurs. As the T-Rex and his veggie-saurus friend survey their new home, the Rex turns on his friend, prompting the delightful line, “Curse your sudden, but inevitable betrayal!” In last month’s look at issues 1-3 of Nova, Patrick and Drew discussed Jeff Loeb’s penchant for cliches; they assumed Young Sam would be betrayed by Rocket and Gamorra, but because it seemed so obvious, they also assumed it was a fake-out. They weren’t totally wrong; Loeb gives us our inevitable betrayal this issue, but it comes from a completely unexpected direction.  END_OF_DOCUMENT_TOKEN_TO_BE_REPLACED

Drew: Cliche is a complicated subject in genre fiction. We tend to characterize predictability as bad, but it’s only by setting up expectations that writers are able to thwart them. Moreover, those tropes may be the very thing that draws us to those genres in the first place — we want the hero to beat the villain, get the girl, and ride off into the sunset. As a veteran writer conversant in a number of genres, Jeff Loeb understands the power of those tropes, mixing them potently in his take on Nova. END_OF_DOCUMENT_TOKEN_TO_BE_REPLACED