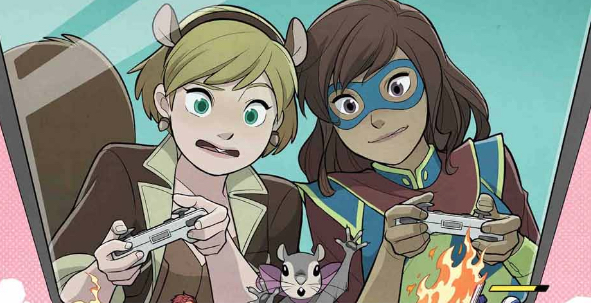 On paper, the team-up of Squirrel Girl and Ms. Marvel makes too much sense for it not to happen. Both heroes are young protagonists. Both are second tier Marvel heroes next to the headliner Avengers. And perhaps most importantly, both of their series are strikingly modern and fun. But just because a team-up makes sense in theory doesn’t mean it will really work in practice. Artistic differences and such often derail the best laid team-up issues. Baring this in mind, does Marvel Rising: Squirrel Girl/Ms. Marvel 1 strike gold or strike out? END_OF_DOCUMENT_TOKEN_TO_BE_REPLACED

Ryan M: We all have things that we would never want the world to know about us. I started to type an example about me here and then deleted it, so there’s your proof. There is a reason that certain things are kept private. In a world where a malevolent person could access so much of your life through technology and persistence, it feels even more important to keep some things sacred. Ms. Marvel 15 deals with the psychological ramifications of a secret getting out as well. END_OF_DOCUMENT_TOKEN_TO_BE_REPLACED

Today, Taylor and Spencer are discussing Ms. Marvel 18, originally released September 9th, 2015. This issue is a Secret Wars tie-in. For more Secret Wars coverage from the week, check back Tuesday for our Secret Wars Round-Up.

Taylor: The old axiom says there are five stages of grief: denial, anger, bargaining, depression, and acceptance. While I have my doubts that every person experiences grief in the exact same way as this, I do believe that most people go through something akin to this before arriving at the final stage of acceptance. When something truly traumatic happens it takes awhile for our brains to shift to the new reality of things. However, I think given time we all come to accept whatever bad thing it is that’s happened to us. Ms. Marvel 18 delves into this last stage of coping with grief and shows us that for everyone who undergoes it, it looks a little different.

END_OF_DOCUMENT_TOKEN_TO_BE_REPLACED

Spencer: Being a teenager comes with a skewed sense of priorities. Every setback you face feels like the end of the world, even something as simple as failing a test or embarrassing yourself in front of your crush. As the superheroic Ms. Marvel, Kamala Kahn’s problems are often much more severe than the typical teenager’s, but even she sometimes needs a lesson in priorities — it’s just a shame that Kamala’s reminder takes the shape of the literal end of the world. If that sounds depressing, don’t worry — despite the heavier subject matter, G. Willow Wilson and Adrian Alphona never let Ms. Marvel 16 feel gloomy or depressing, instead focusing on the same mix of humor, heart, and adventure that’s made this title such a delight from the very start. END_OF_DOCUMENT_TOKEN_TO_BE_REPLACED