By Drew Baumgartner and Patrick Ehlers 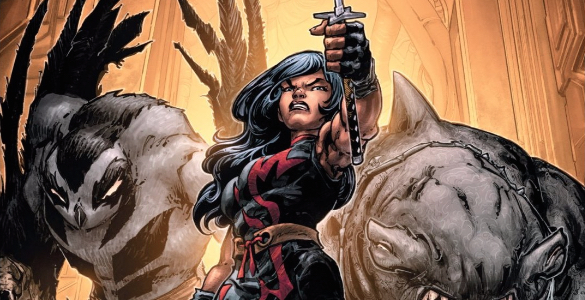 Drew: The Teenage Mutant Ninja Turtles have always been the perfect outcasts in a medium made for outcasts. Well, saying that comics were “made” for outcasts isn’t entirely accurate, but it certainly had become a medium for outcasts — at least in the US — by the time the turtles were invented in the 1980s. We don’t really need to get into the causality of why comics fandom was perceived as a weird thing — the point is that it was. And in the age before the internet, someone with a “weird” hobby or enthusiasm for some obscure piece of pop culture might not know anyone else like themselves. While the rest of the world could connect over their religion, political party, or even local sports team, the average comics reader in 1984 might not have had anyone they knew who shared their interest. I don’t bring this up to pity the lot of the poor comics fan — heaven knows plenty of people were more isolated and actively persecuted — just to say that themes of not fitting in have always been an essential part of the TMNT makeup. This is a point that Erik Burnham and Sophie Campbell clearly understand, as their Teenage Mutant Ninja Turtles Universe finds several characters seeking their place in the world. END_OF_DOCUMENT_TOKEN_TO_BE_REPLACED

In real life, people who exhibit single-mindedness can be a bore. In fiction, that same behavior can work as a backdrop for more entertaining action. Erik Burnham and Sophie Campbell present two storylines in Teenage Mutant Ninja Turtles Universe 14, each with a woman at the center who provides the story’s drive if not its color. This is not a negative thing, Karai and Natsu both demonstrate a sense of purpose and commitment that pushes the story forward while also challenging the world around them to make room. END_OF_DOCUMENT_TOKEN_TO_BE_REPLACED

Patrick: There’s one question that keeps rolling through my head in reading FCBD issues: who is this for? For retailers, the purpose of the event is self-evident. Stores get throw fun little parties and get some extra bodies in through those doors. And comic fans get to have their own little celebrations as well. But when I’m back in my apartment and it’s just me and books, I can’t help but wonder about everyone’s experience with their new free comics. Did the twelve year-old with Batman on his shirt get a kick of Divergence 1 because it was the “robo-Batman one?” (Those are the comic store employee’s words, not the kid’s). Were any new life-time fans born today? Or were some potential fans alienated? And what about those of us with extensive pulls? Did we get something out of this? Who are these comics for? END_OF_DOCUMENT_TOKEN_TO_BE_REPLACED

Drew: By the time I was watching the Teenage Mutant Ninja Turtles cartoon, it was already airing in syndication 5 days a week. That was awesome for the part of me that wanted to see sweet ninja turtle action on a regular basis, but decidedly less awesome for whatever part of me was supposed to learn patience. I could wait exactly one day between episodes, but no more. Indeed, I didn’t even have patience for scenes on the show that didn’t feature the turtles (to my credit, they almost never ordered pizza at the technodrome), so the finer points of plotting were often lost on me. Intrepid youtubers have aimed to rectify my ignorance, compiling all of Shredder’s scenes with Krang into bite-sized videos, but life has offered a much more fulfilling second chance in the form of Teenage Mutant Ninja Turtles 37, which focuses exclusively on Shredder and Krang’s first (er, second) meeting. END_OF_DOCUMENT_TOKEN_TO_BE_REPLACED

Patrick: IDW’s Teenage Mutant Ninja Turtles has been something of a revelation for me. As an adult, I have been delighted to see the teenage-ness of these characters explored for the universal tragedy we all know it to be — isolation, anger, confusion. That’s hard shit that we all went through. These last couple issues at Northampton have allowed the creative team to meditate on those feelings against the quiet backdrop of some uneasy healing. But damn it all, they’re also ninjas. That means that part of their experience, part of the way they process their emotions, is through violence. Issue 32 trades in its quiet moments for explosive action beats, and while it’s harder to relate to that kind of resolution, the fact that it works so well for the Turtles reminds the readers that, for all we have in common with dorky teenagers, they are warriors and their salvation comes from making war.

END_OF_DOCUMENT_TOKEN_TO_BE_REPLACED

Patrick: How do we heal? Whether the wounds are physical or emotional, there’s almost never a good answer to that question — certainly never an easy answer. When I look back on the biggest hurts I’ve recovered from, I know that I did heal, but I couldn’t for the life of me tell you how. I remember at the time feeling like there would be no relief — from a broken heart, or a broken bone. I was always afraid that I’d never get better, that I would only ever forget what “better” feels like and accept broken as my new emotional base. It’s unsatisfying and it’s messy and it’s prone to regression. The biggest fuck of it all is that there are no shortcuts. All of the Turtles (and their friends) are in need of healing, and it’s been such a slow beautiful process, I can’t help but feel unnerved when April introduces a magic healing goo. Fortunately, the tension between the quick fix and honest healing is right at the front of yet another fantastic issue of TMNT. END_OF_DOCUMENT_TOKEN_TO_BE_REPLACED