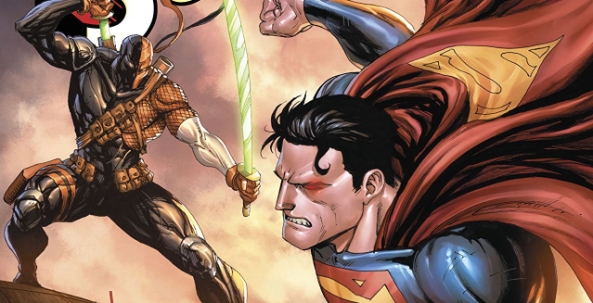 Superman’s moral code is not complex, and that’s a great thing about him as far as I’m concerned. Superman does good simply because it’s the right thing to do, and he never kills — Man of Steel nonwithstanding, he always finds a way to win without sacrificing his morals, because that’s just who Superman is. Deathstroke’s morality is far more murky, and that leads to some interesting juxtaposition in Superman 32. END_OF_DOCUMENT_TOKEN_TO_BE_REPLACED

Michael: There’ve been numerous attempts at a Deathstroke solo series since the dawn of The New 52 – none of which I have read, but also none of which have been received very well. Overall I’d say that I’m enjoying the maiden voyage of Christopher Priest and Carlo Pagulayan’s Deathstroke, probably because it’s broaching the questions of “who is Slade Wilson?” and consequently “why do we find him so fascinating?” END_OF_DOCUMENT_TOKEN_TO_BE_REPLACED

Taylor: Teams are in. Everywhere we look in today’s society, teamwork is emphasized as being one of the most important skills to develop. When you apply for a job, employers want to know how well you work with others and what your contribution to the team will be. Sports stars are lauded for the ability to swallow their ego and function as a member of a team that functions as one unit. And speaking of teams, we can’t ignore the recent Avengers movie which was one of biggest team love-fests to ever grace the silver screen. Hell, even Batman, the quintessential solitary dark night, learned to work on a team in Christopher Nolan’s latest film. Indeed, it seems that the way of the lone wolf — your Clint Eastwoods and wandering Ronin — is a thing of the past. Given this favorable disposition towards the idea of teamwork, it seems like DC’s Team 7 would be an instant hit. But as the second issue demonstrates both in its plot and it its execution, sometimes getting a team to work together effectively is harder than it would first appear.

END_OF_DOCUMENT_TOKEN_TO_BE_REPLACED

Mik: Hey all, Mikyzptlk here, but you can call me Mik (with a long “I”) if, you know, you’re into the whole brevity thing. With that out of the way, let’s get cracking. Going into Team 7, I know next to nothing about this team. I know that it was originally a Wildstorm book but that’s about it. Except for The Authority, I tended to stay away from most of what Wildstorm had to offer. That being the case, I normally wouldn’t be interested in this book but DC has done a few clever things to get me interested. First off, they’ve added a few familiar faces from the DCU into the mix and, more importantly, they’ve set the book in the early (and mostly shrouded) years of the The New 52. ZERO Month did a good job of filling in some of the details of the first 5 years of the new DCU but there are still A LOT of gaps to close.
END_OF_DOCUMENT_TOKEN_TO_BE_REPLACED

Shelby: My first exposure to the man, the myth, the legend that is Rob Liefeld was when he took over Deathstroke from Kyle Higgins at issue 9. Liefeld is the most polarizing writer/artist I have ever encountered. Most of the comic fanbase despises his work, for a number of very valid reasons. He seemingly has no idea what the human body looks like, especially the female body. He cannot draw feet, to the point that his panels are often cropped so that the feet aren’t even pictured. He has no consistency; it is not unusual to see multiple haircuts on a character in one issue, hell, on one page. His writing is sophomoric at best. And yet, the fans of his work are just as rabid in their adoration as the rest of us are in our abhorrence. I have a personal beef with Liefeld, because I was really enjoying this title before he took over and sucked the good out of it. I’m going to try to maintain a professional, objective voice so we can just get through this, but I make no promises.

END_OF_DOCUMENT_TOKEN_TO_BE_REPLACED

Patrick: There comes a point in every heist movie where they assemble the team. Usually it’s done in a montage, featuring short (but implicitly characteristic) misadventures of various tech experts, combat experts, stealth experts — any kind of expert, really. And at the end of each little vigniette, George Clooney shows up and offers them a job.  Oh, and the whole this is scored by a poppy drum and bass loop with occasional horn accents. These sequences are always about as much fun as the heist itself and doesn’t suffer from the complexity and double-back-false logic applied to the climax of most of these stories. Team 7‘s zero issue gets us off to a breezy start, with enough action, humor and built-in mystery to prepare its audience for what promises to be dazzling run.

END_OF_DOCUMENT_TOKEN_TO_BE_REPLACED

Patrick: Writer and artist Rob Liefeld is an interesting dude. He’s been a huge figure in american comic books since the 1990s, was one of the founding members of Image Comics, and currently writes and/or draws more comic series than the average person is reading. He’s a prodigious talent, and even when he’s mired by controversies about misogyny, late work or even plagiarism, the man sells a ton of comic books. There’s a legion of critics that absolutely loathe his contributions to the medium, but the legion of fans that support his efforts far outweigh the nay-sayers. For all the content the guy produces, he somehow manages to keep up a very active, incredibly aggressive public persona (the man’s twitter appetite is insatiable). He’s boastful, and likes to remind critics that no matter what they say, he’s always going to be successful. Besides, Liefeld frequently asserts, he’s not writing for the critics he’s writing for the fans. So if the artist is so interesting, why is his art so boring?

END_OF_DOCUMENT_TOKEN_TO_BE_REPLACED

Peter: With the release of issue 9, Deathstroke gets both a new writer and artist, who turns out, is the same person. Rob Liefeld takes the reins of the Terminator and sends him on a new adventure. However, I feel that DC should have gone ahead and called this issue #1, since, well, that’s pretty much exactly what it is.

END_OF_DOCUMENT_TOKEN_TO_BE_REPLACED

Shelby: Of all the titles of the New 52 I’m reading, I think the one that surprised me the most was Deathstroke. I started reading it at the recommendation of my comic shop; all I expected was a story with some hardcore, kickass action. What I got was an introduction to a character I like a lot, not only for his total badassedness, but also for the depth Kyle Higgins brought to the character. Peter and I had the distinct pleasure of meeting Kyle at C2E2 this weekend, and we all shed a single tear at his leaving Deathstroke.

END_OF_DOCUMENT_TOKEN_TO_BE_REPLACED

Peter: Sometimes I would kind of like to see comic book story lines not follow the expected progression. Most of the time, after about the first half of a story arc, you can guess what is about to happen; maybe not the specifics, but you can pretty much figure it out. That’s what I thought was going to happen with Deathstroke. I figured, “How hard could it be?” he’s an assassin. He kills people. He gets paid. Sometimes he takes on superheroes…for money, or personal benefit. So really I thought I had this all figured out, and then I read Deathstroke 7. As it turns out, I had nothing figured out, and you know what? I am extremely okay with that. END_OF_DOCUMENT_TOKEN_TO_BE_REPLACED