“When I woke up, I went on what the movie advertisements refer to as a roaring rampage of revenge. I roared. I rampaged. And I got bloody satisfaction.”

I tend to struggle with revenge fantasies. The objective of the protagonist is too prescribed for me, as though the sentiment “I want the people who made me suffer to feel what I feel” is a universal impulse. That is, of course, part of the genius of Kill Bill: the revenge fantasy is challenged the second Beatrix Kiddo sees the life she’s sworn to ruin. It’s a twist on the formula, just like Nick Spencer and Steve Lieber’s The Fix 12. The motivation remains the same, but our hero’s efficacy is the variable. Roy’s complete inability to get revenge for Mac’s death makes this issue a borderline genre spoof, and it’s just so perfect. END_OF_DOCUMENT_TOKEN_TO_BE_REPLACED 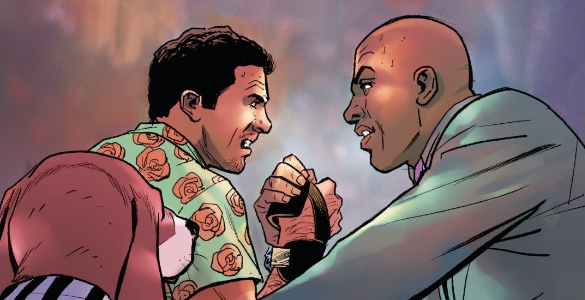 I know this is hypocritical immediately following a spoiler alert, but I don’t believe in spoilers. They’re something I respect because I know other people believe in them (like God), but the threat of a spoiler doesn’t change the articles I will read or the conversations I’ll have (huh, also like God). If a movie or tv show or book is so slight as to have the experience of it ruined by simply knowing what’s going to happen, it probably wasn’t worth experiencing in the first place. The Fix 11 starts with a seismic shift, fully acknowledging the trope that Nick Spencer and Steve Lieber are subverting for shock value. “Surprise” reads the narration box. But the surprise isn’t the point, the fall-out from the surprise is. END_OF_DOCUMENT_TOKEN_TO_BE_REPLACED 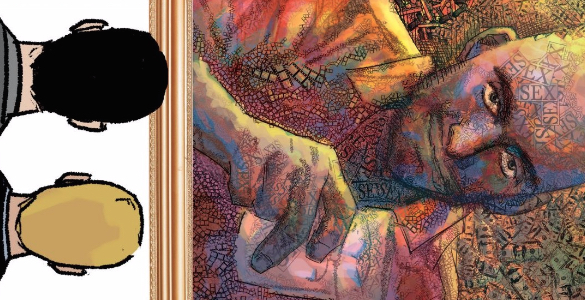 You either die a hero, or you live long enough to see yourself become the villain.

Drew: If that quote doesn’t feel like it fits this issue, it’s because it doesn’t. Where The Dark Knight explores the ideas of good, evil, and the moral relativism that exists in between, The Fix is gleefully amoral, concerned less with good and bad as it is with whatever its protagonists can get away with. Which is to say, a quote about heroes and villains doesn’t make a whole lot of sense in the world of The Fix. But I wonder if we strip away the morality from that quote, if we might get something a bit more universal (if still deeply pessimistic): you either die happy, or you live long enough to see yourself become miserable. The ordering of those outcomes betrays a cynical worldview that The Dark Knight (or at least Harvey Dent) shares with The Fix, one that presumes things are inclined to get worse. Of course, while The Dark Knight spun that cynicism into tragedy, The Fix funnels it into dark humor, making any successes Roy or Mac may enjoy are but haughty spirits before the inevitable fall. END_OF_DOCUMENT_TOKEN_TO_BE_REPLACED

By Drew Baumgartner and Ryan Desaulniers

Some are born great, some achieve greatness, and some have greatness thrust upon ’em.

Drew: This quote often comes up when discussing historical figures, but to my eye, it’s really all about the narratives we build around people. That is, this describes fictional heroes — from “chosen ones” destined for greatness to utterly reluctant nobodies that rise to the occasion — stories so familiar to us, we can’t help but project them on the world around us. But, like, what does it mean to be “born great,” and how do we distinguish that from someone having greatness thrust upon them? Those kinds of distinctions might make sense in stories where deities and magic put concepts like destiny in play, but the real world is much messier than that. Such is the case with Casey Solomon, whose greatness is anticipated by Forever Carlyle. Is her greatness inborn, or is it something she only achieved in order to live up to expectations? END_OF_DOCUMENT_TOKEN_TO_BE_REPLACED

Today, Drew and Ryan D. are discussing The Fix 9, originally released May 10th, 2017. As always, this article contains SPOILERS.

Drew: In this age of heavily serialized television, the humble pre-cold-open-recap has become a matter of course. It can be darn useful for keeping threads straight, especially as they may feature elements introduced months or even years ago. Of course, that very feature — the inclusion of some long-forgotten detail — can often betray the events of the episode, broadcasting exactly what threads will be addressed. It’s a catch-22 that may be even more pronounced in comics, where a monthly release schedule can equate to more forgotten details between instalments, leading some series to offer virtually comprehensive recaps on their title pages. With The Fix, Nick Spencer and Steve Lieber have developed an in-narrative recap style that manages to avoid the dangers of giving the game away by simply limiting it to the perspective of their characters. END_OF_DOCUMENT_TOKEN_TO_BE_REPLACED

Without artists, all of your favorite characters, scenes, costumes, and locations would just be words on a page. In short, they’re the ones that make comics comics. That’s a lot of responsibility, yet the best artists manage to juggle all of those tasks and inject some meaningful art and style into the proceedings. Whether its a subtle expression or a jaw-dropping action sequence, our favorite artists add the requisite magic to make their worlds and characters real. These are our top 10 artists of 2016.
END_OF_DOCUMENT_TOKEN_TO_BE_REPLACED

Episodic storytelling is the name of the game in monthly comics. Month- or even multi-year-long arcs are fine, but a series lives and dies by its individual chapters. From self-contained one-offs to issues that recontextualize their respective series, this year had a ton of great issues. Whittling down those issues to a list was no easy task (and we look forward to hearing how your lists differ in the comments), but we would gladly recommend any (and all) of these issues without hesitation. These are our top 10 issues of 2016. END_OF_DOCUMENT_TOKEN_TO_BE_REPLACED

You know you shouldn’t judge a book by its cover, but that doesn’t mean you can’t judge the cover on its own merit. Some covers are so excellent that they pack all the drama, excitement and emotion of the whole issue into one succinct image. Sometimes they end up being their own surreal experience. And other times, we’re just exciting to see our favorite heroes kicking ass one more time. These are our top 10 covers of 2016. END_OF_DOCUMENT_TOKEN_TO_BE_REPLACED

I originally pitched [Breaking Bad] to the studio with one line. I told them: “This is a story about a man who transforms himself from Mr. Chips into Scarface.”

Drew: Vince Gilligan’s elevator pitch for Breaking Bad might be one of the most well-known loglines in modern television — my dad knows it, if that’s any indication. I suspect people are attracted to the simplicity of Gilligan’s analogies; he calls on two films to paint before and after portraits of Walter White. For me, though, the very fact that he used two film characters to chart the endpoints of Walter’s evolution speaks to the differences between television and film — or, rather, the specific narrative capabilities of serialized stories. Where Walter White’s character is fundamentally one in transition between two points, film characters like Mr. Chips and Scarface are better understood as points.

To me, this is simply down to the matter of time. We don’t have enough time with film characters to form strong enough senses of who they are for all but the most obvious changes to even register. Any subtler changes might just be seen as inconsistency while we’re still forming our first impressions. In serialized narratives, though, we have much more time to develop a clear sense of who a character is — what they want, what they fear, what they will or won’t do — so can appreciate smaller, subtler changes. In a series like Breaking Bad, those changes slowly accumulate, building to drastic transformations that somehow never feel drastic at the moment. In a series like The Fix, those changes can provide a much more nuanced portrait when a character is pushed to the limit. END_OF_DOCUMENT_TOKEN_TO_BE_REPLACED

Spencer: The stars of The Fix are not good people; Roy, especially, has been portrayed as completely immoral and self-serving. There’s one more aspect of his personality, though, that we shouldn’t forget, one which Nick Spencer and Steve Lieber thoroughly remind us of in The Fix 5: he’s pretty bad at being a criminal, too. Roy’s ability to break the law and get away with it has more to do with the corrupt institution he serves than his own skills, meaning he’ll squander any chance he has to progress as a criminal. For the citizens of The Fix‘s L.A., that’s probably a very good thing. END_OF_DOCUMENT_TOKEN_TO_BE_REPLACED