Back when the Future Foundation rode off into the sunset at the end of Secret Wars, ready to recreate and explore the multiverse, many fans (myself included) saw it as the perfect farewell to the characters. This leaves Dan Slott and Sara Pichelli with the unenviable task of bringing this “ending” to an end, of justifying more adventures for characters who had already received their happily ever after. Interestingly, Slott and Pichelli do so by demonizing the very idea of “endings,” by making “the end” the very villain that brings the Fantastic Four back together. END_OF_DOCUMENT_TOKEN_TO_BE_REPLACED

But this epilogue is more than just a cute way to sign off with joke. By ending the issue with an explicit acknowledgement that “they’re not even back yet”, Slott and Young are doubling down on the idea that the absence of the Four itself is a phenomenon worth exploring. END_OF_DOCUMENT_TOKEN_TO_BE_REPLACED 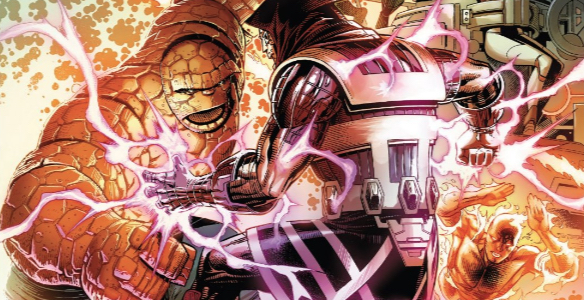 Taylor: Sometimes I’ll come home after work and my wife will ask me how my day was. Usually, I have something interesting to tell her, but occasionally there simply isn’t anything all that remarkable to say. In these cases, my response to her query is that is was “just a day.” See, the thing is, if you do anything enough times it’s bound to become rote every now and then. This same idea certainly holds true with monthly comics, with most series producing “just an issue” that isn’t all that remarkable. Such is the case with Marvel Two-In-One 6, which notable only for how generic it feels.

END_OF_DOCUMENT_TOKEN_TO_BE_REPLACED

Earlier this month it was announced that the Fantastic Four would be returning to comics. Many assumed that their absence from the pages of Marvel monthlies was due to the fact that Fox owns their movie rights. Disney, not wanting to promote movies from which they wouldn’t profit, phased them out of their comic pages, or so the theory goes. Whether this is true or not may never be known, but now that the Fantastic Four are soon to return, it’s interesting to consider how exactly that will happen. However, if Marvel Two-In-One 5 is any indication, the Fantastic Four may already have reunited. END_OF_DOCUMENT_TOKEN_TO_BE_REPLACED

Patrick: Does writer Chip Zdarsky leverage humor to find pathos, or does he exploit genuine emotion for comedy? It’s almost impossible to tell. Zdarsky often rides the line between celebrating the absurdity and celebrating the sincerity of his characters and his stories. Marvel Two-In-One somehow achieves both simultaneously, giving the reader a sad, almost Venture Brothersian look into the loneliness and ennui of the last remaining members of the Fantastic Four, while never letting go of the inherent weirdness of these characters. It’s a stupendous feat of writing, emboldened by Jim Cheung’s reverent artwork. END_OF_DOCUMENT_TOKEN_TO_BE_REPLACED

Patrick: I don’t like the way James Robinson writes dialogue. Don’t like it. He invents unnecessarily awkward contractions; his characters use cliché superhero rhetoric; there are frequent problems with subject-verb agreement; and he’ll mix up countable and uncountable objects (using words like “fewer” and “less” incorrectly). I can accept some of these “mistakes” as affectations of Robinson’s characters: lord knows Ben Grimm and Johnny Storm aren’t going to edit the words that come out of their mouths. But dialogue is like 5% of a comic, right? As long as the art and incident are compelling, a few glaringly stupid sentences shouldn’t bother me, right? RIGHT!? END_OF_DOCUMENT_TOKEN_TO_BE_REPLACED

Ethan: With the arrival of FF 16 Scott Lang’s campaign to end Doom is itself at an end. Even though Doom was the cause of the crusade, it’s always been more about Scott — this finale is no different. As Scott confronts the mortal enemy of the Fantastic Four and the man who killed his daughter, there’s never going to be a better time to prove who or what the latest incarnation of Ant-Man has become. Unsurprisingly, Matt Fraction and Lee Allred do not disappoint.

END_OF_DOCUMENT_TOKEN_TO_BE_REPLACED

Today, Drew are Shelby are discussing Age of Ultron 10, originally released June 19th, 2013. This issue is part of the Age of Ultron crossover event. Click here for complete AU coverage.

Drew: Age of Ultron 9 found Taylor asking “What is time?” It’s something so central to our perception of the world, yet something we barely understand. Issue 10 continues the trend of focusing on subjects at the edge of our scientific understanding, this time taking up the question “What is reality?” What really are these things we believe to be true? History, as they say, is written by the victors (and re-written by whoever beats them, and so on), suggesting that “reality” might be a bit more subjective than we like to think. But what if the victors could actually alter history, not just our retellings of it? What if reality was objectively malleable? That’s kind of the question this series has been asking all along, but its conclusion puts a finer point on it, making the very fabric of Marvel’s “reality” the focus of this issue. END_OF_DOCUMENT_TOKEN_TO_BE_REPLACED

Today, Taylor are Patrick are discussing Age of Ultron 9, originally released June 5th, 2013. This issue is part of the Age of Ultron crossover event. Click here for complete AU coverage.

Taylor: What is time? This is perhaps one of the most fundamental questions to human existence, and as such, it has been discussed by mankind since time immemorial.  While philosophers and physicists debate about what exactly time is (it’s a question that still rages today), science fiction and pop culture have popularized the question by using it in a countless number of plots and stories. So none of us should be surprised that a comic book entitled the Age of Ultron (my emphasis) would come to center its plot on time travel and its consequences. Indeed, with time travel we have seen a proliferation of ages in this event increase exponentially, the consequence of which has been the raising of an eyebrow both for better and for worse. Yet while the plot of Ultron isn’t always all that original, issue nine raises the question of what exactly time is and what the consequences of traveling through it could be.

END_OF_DOCUMENT_TOKEN_TO_BE_REPLACED

Drew: I love mysteries. Not just detective stories — I love even the smallest mysteries that happen in a narrative. Who is that? What is their relationship to the other characters? I find it satisfying when those little mysteries resolve. My girlfriend, on the other hand, has what could be fairly described as anxiety over those little mysteries — she’s always convinced she’s somehow missed the explanation for what’s going on. I think, when you get down to it, the difference is a matter of faith in the storytelling — it’s unclear because it’s supposed to be unclear. That faith flies out the window when you’re jumping into the middle of a decades-long serialized universe, where I very legitimately might have missed the explanation for what’s going on, giving me the very same anxiety I usually tease my girlfriend over. Usually, conscientious editors keep the memories of those titles fairly myopic, providing notes for anything that took place over a few issues ago, but Fantastic Four has been so historically minded as to shake my faith in Matt Fraction to explain everything to me. END_OF_DOCUMENT_TOKEN_TO_BE_REPLACED