Peter: Tony Daniel has a great history with DC Comics. He has written and/or drawn some great books. In fact, he drew one of my favorite books, The Flash: Fastest Man Alive #13. His art couples with a great story, and unfortunately, results with the death of Bart Allen. In his new run of Detective Comics, Daniel does a great job with the art, hands down, giving it that noir, shadow-y feel that I would expect in a detective story. However, Daniel is still leaving something to be desired from a story point of view. I have enjoyed some of his previous writing, such as Battle for the Cowl, or even Detective Comics #1, but as his story progresses and comes to a close in the second story arc, I’m still dazed and confused as to what is going on and why should I care.

This issue of Detective picks up where the last one left off, in the Iceberg Casino, with the Penguin, and his Cadre of Wierdos. During this, Jill Hampton and Snakeskin, both newcomers, were attempting to rob the casino, without George Clooney and Brad Pitt. The Penguin recently took in a large amount of money belonging to the aforementioned Wierdos: a group of second rate supervillians. Jill’s sister, Charlotte, a reporter and current love interest of Bruce Wayne, is trying to get the scoop on the inner-workings on the Penguin’s casino empire. At the end of issue 6, Charlotte is seemingly killed in the explosions resulting from the casino heist. At the beginning of this issue, Batman rescues the bleeding Charlotte and drops her off with Alfred. He then returns to the casino and, in 2 pages, beats up all of Penguins small-time supervillains. Snakeskin, in melty-Clayface-face tries to kill the Penguin, only to have his gun backfire on him and kill him. Batman then confronts the Penguin – again in 2 pages – they fight. Then Jill fights Batman. Batman escapes the exploding casino, Penguin gets knocked out and Jill gets arrested. At the end of the issue Jill is talking with potential lawyers, and after going through a couple, one rips off his face (Snakeskin?), and gives his regards from the Penguin.

So this issue ends the ‘second’ story arc of Detective Comics Volume 2. I say ‘second’ because I was doing some reading online, and apparently this is end of the first arc, which I thought ended after the Dollmaker went away. Well I’m confused on that. There are some connections between the two, but they are fairly separate. Also, my confusion with what exactly is going on half the time is probably not helping. Daniel started out issue 1 really well. I really enjoyed the story about chasing the Joker and such. I also enjoyed a lot of the mystery/noir element with the Dollmaker/Hannibal Lecter arc. The story has since gone spiraling downhill, as Daniel tries to include more angles and characters. As I have said before, I think that he could do a lot better if he consolidated his story to fewer points of view, and worked with a more finite, focused direction.

Especially during this issue, one of the things that I was most taken aback by, in terms of story, was the role of Alfred Pennyworth. While I have always understood that Alfred, as Bruce’s butler and chauffeur, might be involved in delivering Bruce to a Batman mission, i.e. driving Bruce to the event at the casino, it seems really weird that he would hang around, and receive the wounded Charlotte from Batman. It is not conducive to Bruce’s cover. If Alfred is was constantly spotted around major Batman incidents, or constantly showing up at hospitals with wounded, a smart reporter, like Charlotte or Vicky Vale might get suspicious, and start to put the pieces together. While Alfred does play a major role in Bruce’s crime fighting career, the one portrayed here seems almost too involved. 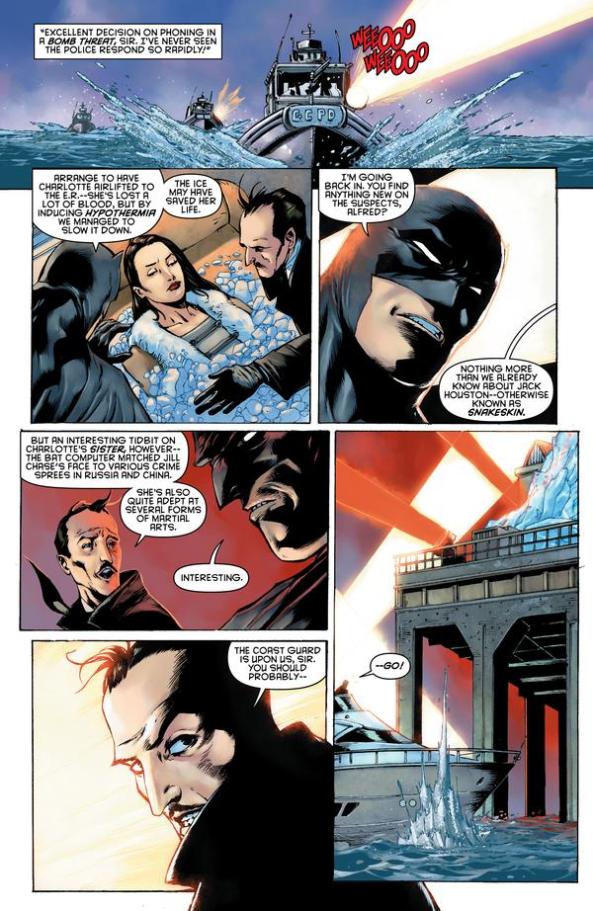 I will say it again, I love Daniel’s art. He has good use of shadowing that is befitting of a detective style book. But the story is matching as well as it could. The book needs a little more focused direction, and should stick to the viewpoints of, I would say maximum three characters, Batman, James Gordon, and the villain. That could be a great book. I really enjoyed the set up from issue 1 with the Joker, and if writing like that would continue, I would get more into this book. Perhaps if DC considered a co-writer, like they have done with Daniel’s other book, Savage Hawkman, that could drive in the right direction. We shall see. I have all the hopes for Daniel and Detective Comics, I just would like to not have to wait too much longer.

Patrick: I kind of hate this series. The plotting is bad, the characters are ridiculous, the dialogue is awful. The story is positively tone-deaf, swinging wildly between ultra-violent and campy-bullshit. The character designs are stupid and there’s no acting going on here. I know our goal on this website is to create a space where we can trade thoughts and ideas about comics, but JESUS CHRIST, I have almost nothing of value to say about this issue.  Well, here goes: I’m going to start stabbing at the darkness hoping to strike a vein of insight.

Let’s talk about The Penguin. Wah wah! It’s like Daniel stripped the character down to his cheesy-ass essentials and then… uh… jeez; did nothing, I guess. Penguin quacks, he runs a floating ice-berg themed casino, he fights with an umbrella gun. I’m not sure I’ve ever seen a really compelling take on the Penguin character – but usually writers attempt to inject some kind of personality or psychology into the character. NOT THE CASE HERE. Monocle, top hat, long pointy noise – this is what’s passing for characterization in this issue.

And I get that the Cadre of Weirdos is supposed to be full of second-rate villains, but these guys are clearly super-powerful magical creatures. Check out those two dudes with Oswald above – that glowing blue guy is named “Combustible.” He’s a walking nuclear reaction – you know, like Captain Atom – but Detective Comics has decided he’s an impotent villain, so it must be the case. Or how about the red fish-bowl-headed-guy? These are comic book villains at their stereotypical worst. I’m embarrassed to be reading these characters and the only joy I’m getting out of writing about them is that I can keep a vain sarcastic distance from them.

Peter, you’re totally right to point out that action-Alfred is wildly out of place in this story. And the problem of crass, cocky Batman persists. I think all of his previous douchebaggery came back ten-fold in this one issue. He can’t talk to anyone without bragging about how much better he is at kicking ass than they are. Watch the way he taunts these villains (who he is quick to point out are literally no threat to him) because he knows there are explosives planted all around the room (also, not totally sure how Batman knows this…)

I think you’re experiencing the same thing as me, but I don’t really know who Snakeskin is or (as you so elegantly put it) why I should care. If it wasn’t for the promise of Night of Owls back-ups in the months to come, I’d drop this title in a heartbeat. Your suggestions for how to focus this series and give it some value are all totally solid. For a title that calls itself “Detective Comics” there’s basically no detective work at play here. It’s basically just Batman’s Action Comics. (Fun Side Note: Drew and I also hated Action Comics.) With so many Bat-books out there, I’d really like to see this one locked more firmly on the Batman-Gordon relationship. James is actually getting shamefully little play in the New 52 in general. That would fill a need. As it stands, this book only fills the “need” to have a title called “Detective Comics” in print. Worthless.