Taylor: The last bite from a bag of Doritos is not the best. Having eaten more than my fair share of Doritos, I feel as if I can speak with some authority on this issue. So trust me when I say that Doritos are not good until the last crumbs. A much better bite is that last full chip you get in the bag. You know the one: it’s still a perfect triangle, it’s evenly coated in faux cheese powder, and it delivers the perfect crunch between your teeth. This last full chip is made all the sweeter by knowing it is the last of its kind, never to return until you make the shameful trip to the grocery store for more junk food. And while the crumbs and the half-chips at the bottom of the Doritos bag are tasty, they don’t come near the tasteful bliss that is a full chip, the way the gods intended Doritos to be eaten. In just the same way, the penultimate issue of Sword of Sorcery delivers on all of the hallmarks that make this short lived series so good, giving us an issue that is perhaps the last, best taste of the title.

Eclipso has made his terrible return to Nilaa and with it his plans for domination of all its lands. He first killed Lady Senshe, knowing that she would remember him and also remember how to stop him. Now, the power of House Citrine has transmitted to Ingrive, leaving her in a coma induced by “data dump” of all Nilaa history magic. Snapping into action, Graciel orders Amaya and Preet to watch over Ingrive while she musters her forces to battle Eclipse. Meanwhile, Eclipso is equally busy massing his own forces. First, he stops by House Onyx to reclaim his throne and grab some followers. Next, he travels to House Diamond and quickly dispatches Lord Reishan and sets up the evil Prince Zushan as his pawn. Prince Hardan, who isn’t terrible, is saved by Lady Akikra, formally of House Onyx. Having reclaimed his former stomping grounds, Eclipso quickly sets off to capture Amethyst, a house divided.

In previous discussions of Sword of Sorcery, we have talked about the wonderful characterization Christy Marx has injected into the occupants of Nilaa. Everyone we meet has a definite personality that seems fitting and natural and perfectly in place with its surroundings. It’s easy to point at Amaya’s character as an excellent example of this characterization, but that’s already been done and — quite frankly — that’s something we should expect from a titular hero. However, what’s more exceptional is the portrayal of House Diamond. I love these guys. While a complicated villain is always a treat, sometimes it’s nice to have an antagonist who in every way is a terrible person. Prince Zushan fits this billing to a T and I, for one, will miss seeing him be a complete asshole to everyone he meets. Not only does he let his father get killed right in front of him but then he tries to kill his own brother moments later! This all just so he can be a  slave to a man/demon he met thirty seconds previously: nuts! While he might not be the most well-rounded of Marx’s characters, he is perhaps the most entertaining. It’s just never been so fun to hate someone.

What perhaps makes the reemergence of House Diamond in this series so good at this point in the title’s run, is the knowledge that they won’t be around for long. Sword of Sorcery shuts down after next month’s issue and while House Diamond will certainly get some play in that issue, it seems likely that most of the antagonistic bravado will be given to Eclipso. Because of this, I have the feeling this is perhaps the last truly jerky thing we’ll see House Diamond pull off. A nice middle finger riding off into the sunset like an aggressive driver on the highway. So, much like that last full chip, perhaps this is House Diamond’s most delicious moment. 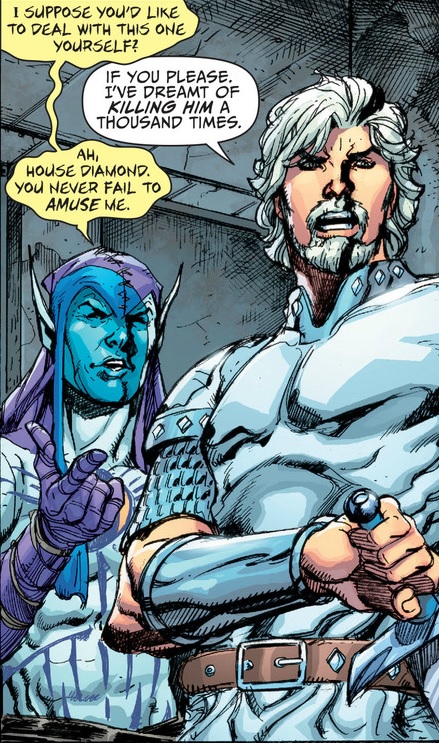 Yet this isn’t the only cause for some remorse in the issue. While I enjoyed SOS 7 quite bit, it is evident that the events in Nilaa are being rushed, especially when compared to the pacing of the first couple of issues. We get some nice moments where Amaya undergoes some growth (always a strong point of this series) such as when she realizes the treachery of Constantine. However, there is precious little time to let this lesson set in or take effect. We can’t blame Marx for this, after all, she is on a timeline. But it only makes you wonder what could have been for this series. In particular, it seems like the relationship between Preet (my boy Aladdin) and Amaya is being a bit forced. While it seems natural for the two to fall in love, they’ve only known each other for about five minutes when this scene happens. 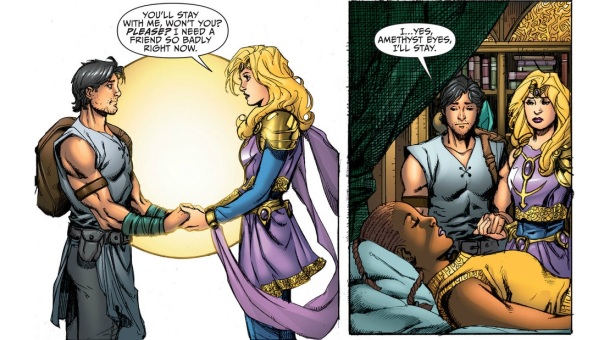 Again, this isn’t a fault on Marx’s part; she’s been doing an admirable job of finishing up this series in a limited run. However, it seems strange to me that Amaya would suddenly confide in Preet and ask him to be her friend in this moment of crisis. This is ultimately frustrating because while Preet is a fine choice for Amaya, given his princely qualities, but their relationship isn’t being given the proper narrative in which to breath and expand in a way that feels real. At least Marx has a tongue-in-cheek response saved for Preet that totally fits his character. His response to Amaya’s pleading:  “Yes, Amethyst Eyes.” Preet is in this for the girl and at least that seems natural. That is the sweet nacho-cheese powder that gives us all such pleasure.

Hi Shelby! What do you think of this second to last installment of Sword of Sorcery? Are you frustrated seeing such a good comic go a little off the rails due to reasons beyond its control? Or do you find things progressing in a natural way? It seems likely that the two halves of House Amethyst will come together in the next issue, how might that happen? Will we see any more flying Tiger-Dragons?

Shelby: I suspect our flying Tiger-Dragon days are behind us. I am frustrated to see such a good comic get canceled when it could be so much more. In just seven issues, Marx has done a superb job building complex characters and relationships; any frustration I feel at the rushed pace of this issue is due to the fact that it has to be rushed in the first place.

Even with the rushed pace, I can’t help but be excited. Marx has established a club of 17-year-olds to take on Eclipso. I can easily see Amaya, Preet, Ingvie, and Hardan coming together as a team of young rulers, not really ready for the responsibility but with SO MUCH HEART. Though, I think that Amaya and Hardan would make a better pair; since her dad was of House Turquoise, doesn’t that mean she and Preet are distant cousins, or something? Anyway, our final battle is shaping up quite nicely; Eclipso is leading Diamond and Onyx against Amethyst, Mordiel is wholly unprepared, and it’s up to our rag-tag group of dissidents and weak houses to save the day. And let’s not forget about that ghosty bit of Amaya’s dad Constantine unleashed last month, I’m sure he’s going to play an important role in the upcoming battle.

As excited as I am for what this title is, I’m bummed out by what this title could have been. In that, it could have been so good, and it’s not going to be. The politics of this book are already extremely complicated in the best way, and we’ve only met a handful of houses; there must be more houses we haven’t met yet, what roles were they going to play? Or Amaya’s friend Beryl back on Earth: with a name like Beryl, she must have been important to a story based on gemstones. We could have had a real fight for power in House Diamond, between the asshole lord, douchebag prince, and nice guy second prince. Taylor, I certainly don’t doubt your authority when it comes to Doritos, but I don’t think next issue will be just the crumbs. With the epic battle ahead of us, I am hoping next month will give us not just the last perfect chip, but the rare and beautiful TWO CHIPS stuck together; I want the extra-satisfying doublecrunch of complex fantasy story and characters combined with Aaron Lopresti’s and Hi-Fi’s sparkling gem-tone art. Plus, with writers like Jeff Lemire who seem to revel in using magic-based characters, I think we’ll have a few amethyst-colored crumbs sprinkled through the dark side of the DCU in the future. Next month Taylor, we can read the last issue together and cry into our Doritos; just make mine a Cool Ranch.