Patrick: As comic book fans, we’ve grown used to the idea that death is but a temporary obstacle. You can kill anyone you want really – DC’s five biggest (Clark, Bruce, Hal, Barry and Diana) have all been dead at least once. So we can be forgiven for speculating just how a hero could come back from the dead within minutes of their passing. We totally do that too – don’t believe me? Check out our 90+ comments on Batman Incorporated 9: many of which address the permanence of Damian’s death. We’re jaded assholes, and we know that at the end of the day, this magical storytelling aparratus is a business. I’m happy to report that DC’s resident asshole — Mr. John Constantine — takes much the same attitude, even when it comes to his own untimely end.

John Constantine has died. Sorta. He’s floating half-way between dead and dying, when he’s confronted by his poor dead buddy Christopher. Chris alerts the Cults of the Cold Flame to John’s tenuous grasp on life, and tries to exact a little post-mortem revenge while he’s at it. The Cold Flame’s minions descend on The Joint, and while John’s pal Lloyd does an admirable job of fending them off his a shotgun, they only seem to be interested in snatching Chris’ soul. Before the whole thing gets out of hand, Papa Midnite appears on the scene, returning JC’s soul to his body and thus solidifying their alliance against the Cold Flame. They might just need that alliance yet: Tannarak has used the momentary confusion to discover the king of all magic lodes – John Constantine’s stash of magical objects. 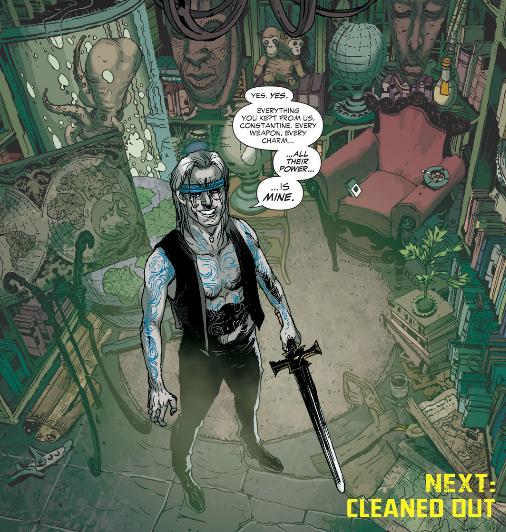 This isn’t even the first time John’s been brought back from this  kind of experience. I don’t necessarily want to say “from death” because Ray Fawkes is careful to never say that John straight-up died. But this grasp on life was certainly paper-thin. I love that this is just a hazard of the job that John accepts freely. He’s been around the block enough times to know that, in this line of work, people die. This isn’t just our lovable, jaded asshole saying this either – this is wisdom he divined from an ancient sorcerer’s secret diary. Of course, it’s John’s shrugging attitude that make this maudlin fact go down so much easier. John doesn’t quote the wizard Tenebrus, but he does dis him and then summarize his idea in that delightfully cheeky way John expresses everything. As this appears on the first page, the entire issue has a sense of lowered stakes – this isn’t the life and death of John Constantine, just another in a long list of times John probably should have died.

There’s also a weird little bit of justification in the conversation between Chris and John – I’m eager to see how willing people are to buy John’s version of the events. Constantine insists that Chris’ abilities were going to slowly — and painfully — kill him over the next five or six months. I don’t really know how much it alleviates his guilt that he murdered a terminally ill friend, but John presents it as pretty cut and dried. Even if that logic could have assuaged Chris’ anger, there’s still the fact that Constantine doesn’t do anything to save his friend as the demonic fetches whisk him off to hell. I know he’s sorta dead at the time, but still.

But that does leave me hopeful that Chris is still in play somewhere. John knows full well that dead ain’t necessarily dead, so maybe I should be a little more patient with the dude, and let him play out his long game before judging him.

I just want to share two quick things that I loved to pieces. First is that Zatanna leaves a backwards-magic spell on her outgoing voicemail message that makes telemarketers forget her phone number. Some practical magic – finally. And second is that the Cult of the Cold Flame has this awesome fascination with the archangels. The prayer / ritual thing that Tannarak leads his followers in mentions them one at a time, each in a different position relative to the speaker: Raphael in front, Gabriel behind, Michael on the right and Uriel on the left. Shelby, I know that you’re a sucker for this kind of Christian imagery — we both are — but my Sunday Schoolin’ on the subject of archangels is sorely lacking. From some quick googling, the only thing I can really deduce is that there is no definitive list of archangels, but Gabriel, Michael and Raphael are about as close as you come to a core group, with Uriel being a semi-popular runner-up for fourth place. Do you think there’s some significance to including a fourth archangel? Perhaps a reason that has less to do with the holy trinity and more to do with the four Wizards of the Cold Flame? Also, why is Tannarak so much cooler than the rest of them? Is he blinded folded or is that a bad-ass ninja mask?

Shelby: There is not much that pleases me more than applying my 20-odd years of church-goin’ to pop culture. It’s actually one of the reasons I like Constantine as much as I do; I have a fascination with the mystical side of Christianity. I have a lot of personal issues with Catholicism, but I love the ritual of it, the sometimes somber darkness of it. Anytime I can cross-reference my traditional Lutheran upbringing with secret magic and popular media, I am completely on board.

That being said, I don’t know a ton about the archangels; my most recent exposure to them was in Supernatural, and there (SPOILER ALERT) they’re pretty dickish. One interesting tidbit: Satan is also considered an archangel, though a fallen one. If Patrick’s theory pans out, that Tannarak calls the four archangels because they represent the four mages, wouldn’t Constantine make for a perfect fifth fallen mage? Another interesting tidbit: in some Jewish texts, Metatron is named an archangel, and not (as you would expect) some sort of battle robot.

Fawkes does a great job of moving the plot along, with Papa Midnite helping out and Tannarak robbing John for the sake of the Cold Flame, but my favorite part of this story is John’s ghosty conversation with Chris; it’s a perfect representation of everything that makes John who he is. He is, first and foremost, an asshole; telling Chris that he used him because he was going to die anyway is pretty callus, even for Constantine. We’re talking about a sick kid with no one else to turn to, and Constantine doesn’t hesitate to manipulate him to get what he needs. At the same time, there’s a real chance that, deep deep down, John is a good guy. Chris has been haunting him and has teamed up with some sort of astral spider to take John out in a very eternal way, and still John tries to help him when the fetches come for him. I won’t lie, I would love to see Chris’s spirit held as some sort of hostage by Tannarak, and Constantine has to choose his fate. Again. And of course, John is an arrogant asshole. When the fetch comes for him, John defeats it by basically shoo-ing it away; to John, it’s such an insignificant creature, it doesn’t warrant any real attention. On top of all that, John has the temerity to tell it that, when he does die, there are gonna be WAY more powerful entities lining up for his soul. What a prick; it doesn’t make him any less arrogant to know that he’s almost certainly right.

In one character interaction, Fawkes highlighted for us just how complex a character John Constantine is. You love to hate him, and you end up rooting for him the entire time. Who else can con a witch doctor into bringing him back to life from the astral plane? Who else would flat out let a young man be horribly murdered, and then try to help that same young man’s ghost move on to his final reward? Fawkes is doing a great job establishing the voice of John for DC readers, and just reminds me over and over again why I love this character so much. Oh man, I hope that, next issue, Constantine confronts Tannarak and tells him to quit trying to make fetch happen.