Taylor: Despite its dubious reputation, the 1990 live action Teenage Mutant Ninja Turtles film is actually a pretty good movie. While some see it simply as a cash cow (which, it also certainly was), it also has a good amount of heart and depth. Midway through the movie, the turtles get pretty beat up by the Foot Clan and Master Splinter is captured. The turtles retreat to April’s farmhouse and while there, they heal and experience a spiritual and meaningful growth. They learn to function better as a team and dig into the depths of their beings and find what it is that makes them special. This is the climax of the movie. These scenes are where the turtles come into their own and turn the corner and realize they must and can defeat Shredder. With this in mind, it’s exciting to see the TMNT series move its focus to April’s farm. In the wake of City Fall, what can the turtles learn? What must they learn in order to survive as a force for good and family?

Having just barely escaped Shredder and his goons, the turtles decide it would be best for them to lay low for awhile. While still licking their wounds from battle, they set off with April and Casey to the farm April’s parents own in upstate New York. The change in locale is certainly a welcome change of scenery for all, but tension among our heroes is running high. Leonardo, while no longer under the influences of Shredder’s brainwashing, still is a soul lost. This causes unease in the camp when things are made more awkward by the appearance of Alopex, who has recently defected from the Foot Clan. Amidst all of this, some tidbits are dropped concerning the role April’s parents played while they worked at Stockgen.

As Christmas is just a few days away, undoubtedly many readers will find themselves visiting their parents in the places they used to call home. There’s something undeniably comforting about returning to the place we once lived. It’s familiar and despite the years it often retains the feeling of safety we gained from being taken care of by our guardians. While the turtles aren’t returning to their home in any way, they are — in a sense — making an escape by absconding to April’s farm.

The farm itself is picturesque and the fact that April’s parents live there imbue it with a feeling of comfort, despite the fact that like the turtles, readers are being introduced to this location for the first time. The artwork of Sophie Campbell does much to establish this tone. It has a childlike simplicity to it that is reminiscent of storybooks which serves to lull the reader into a feeling of security of warmth. While that might sound pejorative, that certainly couldn’t be further from the truth. After the madness and violence that was the City Fall event, the turtles, and us, all need a break. What better way to supply this notion than with a style that is welcoming and warm? Our first look at the turtles, hunkered in the back of April’s van, is a perfect example of this.

The way Campbell designs the characters is simply stunning. The turtles, with their oversized limbs and baby-ish faces, look every aspect of the teenagers they are supposed to be. But it’s also remarkable that on their and Splinter’s face there is remarkable amount of expression. Technically the turtles won their latest encounter with the Shredder, but you wouldn’t guess as much based on this panel. Still, this simple design of these characters is both soothing and appropriate for an issue that promises to be a time of healing for our heroes. In particular, the way Campbell draws Leonardo throughout the issue is enlightening,  as he is seen here in a beautiful panel balanced by the moon.

While he no longer wears much of his Foot Clan attire, he still retains some of its vestiges. This shows, in a subdued manner, that Leo still isn’t one the turtles again. He’s straddling two worlds right now and his attire represents his confusion at the moment. Also, he is completely alone even though he is with his family. This is mirrored by the Earth’s own lone moon hanging over head, which like Leo, is suspended and solitary in its current state.

On several pages Campbell also uses an overlapping technique which, again, is deceptively simple and incredibly effective in moving along the plot of this issue. Shortly after they arrive at the farm, Raphael and Leonardo get into a tiff after Alopex makes her dramatic appearance. What starts as a verbal altercation escalates to a physical entanglement. Campbell depicts this escalation all in one beautiful panel, with the argument shown in the foreground and the beginning of the physical battle in the background.

The effect catches you off guard at first and upon a first reading it’s a little unclear if what’s being shown in the background is actually happening in real time. However, it’s easy enough to orient yourself to this technique and then it becomes nothing but a delight. In particular, the setting of the fight in the background is pleasing as it emphasizes that the differences between Leo and Raph are not in necessarily in martial skill but in their personalities. Further, it’s telling that it’s Leo initiating the contact here. Before he was the calm and collected one while Raph was the hot head. Those days, at least for now, no longer exist.

Patrick, Campbell’s art is great in this issue: is there anything else you have to say about it? Oh, and what about the events that took place? What to make of Alopex? What to make of Leo’s continued rejection of Splinter? Will this home away from home be able to heal his and his family’s wounds like it did in the TMNT movie?

Patrick: Taylor, you know I love the that 1990 live action Ninja Turtle movie. I still think that manages the closest thing to a perfect tone for these characters in a video medium – not too goofy, not too magicky, but also not so self-serious as to lose what’s fun about, well, Turtles who are Ninjas. In a lot of (totally trivial) ways, that movie taught me what I can expect from franchise movies, and showed me that even the ultra-pulpy, relatively disposable pieces of pop ephemera can be thoughtful and heartfelt. In short: that my dumb action movies can also be substantial experiences. A revelation for 8-year old Patrick (do that math if you must – I’m 31), but I trust there are a bunch of people in my generation that felt the same way. It’s one of those silly formative moments — like Optimus Prime dying in the Transformers movie — that I always have in the back of my mind. Going to Northampton is going home in a very real way for me, as a reader, for that very reason.

The tricky thing about going home, is that you’re supposed to never be able to do it again. April obviously snaps right back into familiar patterns with her parents, and most of the Turtle brothers are at-home with their family. All, of course, except Leo. I actually had to put my Kindle down for a second when Leonardo rejected Splinter’s leadership. 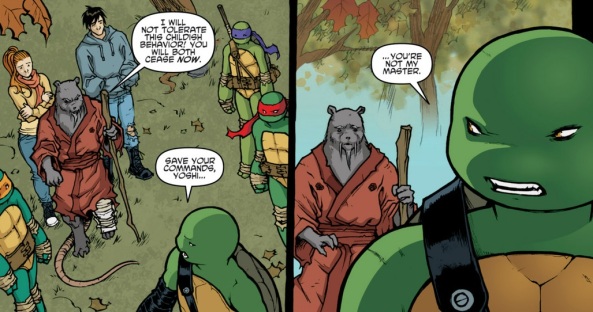 Tom Waltz conveys Leo’s entire crisis in one word: calling his father by his given name, “Yoshi,” instead of the more formal “Sensei,” or even something like “father” or “master.” In fact, by the time he actually gets off the line “you’re not my Master,” it’s too late, we already know that the connection between father and son is irreparably damaged. Look how he won’t even meet Splinter’s gaze! Leonardo has firmly rejected the Foot Clan, which is an easy enough move to make internally – the way they conduct themselves is objectively evil. Leo knows himself at least well enough to know when a thing ain’t right.

The problem is that things ain’t totally right with his family either. Donatello is quick to write off his brother’s experience as “brainwashing,” but Waltz and Kevin Eastman and Bobby Curnow (who both receive story credits along with Waltz) are playing at a much harder idea here. Leonardo is older, smarter and more capable than his brothers, and between his previous life — which he can’t shake the feeling of remembering — and his time with the Foot, he’s gained more experience than the rest of them. So when Splinter tries to come down on him as the ultimate authority, Leo cracks back with an instantly recognizable “no one tells me what do!” That’s a real-life teenager response to parental authority, made all the more confusing by the fact that he’s also got some cryptic guidance from an absentee mother.

Leo’s quick flashback sequence is brutal, and it cashes in on all the pain of the last 7 issues, leading to the saddest drawing I’ve ever seen of Leonardo.

This is what they came out to the country to fix: Leonardo needs to find that which he has lost. And there’s no quick fix for that. It’s not like they’re going to meditate until someone divines Splinter’s location or something like that. I can’t help but see this road to recovery paralleled by April’s father – he may never really be the same, and it’s a long and slow journey to even being functional again.

I couldn’t be more excited for the rest of this story arc. I’m a sucker for stories that bother to get into the nitty gritty of emotional fallout, and, boy howdy, do these brothers have emotions to fall out of. I know there were very few punches being tossed around (an absolutely zero robots!), but that’s precisely the speed I want to move right now. Plus, while we didn’t even mention it here, that little tidbits about StockGen being destroyed and the O’Neil family history with company leave the doors open for revelations of every variety. I saw the smoldering rubble of a StockGen lab on the first page, but it took me back a second. I’m pretty sure we didn’t have that information yet, right?

Honestly, I’d mostly forgotten about Krang, Baxter and the Rockmen (and mousers!). It’s been since before City Fall that we last saw Karai killing one of Krang’s Utrom ilk and stealing his ooze in issue #20.

Rest up Turtles, looks like you’ve got a fight ahead of you too.