“Thus it shall befall Him, who to worth in women over-trusting, Lets her will rule: restraint she will not brook; And left to herself, if evil thence ensue She first his weak indulgence will accuse.”

Drew: How long do you suppose sexism has existed? The Bible would have us believe it’s basically as long as human sexes have existed — Adam was created first in God’s image, with Eve following up as an afterthought of sorts, made of Adam’s spare parts. Coincidentally, she’s also the one who is tricked (or at least talked into) eating the apple from the tree of knowledge first. Sin may be conceived in the mind of Satan, but it’s brought to humanity in the shape of a woman. I appreciate that this is a bit of a tunnel-vision reading of the creation myth — the Bible is full of men who sin without the aid of women — but the notion that women are lesser beings who tempt men to evil continues to pervade our culture, from  how much women are paid at work, to blaming women for “provoking” physical attacks (or threats) against them. Gallons of ink have been spilled over this very subject, but Greg Rucka and Toni Fejzula manage to find a new angle in Veil 5, providing an anti-Eve story that — no surprise — feels decidedly more empowering than the original.

As the issue opens, the rat Dante killed springs back to life, and latches on to Gabriel, effectively possessing him. That someone named Gabriel should serve as the messenger for a supernatural entity should make the biblical overtones clear (you know, if the character named Dante and the presence of demons from Hell haven’t done that already). Meanwhile, Veil has returned from her assassination mission, and now Cormac intends  to demonstrate his power over her. Again, the imagery isn’t particularly subtle — the totem of her servitude is an actual chain — but they serve the capital-t Themes of this story perfectly. Just as Cormac pins Veil down to have his way with her, Dante makes as heroic an entrance as I’ve ever seen.

Cormac’s power over Veil forces her to attack Dante, but it doesn’t stop her from giving advice about how to best defeat her. Dante is able to wrest the chain from Cormac, freeing Veil to rip Cormac’s heart out. Happy ending, right? Well, that’s when Gabriel arrives with the rat (who swaps out bodies for the freshly corpse-ified Cormac), and offers Dante a deal: if Dante gives the chain back, Satan will heal the injuries he suffered during the fight (injuries that are tellingly around his rib area).

It’s a clever inversion of the Eden story: the temptation isn’t freedom, but of slavery; the devil takes the form of a rat, not a snake; the appeal is made to the man, not the woman. It’s that gender inversion that I’m most interested in — this issue deals in some heady issues about possession and power over women — and flipping the story of original sin should absolve women of the “temptress” label they’ve been saddled with throughout history (Cormac even goes so far as to tell Veil it’s her fault as he’s attacking her), but it also weirdly places a man as the source of that absolution.

When Dante ultimately gives Veil the chain (which she promptly breaks), it’s not just that she’s gaining freedom, it’s that it was given to her by a man. It certainly reflects the realities of gaining equality — those in power are going to have to agree to share it — but it doesn’t make for the most empowering arc for Veil. She has virtually no agency in her own emancipation — she may have known what was needed to get free, in the same way a prisoner might know where the keys to their cell are kept, but she needed a benevolent man to actually get it for her.

Maybe I’m allowing my cynicism to focus on such a pessimistic reading — there are certainly enough symbols in this narrative to support several alternative takes — but I think it boils down to Dante’s use as a “white knight” here. It satisfies some very prevalent narrative expectations, but maybe at the cost of saying anything new about those roles. Or maybe Veil saving Dante at the end does that. Or maybe I’ve built up some expectation that this series will invert gender tropes that is kind of unfair. I guess you can take your pick as to why I’m wrong, Greg.

Greg: Drew, the only part you’re wrong about is thinking you’re wrong about a part! I agree with your reading, though it brings up a morally tricky ground of representation in stories versus narratively constructive necessities in stories. While I’d like to give Rucka and Fejzula the benefit of a doubt that they’re not making blanket statements about gender, that this is merely the story of a specific woman and some specific men, your highlighting of this titles loud and non-obvious symbols and themes seem to communicate the desire to say something big. Thus, while it’s a visceral thrill to see Dante burst in the door toting a big ol’ gun and spouting some action movie trash talk, it’s an intellectual regression to think that this poor woman, bound against her will to a man’s desires, needs another man with a big ol’ dong to save her (like you said, loud and non-obvious symbols).

For me, the central flaw in Rucka and Fejzula’s attempt at making a progressive statement comes into clarity here: 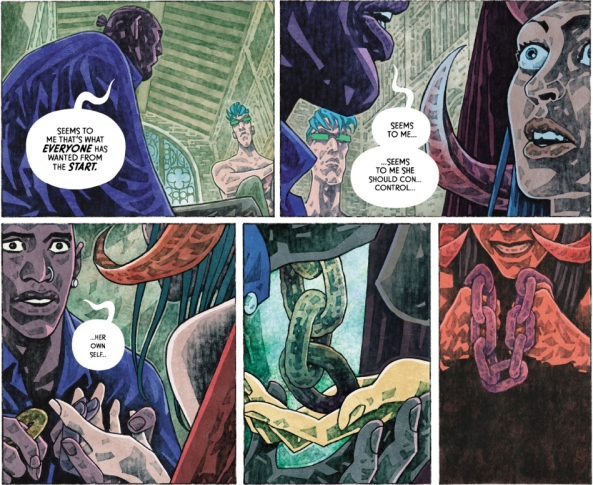 At the same time, the story of Veil on a nuts-and-bolts level kind of “needs” Dante to come in, guns blazing, and rescue Veil. Drew, you used the word “satisfies” when talking about this issue’s conformity to narrative tropes, and while you meant it as a criticism, the root of that word is positive. It feels fulfilling on a base level to see Dante make a heroic sacrifice, to see Veil tear Cormac’s heart through his chest. While another version of this story exists that satisfies us critic types with an incisive dissection of sociopolitical values, is that the “better” choice? And isn’t that ultimately what we’re poking at qualitatively with these reviews?

Hmm. Now both of our halves have ended with the author thinking they’re wrong. I guess that means Veil is doing something right.