My feeling is, story is the apple, plot is the arrow through it. (Or, story = mountain, plot = path through the mountain.)

Drew: I’ve often attempted to distinguish between the “story” and “plot” of a narrative, but because those terms are often used interchangeably, I’ve never felt like I was being totally clear. Little did I know that Russian formalist Vladimir Propp had actually coined the specific terms I needed almost a century ago: fabula is the chronological events of the “story”, while syuzhet is the narrative arc as laid out in the “plot”. There are a great many stories where the distinction is trivial — the events of the story are presented in chronological order — but in a world full of flashbacks, flashforwards, and other chronological twists and turns, it’s helpful to be able to differentiate the two.

In most cases, the syuzhet is crafted to enhance the audience’s experience (to obscure a key detail of a mystery or to remind us of a detail as it becomes important), but it can also be used to reflect a character’s subjective experience of the fabula. LOST did this well, showing the audience proustian memories brought about by triggers on the island, but there are a few stories that take that concept a step further, where the character’s experience of the fabula is more explicitly achronological, allowing the syuzhet to track the fabula, even though neither is arranged chronologically. The “backwards” order of Memento simulates Leonard’s anterograde amnesia, and the “Watchmaker” chapter of Watchmen simulates Dr. Manhattan’s omnipotent experience of time. Matt Kindt and Trevor Hairsine’s new Divinity clearly has a great deal in common with that latter example, even if the subjectivity of the syuzhet is less explicit.

The issue follows the life of Abram Adams, a mid-century Cosmonaut selected for a top secret, 30-year mission to the edge of the galaxy. In the present day, Abram has returned with incredible powers, including, perhaps, the ability to travel to and re-watch his own past. It’s not entirely clear what’s going on by the issue’s end, but the issue opens with adult Abram apparently observing himself as an infant. 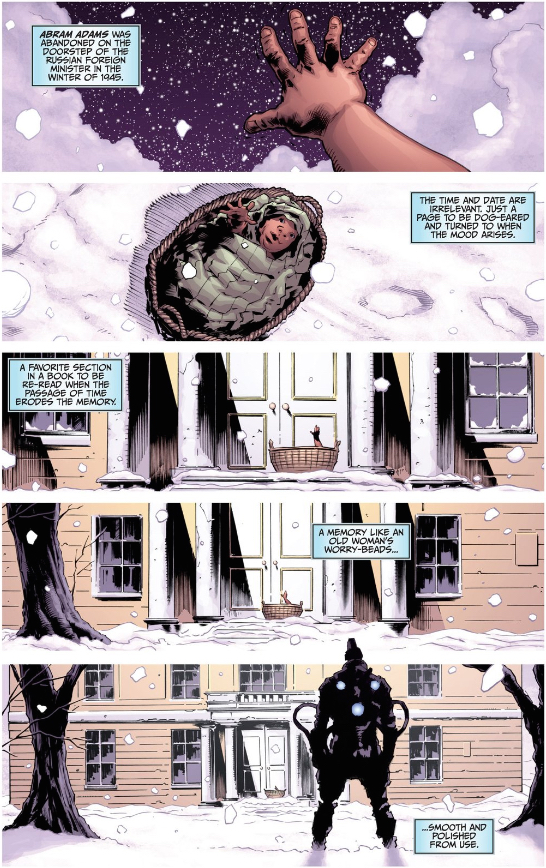 I’m not entirely sure what to make of that reveal, but I’m struck by the biblical imagery of little orphan Abram. A baby in a basket is an evocative image, but Kindt goes much further, giving the child the dual-biblical name of “Abram Adams”. “Adams” is particularly notable for being so distinctly not Russian — the importance of that name clearly supersedes any sense of verisimilitude. Even before we learn of his ability to travel through time and spontaneously will oases into existence in the Australian outback, we understand this to be a holy character (never mind the title of the series). That kind of symbolism runs the risk of feeling a bit heavy-handed, but with only four issues in this miniseries, is using every tool he can to set our expectations for this character.

Unfortunately, not every detail comes across as clearly. Indeed, the very same time-crunch that makes all of the biblical imagery so efficacious swallows up many of the details of Abram’s training. I’m specifically referring to the set-up that every detail of Abram’s life is monitored.

Kindt makes a clear enough case for why the government would want to monitor Abram, but doesn’t hint that this might bother Abram in any way. It also feels like a bit of a throwaway detail, introduced in a training montage, looking for all the world like the Soviets’ surveillance of Rocky’s training in Rocky IV. Indeed, when Abram loses his tail a few pages later, it barely registers, since there doesn’t seem to be any motivation to. Heck, even the voiceover talks about how excited Abram was for the mission (suggesting that he wouldn’t want to do anything to jeopardize it). But then we learn that he actually has a secret life. 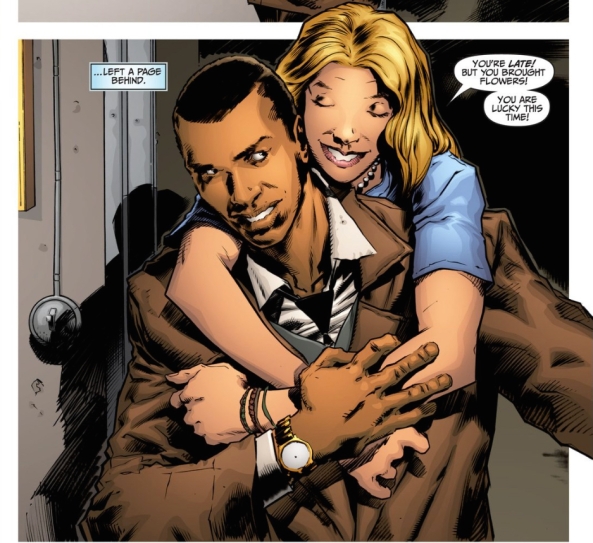 Kindt introduces Eva (another anachoristic biblical name) to represent some kind of conflict for Abram, or perhaps just his willingness to sacrifice romance for his mission, but since we only see her for a single panel before Abram breaks up with her, it’s hard for us to be particularly invested in their relationship. Is this a sacrifice for Abram? As its presented here (ostensibly through Abram’s time-traveling eyes), I don’t think so. He used Eva to “feel something new”, but was happy to discard her when something even newer came along. The real question for me is if this makes Abram admirably driven, or despicably selfish (or perhaps both), and I’m not sure I have an answer.

That seems like a good place to turn things over to you Ryan. Do you have an opinion about Abram’s actions there? Do you agree that we’re seeing the world from Abram’s future perspective? Oh, and how did all of the similes and metaphors sit with you? I think a few might have been stretched just a bit too far for my tastes.

Ryan: When considering Abram’s actions, two perspectives spring to mind. The first is the current cultural undercurrent glorifying the grinding lifestyle and self-agency of the national start-up community, specifically that of San Francisco, Austin, and Silicon Valley. Many of the players in this world recently graduated college, or dropped out all-together to pursue their “Social Network”-esque dream, trying to be the next lynchpin in social media, or the killer app the explodes to Angry Birds or Tinder proportions. But, to Drew’s point, should this single-mindedness be lauded and mimicked, or should it be recognized as potentially two-dimensional and stunting? I see the merit in the habits of the goal hyper-oriented as they sleep for 3.5 hours a night while working manically as a full-stack software engineer or UI/UX designer and front-end programmer trying to finish in time for the next round of seed funding, as long as we understand that there are other paths to success, and living and dying by one’s goals can be a toxic path.

With this in mind, something almost certainly went wrong in this ubermensch’s journey. Abram Prime — the main one we see in the suit, as I shall refer to him to avoid inevitable confusion — treats his continuity as a grand book metaphor, and the audience immediately catches him re-reading chapters in his life, “just a page to be dog-eared and turned to when the mood arises.” This act, however, is essentially masturbatory, akin to looking through one’s entire gallery of Facebook photos (or an ex’s) to procrastinate while trying to write a term paper or *cough* comic book review. While I totally commiserate with the urge to relive certain moments from my past and pulling a Huck Finn at my own funeral or birth, to what end is Abram Prime perusing his past? Despite the brevity of Eva’s appearance thus far in the syuzhet (I think I did that right, Drew) to the point of seeming an afterthought, there stands a fair chance that she is a large part of his retrospection and that her character will play a meatier role in the future issues

She needs to. Otherwise, how can the reader relate to the character of Abram Prime? Ignoring the sometimes opaque narrative voiceover ostensibly in Abram’s voice, seven lines of dialogue total are spoken by our main character. This is reaching an almost Gordon Freeman level in protagonist dialogue, and Dr. Freeman — from the beautiful games of Half-Life — only works narratively because he is vessel of the player’s actions, a cipher onto which we can project our own motives. Abram is not that, even when factoring in his voiceover. A wise English professor once warned me to always be critical of the narrator. Can we trust them? Are they as infallible and omnipotent as they seen? Can we be sure what kind of madness may lay behind Abram Prime’s sclera-exclusive eyes, gleaned from staring down the edges of time and space until something blinked?

See? He totally used to have real-person eyes.

As the book metaphor carries on, we learn that there is another Abram, David Camp, with the potential for more. Hopefully the dynamic between the two will provide illuminating to the audience as the fabula starts catching up with the syuzhet. Camp and Abram Prime are likened to “two opposing pages in the same book” who meet when the book is closed. To steal from Tom Stoppard, will we find these characters to be two sides of the same coin, or the same side of two different coins?

I’ll admit; this issue got fairly confusing. The aboriginal men seen on the spontaneous paradise in Australia may be just that, but they could ostensibly be more of Abram. The last page helped to add even more mystery: 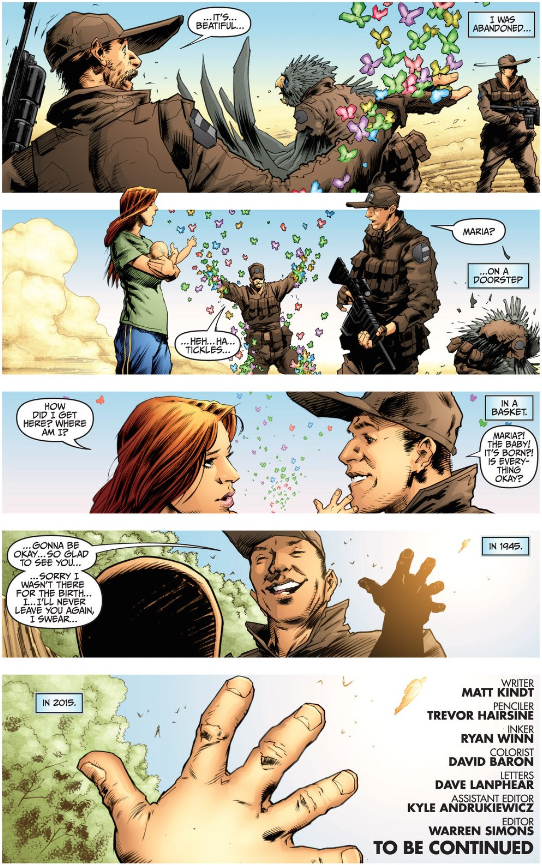 It seems as if Abram Prime also possesses the abilities of far sight and matter manipulation on top of his time traveling and teleporting, as he seems to turn the reconnoitering squad of what seems to be a private military security force into a bird-man, a kaleidoscope of butterfly, and a distracted family man, respectively. If that sequence alone did not confuse you, then the visual allusion provided by the spontaneously-appeared mother/baby and its cute outstretched hand paralleling the same of baby Abram back in the winter of 1945 effectively book-ending the issue just might. Why? Because we do not know whether or not Kindt is intimating that this child is also Abram. The rules of this universe have yet to be concretely established. Maybe there are none. Admit it: that thought alone will make you pick up the next issue, just like I will.