Taylor: When watching any of the Star Trek series you quickly become aware that every episode centers primarily on one character. Depending on how important the character to the series, they’ll have more episodes than others. For example, Picard generally gets about five to six focus episodes each TNG season while Troy gets two to three. Generally, this means you know if an episode is going to be good or not. Picard episode? Yes! Geordi episode? No. With as cast that numbers somewhere in the thirties (at least) it comes as no surprise that Brian Michael Bendis would try this technique with Uncanny X-Men. This way, every character gets a taste of the limelight and most readers leave satisfied. The question though, is does this doom the series to a Star Trek-like cycle where some issues are great and others are not solely based on stars in them?

In a fit of frustration at Scott disbanding the Xavier School, Illyana has transported herself and Kitty Pryde to MONSTER ISLAND! The ostensible reason for this act is that she wants to rescue a stranded mutant, but in reality she might just want to take out her frustration by punching some monsters. After the required quota of monster punching is fulfilled, the ladies find their stray. Turns out her name is Bo, she’s maybe five years old, and her dad abandoned her on the island because she accidentally killed her own mom. Kitty and Illyana take this orphan and bring her to the Xavier School where she’ll hopefully live happily ever after…because that’s how all mutants live out their days.

Issue 33 is deviation from the primary story arc of Uncanny, and in doing so, it finds itself focusing on a couple of characters who generally don’t get the spotlight all that often. While Kitty Pryde and Magik aren’t B-listers by any stretch of the imagination, Uncanny is the story of Scott Summers and most other characters serve as backup. So this issue, with its lack of Cyclops or mutant school intrigue, roundly falls into the limelight side of things.

But is this issue like a Geordi episode? In some respects it is. The story is simplistic and like many of the Geordi episodes where he’s trying to get a date, it lacks any true emotional depth. The reason that this issue fails to touch the reader emotionally is that it’s billed as being an issue where Illyana and Kitty reaffirm their friendship for one another. 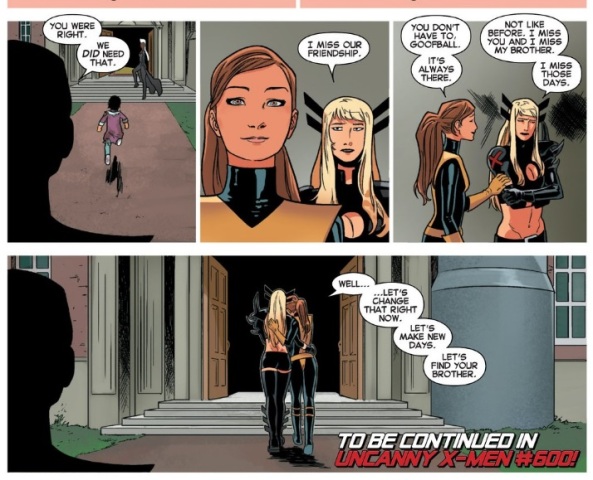 It’s a touching sentiment, but there’s no set up to this payoff at the end of the issue to make seem plausible.  The entire time that the two are on MONSTER ISLAND! they squabble and exchange barbs. Magically, when they return to the Xavier School, they realize that this hardship has brought them close together. The only problem is, this isn’t how relationships work. Instead of actually talking out their issues, Illyana and Kitty fight and then suddenly realize they’re friends at the end of the issue. If more of the dialogue in this issue focused on their friendship I could buy this, but as it stands, it just rings hollow. Just like a Geordi episode, where character development should be there’s just empty calories.

There are parts of this issue that do remind of a Picard episode, however. While it’s definitely goofy, I simply love that this issue takes place on MONSTER ISLAND!

Easily, this conceit could have failed, but Bendis pulls it off by making the monsters merely punching bags for Illyana and an outlet for her rage. This is particularly entertaining because Kitty refuses to take part in the abuse of innocent creatures and just phases out and watches while the fight unfolds. Of course, what makes this joke all the more enjoyable is that artist Kris Anka draws the monsters in a way that makes them look adorable. Just look at that guy chewing on the the tree! Or take a gander at his hairy friend down in the corner! Even the towering gargoyle like creature looks more grumpy then evil. MONSTER ISLAND! is not dangerous. It’s just plain funny and that’s something that makes this issue Picard-episode worthy.

Turns out one good joke does not an issue make. But what do you think? Did you enjoy this issue any more than I did? Do you think Bo will come back into play later in the series or is she merely just a catalyst to spark the friendship between Kitty and Illyana?

Michael: It’s been a long time since I sat down and watched an episode of TNG. I want to say that I remember liking Geordi, but yes, his stories never felt like something that was exactly essential to the overall narrative. So, unfortunately, Uncanny X-Men 33 was a “Geordi caliber issue” for me as well. To Taylor’s point, Magik and Kitty aren’t necessarily “minor characters” but in the larger picture, their rescue of a young mutant and the awkward rekindling of their friendship has very little to do with the conflict of Scott Summers and his place in the X-Men universe at present. However, Bendis has had a large group of X-Men under his care since he started All-New X-men and Uncanny X-Men, so he has to wrap up character arcs as best as he can before his run comes to an end in Uncanny X-Men 600.

I’m not really buying into the execution of this particular Kitty/Illyana arc though; things feel rushed and the connective tissue of the plot doesn’t feel all that connective. I like Bendis’ choice to pit Kitty and Illyana’s ideologies against one another set to the backdrop of a an epic Monster Island fight — Kitty’s pacifism in the face of pointless violence and Illyana’s bloodthirsty lashing out. The amount of violence that any superhero faces on a given day is 1000 times more than any that a normal human might see. The normal human can vent by doing all sorts of things: talking with friends about their struggles, going for a run or — let’s be honest — having a drink or five. When you’re a powerful sorceress and mutant however — yeah, you’re gonna punch some monsters in their monster faces to blow off steam.

A lot of the X-Men on Bendis’ books have switched teams over the course of Uncanny X-Men and All-New X-Men, including Kitty. While Kitty is the relative newcomer, Illyana has been a core member of Cyclops’ X-Men since this book launched; Kitty is the supporting cast to Illyana’s story. Uncanny X-Men 33, then, focuses on Illyana’s emotions and internal conflict, which is a mess of abandonment issues, existential crises and matters of family and friendship. Illyana says she’s come to Monster Island to save the cute little mutant Bo, but once she discovers that Bo’s father abandoned her on said Island she tells Bo that she’s going to kill her father. It’s not about saving young Bo of course; it’s about saving young Illyana. She sees her own past of growing up in a hell dimension and is going to do everything she can from letting that sort of thing happen to another young mutant girl. So this issue turns into a story about Illyana not wanting to deal with Cyclops’ latest bullshit, overcoming her own past trauma AND rekindling a friendship with her brother’s ex-girlfriend? That’s a lot of baggage to be addressed in one single issue.

Like I mentioned before, superheroes fight; it’s what they do. But it is sometimes more interesting to see them fight that superpower mandate and find another way. You have Kitty’s phasing through the entire battle because she doesn’t think that it’s right, and then there’s Illyana explaining how she goes on her own set of little adventures while the mutants and heroes are dealing with their most recent batch of personal drama back home. I’m not totally buying that explanation — Illyana is a warrior, after all — but it’s amusing and interesting to see a character in a comic book actively fight against what we as readers expect them to do. As far as the character of Bo is concerned, I suppose it’s possible that we could see her again someday. On the other hand, she is so clearly an analogue for Illyana and thus essentially a plot device. Bo kept reminding me of Hazel from Brian K. Vaughan’s Saga, not to mention any number of children with powers that they don’t have a strong control over. 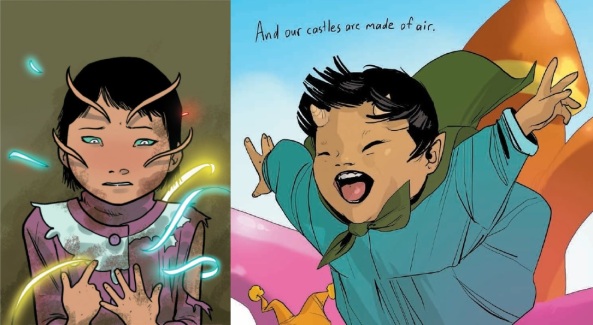 We’ve made this point before in many of our write-ups, but I can never help noticing the gratuitous sexualizing of female characters like Magik in comic books. Granted, Illyana’s costume has become the magical version of Emma Frost’s, so it’s hard not to make that argument. But you still have an action shot like the one below where the Anka frames the shot directly behind Illyana’s butt. There’s no way that you’re going to get a shot of a character like Batman or Wolverine framed like that; maybe that panel exists, but I highly doubt it. 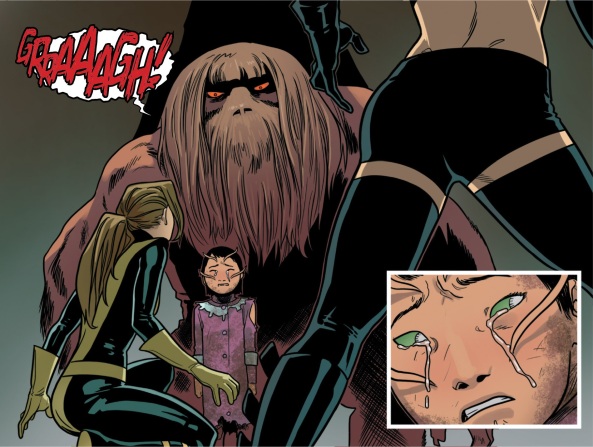