Michael: The minute I read that Grant Morrison was going to be doing a “Santa Claus origin story” I got super pumped. I hadn’t done a lot of research as to what the story was going to entail, nor did I gorge myself on every little bit of press that Morrison did on Klaus. All I had to go on was my favorite writer’s name and an image of the man who would be Santa Claus: a barbaric-looking figure accompanied by a savage wolf and covered in the blood of a freshly-killed deer, drawn by Dan Mora. That’s all I needed.

Klaus 1 marries a couple of different Santa Claus tales that I have experienced (Rankin-Bass’ Santa Claus Is Comin’ to Town comes to mind) as our hero Klaus visits the town of Grimsvig. This once happy town has turned into a joyless factory that produces coal and toys for the Baron Magnus and his spoiled son Jonas. After he asks too many questions and attempts to protect a boy from being beat by the local law enforcement, Klaus is attacked, thrown out of Grimsvig and left to his own devices in the cold of winter. Thankfully every mysterious wild man has a wolf companion to rescue him in such times of need. After Klaus and his wolf Lilli take down a devilish-looking deer, they rest their bones by the fire as Klaus contemplates how to help the people of Grismvig. Insert a little mystical woodwind music, some creepy forest ghouls and a psychedelic haze and you’ve got your first batch of toys from the future Father Christmas. “What do I do now?” Klaus beckons.

Like I mentioned before, I had no idea what I was signing up for when I bought Klaus 1. Based on that Dan Mora cover art I was sort of anticipating a satirical “bad ass Santa” who didn’t take shit from anyone – and I was okay with that. I’m very glad that Morrison brought me something that was completely different however. Just because Klaus is a seemingly fearless viking behemoth doesn’t mean that he’s not still Santa Claus – one of the kindest souls in all of folklore. That’s Grant Morrison for you, he tells us a new tale about jolly old Kris Kringle without losing the heart of the character. And since it is Morrison we’re dealing with, it should come as no surprise that this version of Santa Claus makes his toys in the midst of a musical/mystical acid trip haze. Up until that point I was kind of surprised at how straightforward the book was; then the weirdo ghouls showed up and proved me wrong. 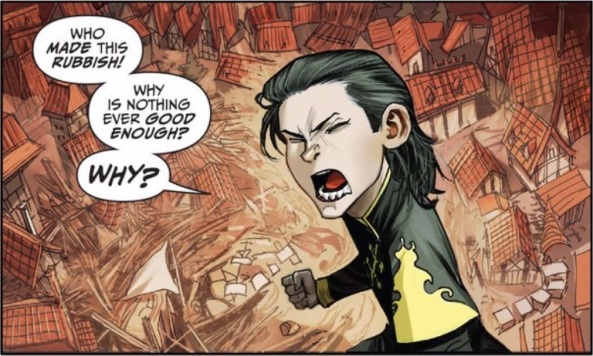 Morrison’s career has opened itself to meta-commentary, a form of criticism that Retcon Punch does so love. As straightforward as Klaus is thus far, you could make the argument for meta-commentary in the form of Baron Magnus’ brat son Jonas. Jonas bears a striking resemblance – both physically and behaviorally – to the early incarnation of Morrison creation Damian Wayne. While the issue doesn’t devote an overwhelming amount of pages to Magnus’ family, we get the basics: Magnus is an ass, Jonas is a spoiled little shit and the matriarch is… bored? Jonas could be a symbol for many different things: comic book readers, millennials, critics or just a gluttonous population in general. Jonas complains that nothing is ever good enough, while the very toys he’s complaining about are the ones that have been directly taken from the children of Grimsvig. That scene at the dinner table in particular was full of subtext and character dynamics. Whatever Lady Magnus’ intentions were when referring to our barbarian hero, Lord Magnus took offense to them as if there were an attack on his own manhood. Maybe Lady Magnus herself is just as covetous as her family, but her husband wants to take any potential suitors out of the running.

Dan Mora really drove this point home in my favorite page of Klaus 1. While Lady Magnus toasts the Yuletime sarcastically and Jonas complains about the meal prepared for him we see Klaus and Lilli taking down a mad stag that looks like it came straight out of hell. That’s a beautiful dichotomy right there – a bored mother and son who are disinterested in everything they have that they didn’t have to work for while Klaus needs to fight like hell just to eat and stay warm for the night. While reading this I couldn’t help but hear the beat of “war drums” for some reason. 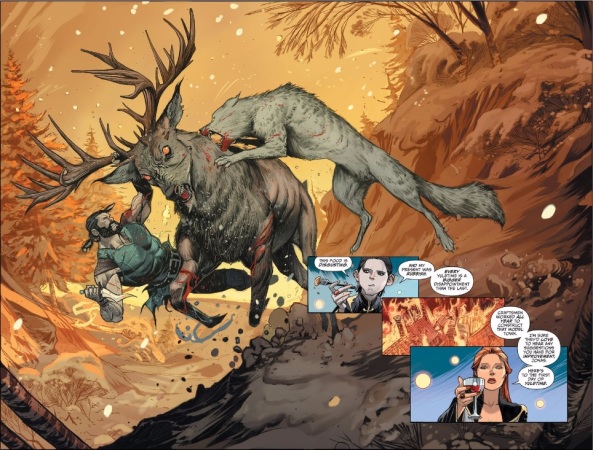 Patrick? How did this issue find you? Do you have any theories insight to the weirdo ghoulish pixies that enabled Klaus’ toy making? And we’re kind of just guessing that he goes by Klaus, right? I don’t think anyone in the book ever addressed him as such.

Patrick: Hahaha – I hadn’t considered that the character’s name wasn’t Klaus. I guess that makes me just like Homer asking “did Die Hard quit?” when he clearly means to ask “did John McClane quit?” But I guess even that assumption speaks to the power of the images Morrison is playing with here. “Santa Claus” is such a ubiquitous character that even an alternate spelling of his last-name unmistakably recalls the character. And even physically, the dude looks virtually nothing like we expect him to, save for that bitchin’ red hood.

And the fact that Klaus (or… whatever we want to call him) can look so cool while also being recognizable as a character that is anything but “cool” is a quality so specific to Morrison’s writing, I don’t think I would have believed that anyone else was behind this thing. Michael mentioned that this issue is more than a simple send-up of gritty-reboots or hardcore reimaginings of origin stories, but I think it is also that. There’s a bizarre mix of reverence and irreverence here that would feel totally at home in Multiversity or Batman Incorporated.

Let’s take Klaus’ first interaction in Grimsvig for example. The bartender is surly and tosses out some veiled threats against our hero’s well-being. But the conversation is impossibly cool and detached – both characters talk like they’ve had their dialogue punched up by a team of writers. 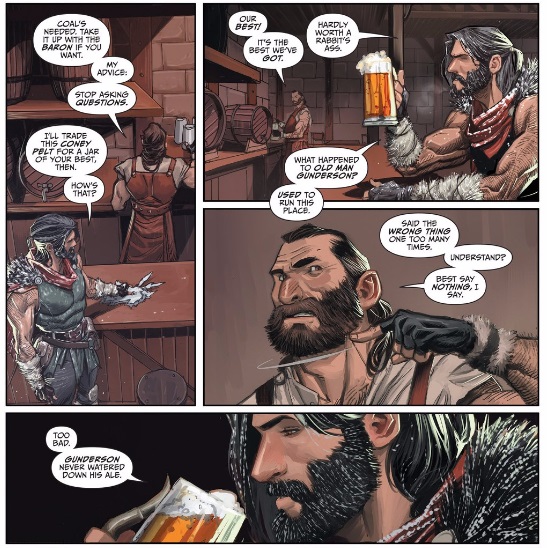 It’s totally an exciting scene to read, but it requires a recalibration of the jerkiness of Klaus, right? He’s a champion for children and an honest trapper, but he also casually insults someone who is trying to run a business? He can do it because it’s a good line. Our barbarian hero is an action movie hero at heart, so he needs to be armed with a quip.

Which of course means that Mora’s design for Klaus is just about perfect. He’s a ripped barbarian, with a clean beard and hair that’s sexier than it is messy. He’s like Kal Drogo without the tan or the braids. Even when he gets beat up, Klaus can never really look all that roughed up – his arrow wounds are so brightly colored that the blood looks straight-up festive. If you compare that to the table cloths in Magnus’ dining hall, it’s clear that even Klaus’ pain is more joyful than Magnus’ happiest days.

This is such a bizarre series – partially because we can’t help but look for Morrison’s grand statement buried within it. And it looks like there’s a moral sitting right on the surface level of things – a life of hording riches leads to loneliness. Maybe that’s the attitude Morrison is taking to Santa Claus himself; why shouldn’t we all get to enjoy some wacky new Santa Adventure? Keeping Santa’s origin entombed in crusty old Christmas lore was only making the character less relatable. I don’t know if relatability was something we needed in Santa Claus, but I’ll be happy to be proved wrong.