A galaxy far, far away is a busy place, and a long time ago was a very busy time for said galaxy. We can’t always dig deep on all the goings-on in the Star Wars Universe, but we can round up ’em! Today, we’re discussing Obi-Wan & Anakin 3 and Star Wars 17.

Patrick: In all of my writing about big franchise comics, I continually circle back to themes of identity. There’s something about different creators all tackling the same couple characters that forces them to re-investigate the core concepts of those characters. I’ve mentioned before that “meditating on the nature of Batman” is one of the defining traits of a Batman story, but you could argue that that’s really true for all superheroes. Why are people so bent out of shape about Batman vs. Superman? Because it gets those characters wrong and doesn’t have anything to say about who either Batman or Super man are. That may take the onus for creation out of the hands of the modern comic book creator, making them analyst-storytellers, which is probably why the medium appeals to me (an analyst) so much. Charles Soule and Marco Checchetto’s Obi-Wan & Anakin 3 uncovers an often-unexplored facet of Anakin’s identity – his previous life as a slave.

Soule approaches that identity from two different angles, one in the present and the other in flashback. Let’s start in flashback, because that’s a more relatable story. Anakin and Senator Palpatine hang out at a seedy Corurscant club so Anakin can observe how the powerful people really live. Of course, it’s disgraceful. Palpatine makes a specific point to let slip “lives are being bought and sold every day” before insincerely apologizing with a “I hope I did not raise old wounds by mentioning slavery.” He’s purposefully goading a reaction out of Anakin, and goading a kid to take the powerful down a peg is usually successful. When Palpatine gives Anakin a clear and easy target in the form of the gambling embezzler Senator Colandrus, Anakin dutifully takes the bait, and uses the force to turn one of the Senator’s rolls against him. I love how broadly Checchetto broadcasts this, almost as obviously as Palpatine is manipulating the young Skywalker. 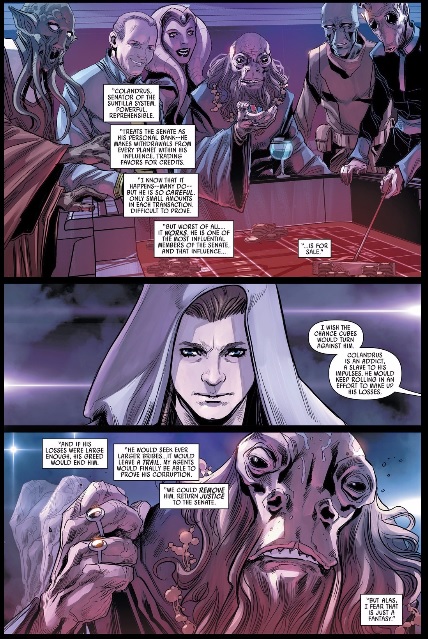 That dialogue from Palpatine in the second panel is almost more textual than subtextual, but Anakin’s too young and angry in this moment to tell the difference. As they walk out of the bar, Palpatine asks Anakin if he altered the roll of the cubes, but, like, obviously he did. It’s a first step toward connecting Anakin’s slavery and his distrust of authority, especially authority that does nothing to stop injustice and inequality.

In the present, the analogy is a little less compelling. Anakin is taken advantage of for his ability to put machines back together. He’s then taken against his will, so I guess the slavery metaphor should be a lot stronger, but I think it’s just harder to track the who and what of the real-time action. Spencer mentioned this in our write-up of issue 1, but it’s hard to track who’s Open and who’s Closed and what those characters names are. So quick, ask me which side kidnapped Anakin. Nope! Couldn’t tell you.

Taylor: Star Wars has always had a goofy streak to it. No I’m not talking about the prequels, even though one could argue all three of those are a comic farce. No, I’m talking about gags that actually occur in the Star Wars movies that most people consider good. In A New Hope you have Han running around a corner while chasing some stormtroopers, only to be confronted by an entire platoon. You have Threepio being told to “eat shit” in Empire. And of course you Han being called a “nerf herder” by Leia. Of these the last has always tickled me. I would call my friends this along with “scruffy looking” because it was weird and funny, just like in the movie.

In Star Wars 17 we finally get a glimpse of a nerf in a wacky adventure that Han and Luke have while trying to raise money for the Rebel Alliance. Since Han lost all of the Rebel’s money gambling, he and Luke have to take on some strange cargo and of course hijinks ensue.

This lighthearted and zany story line is fun and at no point does it feel like our heroes are in any danger. This stands in stark contrast to the main story of this issue which focuses on Leia and her attempts to survive what equivocates to a Space-Prison Riot. Leia does her best to act the good guy by refusing to shoot murderers let loose upon her and it’s hard not to cheer for her and her indomitable spirit here. The occasional cuts to Han and Luke and their misadventures hints at the fact that had Leia been with the boys and vice-versa, each scenario probably could have been avoided. This subtly hints at the idea that the real strength of our heroic rebels lies not in their individual talents but in their work as a team. Reflecting back on it, this is certainly true of the movies and I enjoy seeing this aspect of the films reflected here in issue 17.

Overall, while the issue does feel a little light I couldn’t help but enjoy it. For once it’s nice to see Leia, Han, and Luke exist in the Star Wars universe without having to save it. This not only makes me warm up to the characters even more and gives me a chance to truly enjoy the Star Wars universe for just how strange and magical it is. Han and Luke are certainly not in trouble this act of comic relief is a welcome sight in a universe that so frequently is serious and dangerous, and usually seriously in danger.