We try to stay up on what’s going on at Marvel, but we can’t always dig deep into every issue. The solution? Our weekly round-up of titles coming out of Marvel Comics. Today, we’re discussing Civil War II: Amazing Spider-Man 1, Daredevil 8, and Howard the Duck 8.

Drew: Early in this issue, writer Christos Gage draws a clear parallel between Ulysses precognitive visions and Spider-Man’s spider-sense. Spider-Man is quick to dismiss the similarities as superficial, but there’s no denying how similarly they function as a narrative device. Spider-sense senses immediate danger, goosing tension for a punch we know is coming (though perhaps not from where) over a page turn, but Ulysses’ visions extend that cliffhanger quality, creating something similar to the tension of spider-sense, but operating on a much longer time-scale — say, the release schedule of a four-part miniseries.

Obviously, that’s not the only trick Gage has up his sleeve — indeed, mining unexpected ideas out of these straightforward tie-ins is one of his greatest strengths as a writer — but it’s the one that most struck me about the structure of this issue. I was also struck by Travel Foreman’s etherial art, which fits Gage’s script in surprising ways. I’m so used to seeing Foreman on horror-related series, I’d never really considered his ability to pace a joke, but he’s a natural fit for Gage’s lighter tone. Indeed, their seemingly opposite sensibilities might just be what makes this collaboration feel so fresh.

It’s a solid first issue, and Gage leaves a lot of fascinating ideas on the table to play with. Foreman’s art alone is worth the trip, so you can be sure I’ll be back, but Gage’s hints at the manufacturing applications of precognitive abilities is enough to warrant a second look, as well.

Spencer: The question of what Matt Murdock did to get his secret identity back — and why he did it — has been the underlining question driving Charles Soule, Goran Sudzuka, and Matt Milla’s entire run of Daredevil. While Daredevil 8 doesn’t touch upon the “how,” it may do wonders to explain the “why,” or at least to explore the headspace that would compel Matt to make such a decision in the first place.

It’s such a simple concept, I’m surprised it’s never come up before — of course the “Man Without Fear” would get a thrill out of gambling, and of course someone with his powers would be an ace at it. With that dynamic established, much of this issue plays out as a bit of a heist/con-man story, and Sudzuka and Milla embrace that aesthetic fully. 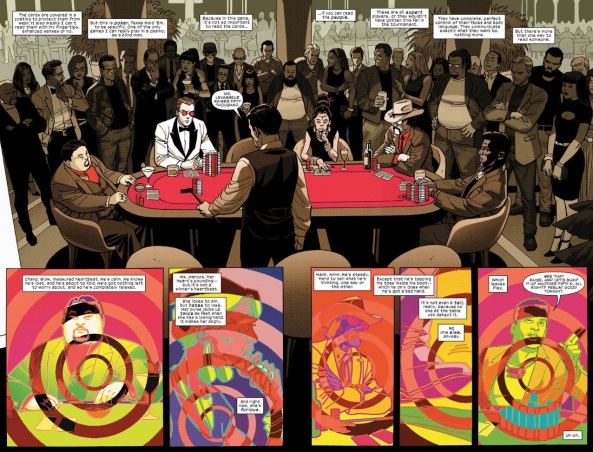 The colors of Matt’s radar vision may emphasize the extraordinary, superheroic aspects of the title, but the rest of the page embrace the class you’d expect to find in a typical high-stakes Poker Tournament — and, of course, Matt Murdock the daredevil makes himself stand out as the center of attention by wearing a white suit when everyone else is decked out in darker hues.

Soule digs into the meat of this story, though, when Matt does psychic battle with the casino’s telepath, Apex.

We come to find out that, even when Matt wins this tournament, he can’t cash the check because he registered under a fake name, and he actually came to Macau to help Spider-Man with a mission, meaning that he only signed up for this tournament (throwing down ten grand in the process) for the sheer thrill of winning it. Matt’s willing to risk everything he has for a thrill, because he feels compelled, like he has to. Mentioning Kirsten and Foggy here makes the link explicit; while Matt may be referring to the money he bet in the tournament, the same sentiment applies to whatever he did to regain his secret identity. As we get further into Daredevil, Matt’s decision seems more and more like a foolish, potentially even dangerous one.

Matt also never finishes his monologue in the scene above. If he doesn’t play, he’ll…what? Uncovering Matt’s fears here may in fact be the key to uncovering everything.

Patrick: It’s one of my favorite things in movies when characters explain themselves to their friends through flashback. There’s a sort of suspension of disbelief there that comes with the idea that the character flashing back applies of level of detail to their story that it’s as though everyone in the room watched the same four minutes of video. We just don’t tell stories the same way a film is made, but we accept that film is the medium these characters exist in, so their memories must also be film. The same is true of comics, and Chip Zdarsky and Joe Quinones play that suspension of disbelief for all it’s worth in Howard the Duck 8.

Howard has used his last punch on the Nexus of All Realities card to travel “home,” meaning to the home of his former adventuring companion and best friend Beverly. The cover of the issue sets expectations pretty explicitly, Howard and Bev’s dog, mournfully staring down a lighthouse on the Maine coast, with Bev’ likeness in the sky. The only extraneous copy on the cover reads “The Return of Bev!” so it’s obvious what we’re going to be getting here: a bitter-sweet reunion. But the first page is a charming revisit of Howard and Bev’s adventures, rendered with delightfully old time-y coloring techniques, and even using some designs that are too stupid and too sexist for modern comics.

This is unmistakably the past (look at Howard reading a newspaper!), but it sets a clear template for Bev and Howard to revisit over and over again as they dredge up their old issues. Hell, we return to this exact page, like three pages later, only now there are speech balloons revealing that Howard hasn’t been listening to his partner’s need for a simpler life. The issue is largely peaceful, but the spectre of their own adventures physically looms over them as Bev and Howard try to make sense of who they are to each other now. It’s a sad issue, but it expresses that sadness in a way only a comic book about a trouble-prone anthropomorphic duck could.