Drew: Last week, I saw a program of animated shorts at a local film festival. I’ve always loved shorts, but seeing a dozen back-to-back highlighted just how effectively vastly different worlds could be established in just a few short minutes. This is especially true of animation, where the “rules” of the world — from its physics to the question of whether animals can talk — can often take unexpected turns. Indeed, I think discovering those rules is one of the joys of cartooning; examples from the shorts I saw include “oh, this is a world where a crow in a shirt and tie might become a young boy’s step-father” and “oh, this is a world where someone’s bomb shelter might be at the top of an impossibly tall tower“. That’s a joy that’s just as true of comics, and creators that take full advantage of just how weird their worlds can be often come up with something magical and unexpected. Cecil Castellucci and Marley Zarcone are clearly willing to go weird in Shade, the Changing Girl, and issue 1 suggests that they might be on to something very special.

(Full disclosure: while I’m reasonably familiar with latter-day Vertigo [100 Bullets, Y: the Last Man, Fables, etc.] I’m woefully ignorant of some of the imprint’s foundational series. I’ve read Sandman and have been slowly acquainting myself with Hellblazer, but I’ve never read any of Peter Milligan’s Shade, the Changing Man. I bring that up because its not clear to me how much of this weirdness to credit to Castellucci and Zarcone, and how much is building upon the rules Milligan established over twenty years ago. Ultimately, whether these rules are being resurrected, invented, or re-invented doesn’t really matter to my reading experience, but I wanted to put my comments in context for any die-hard Shade fans who obviously have a different context — I may dwell on long-established facts that are new to me, and may gloss over new, exciting changes that I fail to pick up on in this strange new world. I’m new here; bear with me.)

The weirdness starts from page one, and piles up remarkably quickly. We open with an apparent metaphysical take-over of a comatose girls body. That’s a concept we can at least get our heads around, though it establishes some important questions: who was this girl, and what is this force taking over her body? Those are both key elements to the series, but before any of those can be addressed, I also have to ask what’s with the all of the animals? 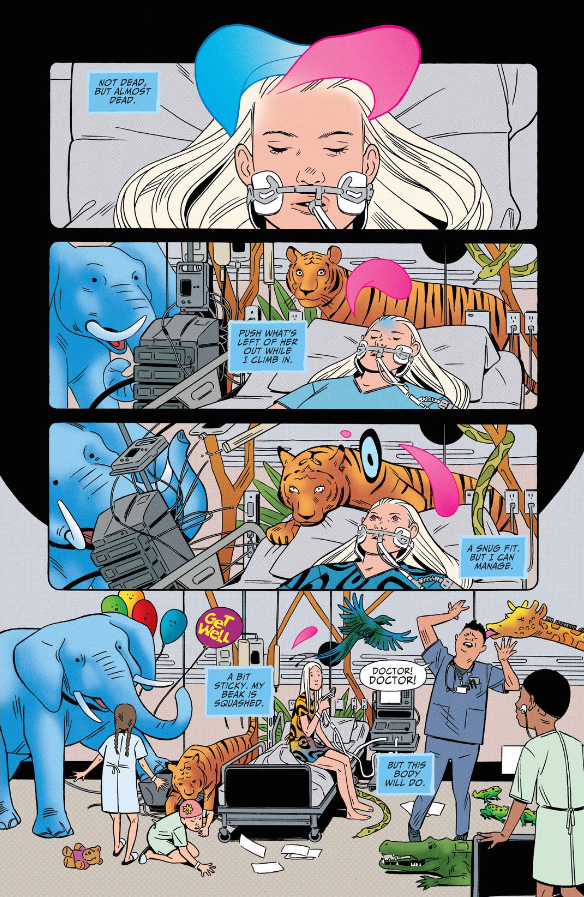 What is going on here? By the end of the sequence, the menagerie expands to include a few skeletons and a clown, all of whom seem to be physically engaging with their environments, toppling medical equipment, amusing children, and harassing orderlies. By the end of the issue, we have concrete answers to the origins of Shade’s mind and body — the mind is Loma, an alien obsessed with the original Shade; the body is Megan Boyer, a mean girl whose friends left her for dead after overdosing on pills — but these other oddities are never directly addressed, forcing a more metaphysical answer: they are manifestations of Madness, the force that allows Loma to posses Megan in the first place.

We don’t learn a whole lot about Madness, but we do get flashes of visions like this throughout the issue. I was particularly alarmed when Loma’s grip on reality seems to slip, turning the quaint Boyer family dinner into something much more macabre. 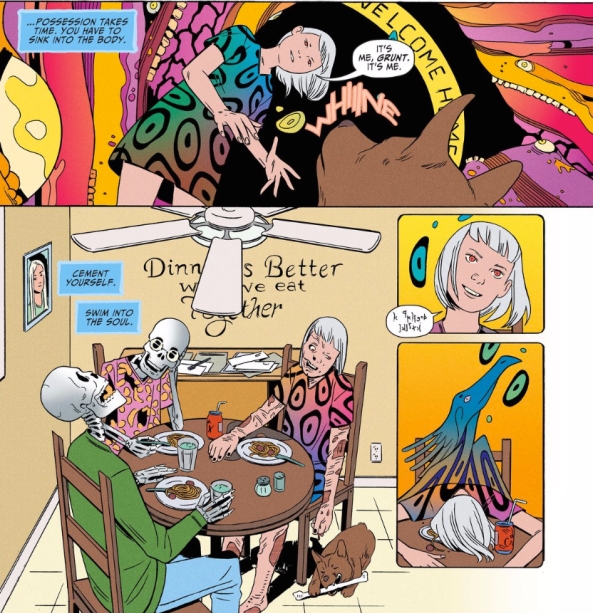 Loma’s relationship to Madness is clearly going to be a key source of tension as the series wears on — after this episode, she assures herself she’s in control — but I’m also curious how it affects the people around her. The patients and orderlies at the hospital seemed to see and feel the madness visions; do they manifest in real life, or can people just share in the visions?

Those questions may be central going forward, but this issue does a brilliant job of settling the questions of Loma and Megan’s respective lives. Megan’s “friends” are all nervous that she’ll remember what they did to her (she won’t), while Loma’s vaping boyfriend is fuming that she just used him to get to Rac Shade’s Madness vest. For all of the confusion about what’s going on with the metaphysics, it’s easy to overlook just how well-drawn those two lives are from just the few glimpses we get here, but we get just enough to flesh out the rest.

Oh, right: the Madness vest. This series clearly owes a debt to Milligan’s run, and Loma’s reverence of Shade might well stand in for Castellucci’s own. Body-snatching stories have themes of identity and attribution built in, but Castellucci has added even more wrinkles to that formula, having Loma actively trying to emulate Shade all while also trying to impersonate Megan. I suspect that’s a meta-commentary that will play even better to folks more familiar with Milligan’s run, but Castellucci’s respect for the source material is clear even to me.

Michael! This issue confused the hell out of me on my first read-through, but the more I think about it, the more I like it. Are you enjoying all of this weirdness, too?

Michael: Drew, I enjoy a healthy dose of weird in my comics so long as it doesn’t make the overall experience needlessly frustrating. And while there’s plenty of weird in Shade, the Changing Girl 1 I found myself understanding/enjoying it more than the only other “Young Animal” title thus far: Doom Patrol 1. In a way Shade, the Changing Girl 1 is playing on the sci-fi/fantasy high school metaphors that Buffy the Vampire Slayer did when it started out.

The basic idea of this book is “a creature from another dimension possesses the body of a teenage girl coma patient.” Without context this sounds like the premise for a sci-fi horror story, especially when the victim is a defenseless innocent like a teenage girl. As the issue progresses however we don’t feel as bad for Megan’s body being possessed by Loma because Megan was kind of a terrible person. As Drew pointed out, Megan’s mean girl clique is worried about her waking up because of their guilt about her coma. But I also think that they are just dreading the simple fact that Megan will be in their lives again. Similarly, the reaction that Megan’s parents have at the return of their daughter is sad and unsettling — they seem fucking scared. 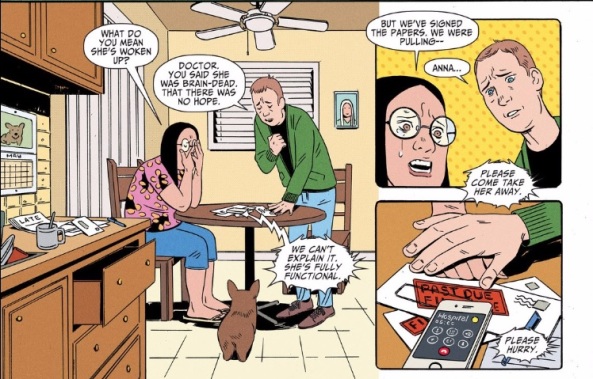 While we’re being honest here, I’m also a rookie when it comes to the world of Shade, the Changing Man. Sorry. But the collective apprehension of Megan’s “friends” and family leads me to speculate a bit and compare Megan: normal teenage monster, with the Madness: reality-bending sweater vest monster. When Loma’s not in control, the Madness warps reality around her and everyday life turns into a bit of a nightmare fest.

I’m really leaning into this “sci-fi as high school metaphor” thing but couldn’t the Madness’ reality distortions also be symbolic of Megan’s “awakening”? It’s been five months and the world that Megan knew has changed: her boyfriend is dating another friend of hers, the clique itself seems to be thriving and Megan’s parents have come to the difficult (?) decision to pull the plug and say goodbye to her. The specter of Megan returning to their lives has essentially shifted their reality, everything is changing again. Megan’s parents become skeletons at the dinner table — dead inside from feelings of guilt, fear, and probably overwhelming debt in medical bills. 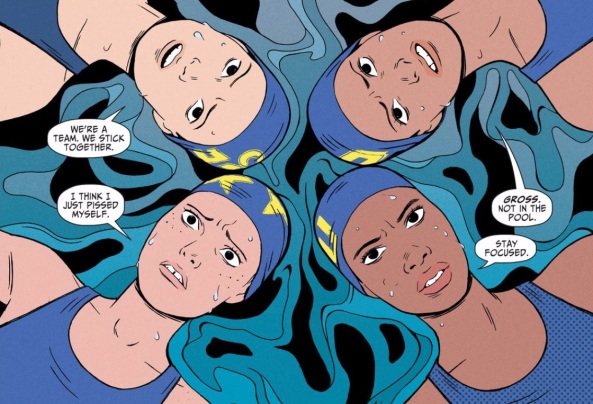 Maybe it’s because we’re very familiar with the “mean girl” stereotype or because we’ve personally seen groups like that in high school but these aspects of Shade, the Changing Girl 1 seemed to really speak to Drew and I. I really like the ideas of social power and group mind that Castellucci, Zarcone, and Hernandez explore here. The swim team clique is a hive and at one point Megan was a Queen Bee who ruled with fear. Though their Queen is gone Zarcone shows that the clique is still a hive mind in a panel that, for me, begged comparison to the “precogs” in the film Minority Report. Even if that wasn’t the intended reference, the way they are literally putting their heads together to plan a cover story is a great visual.

The last thing I’ll touch on is Loma herself. Another reason I don’t think that Shade, the Changing Girl 1 reads like a body-snatcher horror book is because Castellucci doesn’t write Loma as a threatening alien figure. She’s not inhabiting the body of a teenage girl in order to accomplish her evil agenda — as far as we know — she’s just trying to run away from her problems. Loma is the Meta version of the 20/30 something who doesn’t know what the hell she’s doing with her life so she looks to her favorite artists. It’s just in this case her favorite artist happened to be in possession of a reality-bending technicolor dreamcoat — er, vest.

4 comments on “Shade, the Changing Girl 1”