Spencer: On her twitter, Gail Simone recently discussed something she calls the “Batmobile Effect.” In short, it’s the exhilarating feeling a creator gets when they realize they’re working on a comic icon, on a character they grew up adoring and now, all of a sudden, are in charge of. That feeling right there describes much of the appeal of writing for Marvel or DC — the downside, of course, is that you never truly “own” a character. At the Big Two there’s only so much a writer can change a character because, when their run is over, it has to go right back into the “toy box” for another creator to use.

Howard the Duck 11 brings Chip Zdarsky and Joe Quinones’ run to an end, and the two show an exquisite understanding of how to handle a work-for-hire ending. Zdarsky and Quinones have truly made Howard their own, yet leave the character in better condition than when they found him, leaving the door open for future creators to try their hand at Howard as well. It’s a skill their in-story counterparts, Chipp and Jho, never quite grasp.

As to be expected, this is a remarkably meta issue, with quite a bit of its space devoted to jokes riffing on traditional comic book tropes, the industry itself, or even Zdarsky and Quinones’ friends.

Their take on Unbeatable Squirrel Girl scribe Ryan North hit me funniest, if only because his appearance so thoroughly revolves around the fact that he once wrote a page-by-page commentary on the (insane) Back to the Future movie novelization as opposed to any of his more notable achievements (or even his more notorious — I’m legitimately surprised Zdarsky didn’t sneak a reference to that time North got stuck in a hole in here somewhere).

But the meta-textual moments that truly sing are the ones that aren’t quite as obvious, nor the ones played as jokes. The way characters are treated by their creators is a serious theme of this issue, and one with life-or-death stakes for its cast, and Howard in particular.

The voice in the bright light — whoever it may be — is right when it states that, for comic book characters, death isn’t the end, it’s simply part of their cycle; it’d be more unusual if Howard didn’t die at some point. It’s not the most comforting sentiment to Howard, though — even if he accepts his death with a dignity and grace that often escaped him in life, it’s still a horrific tragedy for both him and his friends.

The morality behind killing a character is much different in Chipp and Jho’s universe — where the characters they write are actually, literally alive and can interact with them — than in ours, and what I ultimately get out of Howard the Duck 11 is that any creator needs to treat their characters with respect. It’s their responsibility to guide their stories to an ending that’s fulfilling and appropriate for the characters, genre, and tone.

Looking at things from that angle, Chipp’s crime wasn’t that he killed Howard, but that he let his frustration and temper override what was best for the story he’d been telling. He doesn’t seem to have liked Howard too much to begin with, and then he went and took Howard’s story and made it about himself.

As Scout reminds us, in work-for-hire, that’s not something you can do because the characters don’t belong to you; they’re just on loan.

It almost feels ironic that this message comes out of an issue that features the writer and artist themselves as characters within the narrative, but the differences between Chipp & Jho and Zdarsky & Quinones actually highlights just how good they are at telling Howard’s tale, and in this issue, specifically at bringing his journey to an end. Throughout this entire volume Howard’s been homesick, and tired of his life constantly being thrown into upheaval by superheroic activities. In the end, though, what Howard finally realizes is that he’s already home, and that the annoyances of his life have been worth it because they’ve led him to meet people who mean the world to him.

This is the moment Zdarsky and Quinones (aided by Jordan Gibson on colors) have been building up to throughout this entire volume; it’s an ending that brings everything full circle, shows personal growth, and respects the characters and the connections the readers have made with them. Seriously, I got a little misty-eyed at this point. I’m going to miss Howard and his friends.

Also, this ending leaves Howard better off than he was at the beginning of Zdarsky and Quinones’ run. The leader of the Sparkitects mentions that this whole thing has moved Howard from the D-List to the C-List, and while that’s a cynical way to look at it, making money and promoting characters as an asset is a priority for companies like Marvel and DC. Part of what makes Zdarsky and Quinones such successful storytellers is that they can integrate such goals into their stories — and even call themselves out on it — without ever sacrificing the integrity of the story. Zdarsky and Quinones treat their stories and their characters (besides Spider-Man) with respect, and that lets them get away with a lot.

Taylor! Are you as sad to see this book come to an end as I am? I really didn’t get to dig much into the issue’s jokes and cameos — where there any specific moments you enjoyed that I missed? Also, do you want Biggs the cat as much as I do? And I don’t mean a plush — I want Biggs himself, in all his robo-kitty glory. He wouldn’t have to tell me to rub his belly twice.

Taylor: Oh, I would have taken Biggs as a pet a long time ago if I had the choice. I mean, he’s a cyborg cat, what more could you possibly want? What I like even more about his role in this issue is that he basically saves the day when all else begins to fail. When Iron Punisher is on his rampage there’s basically little that any hero can do to stop him, even Spider-Man. However, it is the portly Biggs who steps up to the plate demanding belly rubs.

It makes sense that the Iron Punisher takes to Biggs. Just like him, Biggs is made (at least partially) out of steel so the Iron Punisher can at least relate to him on that level. More, Biggs is fat, and there is nothing cuter than a cuddly cat than a cuddly fat cat. Quinones’ art perfectly illustrates both of these points. As Biggs finds a glorious bit of sun, his belly and robo-parts are laid bare for the world to see. The icing on the of this scene is the bottom two panels which show the ridiculous size difference between Biggs and his new best friend. The Iron Punisher’s finger is about as big as Biggs himself which playfully illustrates the absurdity of such a powerful robot being subdued by a cat. I was a little sad to see Biggs replaced by Biggs-Prime at the end of this issue, but I guess you got to keep Howard’s gang together to it’s only a minor disappointment.

Aside from Biggs I got a kick out of Spider-Man in this issue. We’re also used to the corny jokes the friendly neighborhood hero is used to throwing around, but it’s rare that we see him the butt of so many jokes one after the other. 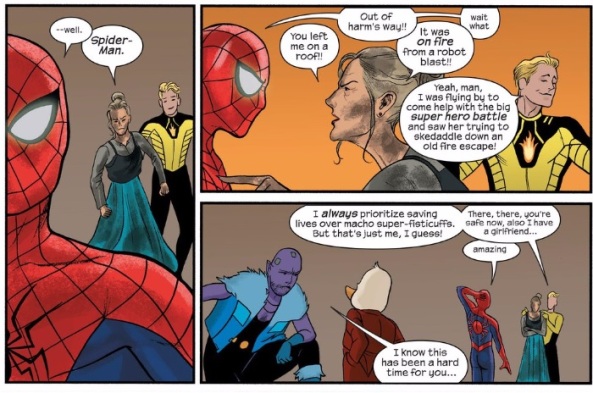 It would perhaps be unkind to call Spider-Man stupid in this issue, but hell if he isn’t just batting zero here. Not only does he fail to slow down the Iron Punisher, but whisks Aunt May in theory to protect her. The rub of this is that he sets her down on a burning building caused by the very danger he hoped to avoid. There’s nothing shocking about seeing Spider-Man as the butt of some jokes. Other writers have used him in the same role in their comics many times before. What makes him particularly funny in this instance is that he’s so earnest in his heroing. He badly wants to save the day but he fails at every turn. Adding salt to the wound is the fact that Johnny Storm, hardly a paragon for heroics himself, gets to rub Spidey’s shortcomings in his face by creepily coming-on to Aunt May.

Spencer, you did great job summarizing why this issue is a great meta-commentary on comic writing, but I want to also to also point out some of the other great ways Zdarsky and Quinones integrate their interests and values into the comic. Aside from the characters that are clearly named after them, it’s fun to see all of the pop-culture Easter eggs they drop throughout the issue. At one point Tara morphs into a cop who clearly is modelled after Judge Dredd. Ry-N is wearing the exact same outfit and using the same hoverboard Marty McFly uses in Back to the Future II. And even the lines that characters use reference the Matrix, like when Jho says “Not like this. Not like this.” Taken individually these are fun little homages to well known pop-culture mainstays. Taken together, however, and it becomes clear that the authors are making a point to tell us this is what influences them, this is what has made them the creators they are today. It’s a signature, of sorts, that just like the commentary about creating comic books, is interwoven into the narrative of the story seamlessly.

It should go without saying that I’ll also miss this particular run of Howard the Duck. Zdarsky and Quinones have managed to create a world that is totally unique in the Marvel-Verse – not an easy thing to do when you have editors breathing down your backs. That they were able to put such a personal stamp on a well-trodden intellectual property is a testament not only to the skill of these creators, but to the love they have for their craft and this book. So even though they may not own Howard the Duck, in many ways they have made him and his friends their own.