Mark: I’m an enormous fan of the Harry Potter books and movies, so I was super hyped leading up to the release of last year’s Fantasic Beasts and Where to Find Them. Written by J.K. Rowling herself, Fantastic Beasts promised to be another opportunity to immerse myself in a world I love. As the film worked its way through its first act, I found myself less than entranced; why should I care about any of these characters, other than the movie telling me I should? What is anyone’s motivation? But I watched hopefully. Once the exposition was out of the way, surely things would improve, right?. But slowly, as the rest of the film unspooled, a pit of melancholy grew in my stomach. This entertainment I was really looking forward to? It’s bad, and that’s a bummer.

I loved Tom King and Tim Seeley’s Grayson. While that book kind of lost the thread by the end, its first arc is near perfect. And while Seeley’s Nightwing run isn’t for me, I was looking forward to his Wonder Woman: Steve Trevor one-shot, which seemed like the perfect opportunity to showcase the wit and heart on display in the best of Grayson.

That hope kept me buoyed through the opening pages of the issue, where Steve is held hostage by a group of terrorist “meninists.” Everything’s a little on nose, yes (like Wonder Woman calling out the insect monster as the “out-of-control frothing red phallus” it [kind of] is), and nothing really makes much sense, sure (why is the phallus beast out and about in the first place?) but Steve Trevor taking on militarized men’s right activists is precisely the kind of crazy that I would have trusted Seeley to pull off deftly in Grayson.

Unfortunately, the further into the issue you get the more apparent it becomes that “on the nose” is the only mode in which Wonder Woman: Steve Trevor 1 operates. After Wonder Woman comes to Steve’s rescue, he’s off to Turkey to rescue a girl named Fatma from Saturna and the Crimson Men and escort her home. There’s some convoluted exposition as Steve hot air balloons into the country that ties into the recently released Wonder Woman film, but honestly, everything that happens here makes only the thinnest amount of sense.

What’s most frustrating is that because the issue is filled with useless information, the bits that are important are all but printed in bright red letters to help them stand out from the detritus, climaxing in this painfully awkward bit of exposition:

Yes, I too suppose you could be forgiven.

This is not a great comic book, and it was clearly assembled hastily to coincide with the theatrical release of the Wonder Woman film. Honestly, there’s no crime in a corporation making some quick money off of synergistic tie-ins, but trying to dissect the results for deeper meaning is a futile exercise.

Patrick: Honestly, I feel like I could have done with even more on-the-nose references MRAs and alt-right assholes. This issue ends up splitting its time between making a new statement about the state of the world and Steve Trevor’s place in it and that kind of clumsy movie tie-in Mark mentioned above. The Oddfellows absolutely clutter an issue that’s already full-to-bursting characters and concepts that need room to breathe. Their inclusion here does make it hard to discuss the actual themes being presented here — some of which are very interesting. 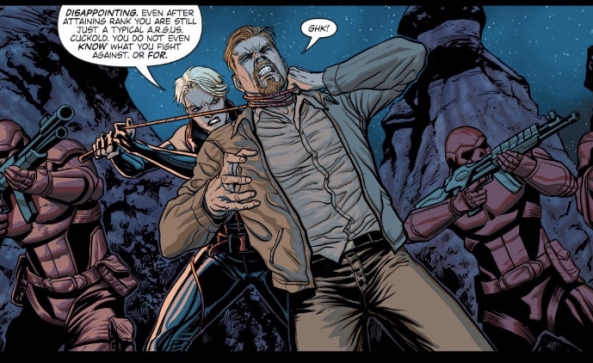 Obviously, that’s a loaded image. The rope calls to mind Diana’s lasso, but the choking imagery is kind of the reverse of the abusive trope with the woman here choking the man. Artist Christian Duce is playing with a full deck here, and Seeley gives the whole scene a little extra gas with the ol’ C word there, but doesn’t quite stick the rhetorical landing. We’re no strangers to modern politics (and social issues) in super hero comics — we’ve spilled more positive digital ink about Hydra Cap than just about any website I know — and I just wish this team had the courage to make their message either more focused or more explicit. Steve’s rationale for not turning the immortal children of the Turkish stream over to A.R.G.U.S. actually does speak more to his emotional weakness than the strength of his empathy. He feels guilty for exposing one paradise to the world of men and that’s why he won’t expose a second.

It’s a subtle misunderstanding of what’s so great about Trevor as a character, and by extension, what’s so great about Wonder Woman. They’re not driven by their weaknesses but by the strength of their kindness and the depth of their empathy. It’s a minor point that I’m harping on here, but I think that’s part of what Mark is responding to above: the themes resonate a little less because they’re just off. If Diana and Steve’s first mission in the issue had been one where she demonstrated empathy in an unintuitive or challenging way, modeling it for Steve to use at the end of the issue, that would have made a lot more sense. And made both of them more heroic.

But, that’s enough about what could have been in the issue (we’re not in the business of re-writing comics) — let’s talk about some things that really did work. I loved Steve and Diana’s relationship in this thing. There’s such a warm, worn understanding between them. Steve has his secrets and Diana does not press him for details, as in this scene.

They’re both intensely vulnerable with each other in this moment. Steve recognizes that Diana could always get the information she wants by simply plying the tools of her trade. Duce emphasizes this moment of awkwardness by staging the first and second panels almost identically, save for Trevor’s hands fumbling with the phone. Of course, all is well in the final panel, and honesty and vulnerability are rewarded with an embrace and a kiss. I mean, a forehead-kiss, but a kiss nonetheless.

I mean, f’real: if anyone’s dick looks like this, you should see a doctor.