Writer Gerry Duggan has made me recognize Deadpool as a (misguided) hero with heart. So when Hydra’s new America debuted in Secret Empire, I was shocked that Deadpool was working for the bad guys. Deadpool 31 showed us that Wade’s idolization of Captain America put him down this path. In Deadpool 32 he’s struggling with the guilt of that choice.

Deadpool has officially joined up with the ranks of Hydra, but that doesn’t mean that he’s going around spouting their tentacled-rhetoric. When he’s working for the bad guys Deadpool is still Deadpool: he quips as he fights Speedball, he thinks of any way not to say “Hail Hydra,” and tries to be the best father he can.

Duggan writes Deadpool as a superhero sellout who’s traded up with the bad guys for a comfortable life — specifically for his daughter Ellie. Wade’s the dad who’s moved to a new city for his job and his kid is not adjusting well at school; mostly because Ellie is smart and her school is evil. 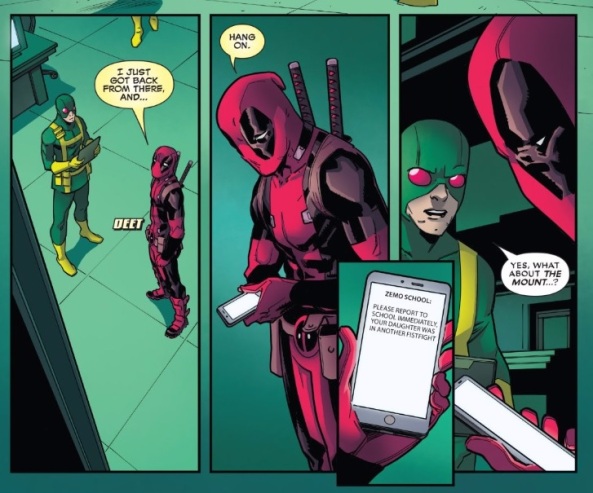 Wade is clocking in at Hydra HQ daily, having guilty nightmares about killing Phil Coulson and is fully prepared to hand over the location of Hawkeye’s resistance. The only reason he doesn’t is that he receives a text from Ellie’s school about her getting in another fight. Wade could probably keep on pretending to not mind working for Hydra but Ellie’s happiness is more important.

Artist Matteo Lolli emphasizes both Wade’s remorse and his devotion to Ellie in that first spread. Besides a shrub and an empty bottle, their apartment is mostly bare. Wade isn’t sleeping on the couch as a kooky Deadpool preference, it’s because he gave the bed to his daughter. Idolizing Cap is what got Wade into this mess. Loving his daughter is what’s getting him out.