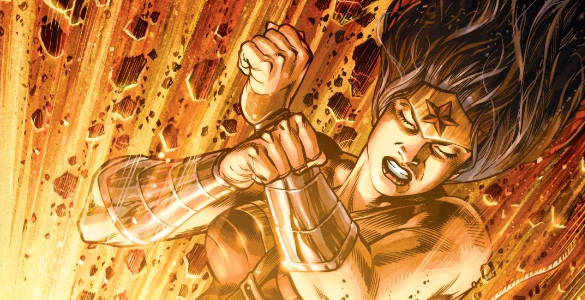 Servitude is a crucial part of the soldier’s identity. They don’t just fight for abstract concepts like truth, and justice and the American way, but so the people they serve can experience those abstractions. There’s a virtue in that sacrifice, but it remains a sacrifice. Perhaps more than most superheroes, Wonder Woman is a traditional soldier, trained in both the art and etiquette of war, but her sacrifice has always been a bit ill-defined. She gives up paradise, but only so her fellow Amazons can continue to experience it. Writer Shea Fontana finds a new angle on Wonder Woman’s sacrifice in Wonder Woman 26: Diana’s childhood.

The key to this sacrifice is Diana’s doll, ‘Gapie. The Wee Child Diana loves that doll, dragging it around her mother’s wine night. Of course, Diana can’t stay up late with the adults, so Hippolyta takes her off to bed with ‘Gapie in tow. ‘Gapie is the quintessential symbol of childhood innocence, offering kisses to everyone, and dutifully standing guard over Diana’s bed when she gets up for a glass of water.

On her way back down to the pantry, Diana hears her mother’s friends’ comments about her doll. She is destined to be this great warrior, and shouldn’t be wasting her time with such childish things. That would seem true, save for the fact that this kid is a kid. A KID. And she finds genuine joy playing with this thing. Even at this early age, Diana has the steely resolve to lock ‘Gapie in a box, effectively ending her own childhood. There’s the sacrifice.

As we see in the first and final pages of this issue, that’s one of the things Diana fights to protect — the ability of others to enjoy their childhoods. The panel that takes us out of the UN Refuge Camp is Diana’s boot blocking a doll from an advancing explosion.

This is sort of the obvious version of the parallel that Fontana and artist Mirka Andolfo draw at the end of the issue. Diana is at Etta’s brother’s wedding and at first it seems like Wonder Woman can’t turn off her warrior’s brain long enough to enjoy the party. It quickly becomes clear that she just needs a like-minded individual to roll around the reception with her. She’s a little girl named Destiny. Helping the child find her shoe gives Wondy purpose at this event. It also leads her to a bomb — which, of course it does — but for a moment, there’s amazing clarity to both Wonder Woman’s sacrifice and her purpose.