For better or for worse, America 10 brings all of the series’ developments thus far to a climax. Writer Gabby Rivera’s (assisted on art by Flaviano and Jen Bartel) attempts to find roles for the majority of America’s allies makes the issue feel overcrowded, especially since most of their efforts don’t really play a role in America’s victory, but her further exploration of the racial and cultural conflict between America and Oubliette (which I first talked about when covering issue 8) is far more successful. Rivera has a message she wants to get across, and it makes this issue feel focused and vital in a way the rest of this storyline sometimes hasn’t.

The idea that Oubliette the Exterminatrix represents the most ruthless and racist aspects of capitalism is only made more clear in America 10, as Oubliette flat-out states that she plans to not only steal America’s ancestral power and make it her own, but to ferret out all the ancestral spaces she can and do the same. She’s looking to cash in on, and wipe out, entire cultures in order to bolster her own wealth, already built on the exploitation of others in the first place. Oubliette only sees America’s heritage as something she can exploit, not understanding how deeply it informs who she is.

America describes her ancestral power as something that “lies beyond [Oubliette’s] comprehension,” which “transcends everything [she] could possibly know of reality.” I’m reminded of cultural appropriation, which often misuses or monetizes sacred and holy traditions without understanding or caring about their true meaning, and thankfully, America is able to channel this power Oubliette can’t even begin to fathom to achieve victory.

America wins because she understands her own worth and the significance of her heritage; her past informs who she is and gives her strength she can always rely on. It’s not the actual abilities, but the history behind them that empowers America, and that’s why the Exterminatrix’s attempts to steal them away was always doomed.

Rivera touches on another all-too relevant point with the Sotomayor students who decide to support Oubliette/Billie instead of America. 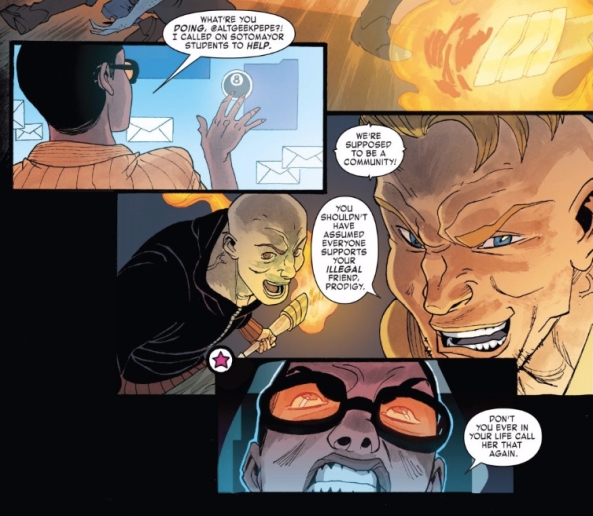 A group of young white men and women (with “alt” and “pepe” in their online handles) armed with tiki torches, rallying against a person of color who they deem “illegal” and blame for stealing control of their school away from them? I shouldn’t even need to explain the significance of this. Rivera and her collaborators seem to find great joy in showing how pathetic and backwards these kids truly are, but they also help to illustrate something further about the Exterminatrix. She doesn’t just want to steal America’s power because she’s greedy, but because she views people like America (people of color, poor people, etc.) as lesser than her, as “underserving” of having any sort of power of prominence. It’s a sick, false idea that must be fought at all costs, and America is the perfect hero to do so.