It might be stating the obvious to suggest that the Hulk’s identity is fraught, but I don’t mean it in the Jungian dualistic sense. Obviously, the tension between Bruce Banner and the Hulk is the primary source of drama for the character, but the Hulk has long suffered from a different kind of identity crisis, in that no two writers ever seem to agree on who and what he is. Is he a senseless destructive force, or is he capable of reason? Is he a monosyllabic brute, or a brilliant physicist? I’ve only occasionally checked in on Hulk’s solo series over the past five or so years, and I’ve seen takes that pretty much run the gamut, if that’s any indication of how rapidly and wildly consecutive runs can change the character. And to be clear, I don’t necessarily see this as a weakness — I’d argue that the flexibility of superheroes to fit the themes different creative teams are most interested in exploring is a huge part of their longevity — but I do think it demands a strong statement of purpose at the start of a run; something to clarify exactly what kind of Hulk we should expect to see. Something like Al Ewing and Joe Bennett’s The Immortal Hulk 1, which introduces the specifics of this particular iteration with remarkable efficiency.

Ewing primes us for the themes of this issue with an epigraph from Jung and some uncredited, apparently omniscient narration riffing on the notion of identity and dualism. Meanwhile, we’re introduced to a world where the Hulk being alive is regarded as tabloid nonsense, with all the credibility of other blurrily-photographed “monster” sightings. So when a botched robbery leaves three people dead, we’re left with those dualism themes echoing in our minds and nobody to apply them to other than the robber-turned-murderer. He’s in deep with a local crime boss demanding repayment for a loan, so the robbery was a real act of desperation, and it going sideways was a testament to his inexperience. Immediately, we have a picture of who this guy is, who these gangsters are, and how hopeless the police investigation already seems to be.

But then, out of the shadows, emerges the Hulk. He effectively rains justice down upon the gangsters and (eventually) the robber, but he doesn’t seem particularly interested in justice. And not in that “senseless destructive force” way, but in a decidedly Mr. Hyde kind of way. He does name the robber’s first victim, reminding us that she was only twelve years old, but then he asks an unexpected question: 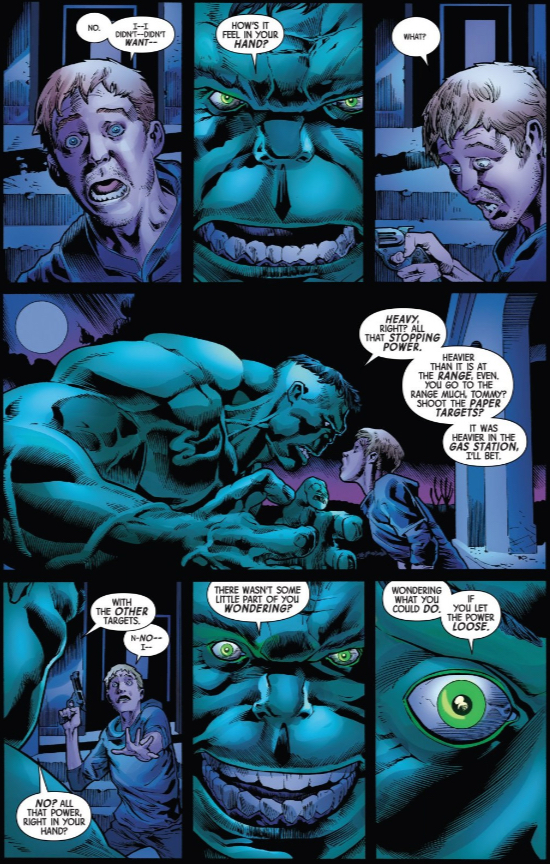 He’s toying with this guy. He’s turned the conversation to power while having this kind of subtextual power play, becoming somehow more menacing than simple unstoppable brute force. That brute force eventually comes, of course, but not before forcing this guy to confront whether or not he’s actually a decent person (and whether or not he’s deserving of the just deserts Hulk is dishing out). It’s Hulk with a head game, which is such a delightfully weird concept, I can’t help but be intrigued.

It helps that the art team can back up those themes with genuine creepiness. Bennet’s framing of the Hulk never fails to make him an overwhelmingly imposing figure, but the atmospheric inks and colors from Ruy José and Paul Mounts, respectively, put the art over the top. The climax of the issue is lit only by the moon, making the colors almost exclusively purples and greens, casting the sequence in an unsettling, otherworldly pall. It’s the kind of horror approach I’d often heard about for the Hulk (but never seen), and combined with Ewing’s idiosyncratic, pulpy take on the character, it makes for something truly unique.