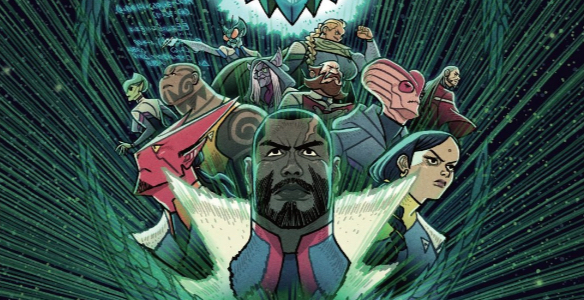 Space: the final frontier. These are the voyages of the starship Enterprise. Its five-year mission: to explore strange new worlds. To seek out new life and new civilizations. To boldly go where no man has gone before!

Not a lot of fiction gives you a mission statement quite as clearly as Star Trek. In just a few sentences (and fragments), the opening credits establish the where, what, and why of what of an entire universe, providing fuel for decades of new iterations and reimaginings. The mission statement for Outer Darkness is a bit more complicated, building on what writer John Layman calls “dramas set on spaceships” (in the grand tradition of Star Trek), while also folding in “outer space sci-fi horror,” for which he has charmingly few examples. The result is something obviously more difficult to pin down than that clear logline of Star Trek, but while this issue doesn’t quite cover its entire mission, it absolutely articulates its storytelling sensibilities, as Layman and artist Afu Chan make some distinctive choices to broadcast their tone. END_OF_DOCUMENT_TOKEN_TO_BE_REPLACED