Scott: The other night I just could not get to sleep. I was lying awake restlessly, my mind racing through any number of thoughts until the desire to know what year a certain Guided By Voices album came out was nagging at me so much that I convinced myself to open my computer and look it up. 40 minutes later I found myself on John Woo’s Wikipedia page and decided it was time to call it a night once and for all. Dick Grayson is having one of those restless nights, but instead of GBV’s chronology, what’s nagging at him is Gotham’s lack of gang activity — the city is too quiet for him to sleep easy. The sequence of events that follows is something like a night spent with Google and Wikipedia: a bunch of tangentially related bits and pieces — some very intriguing, others merely dead ends — that by the end has you wondering what you’ve really learned.

The issue begins with Dick telling us that the Joker is back in Gotham, which usually means an increase in crime around the city, but tonight the streets are quiet. Dick knows this can’t actually be a good thing. Unable to find any leads or reach Batman or Alfred, Dick puts the Nightwing costume on and goes to get some answers from the Penguin at the Iceberg Casino. Penguin gives Dick the alarming news that Lady Shiva is heading back to Gotham, and Dick knows it is up to him to deal with this threat while Batman and the police are occupied with the Joker. In the morning, Dick goes to check on the progress of his circus and is interrupted by Sonia Branch, who has some papers for him to sign and asks him to meet her later for what may or may not be a date, although she has to cancel in favor of more pressing business with a sniffling bank auditor.

Dick heads out for the night and runs into Batgirl, who’s solely focused on making the Joker pay and can’t understand why Dick’s priorities are any different. Dick goes undercover to get a tip from thug Handsome Johnny; smalltime mobster Chipper Panoicia is planning to take out Lady Shiva when she arrives in Gotham that night. Of course, Dick can’t let this happen, so he’s left with the dangerous task of stopping a bunch of hitmen from shooting the assassin that he’s trying to catch. But Lady Shiva is way ahead of them, she’s not even on the boat, she’s off intercepting the briefcase of that sniffling bank auditor.

My immediate response to this issue was that just feels busy. I was interested in Dick’s pursuit of Lady Shiva, but after stops with the Penguin, the Circus, Sonia Branch, Batgirl, and Handsome Johnny, I started to wonder if we ever going to get to Lady Shiva. I realize now, or at least I hope, that the little bit of progress that guest writer Tom DeFalco gives us in each of these scenes is laying the groundwork for a big payoff down the road. I expect whatever’s happening with Sonia to have major consequences in upcoming issues, and I can see Dick’s conflict with Batgirl coming back into play as well.

The issue started to pick up steam once it became more focused on Lady Shiva. I really liked the concept of Dick risking his life to save Lady Shiva from Chipper’s gunmen. Even Dick saw the humor in that.

To be honest, I expected a little more from guest penciller Andres Guinaldo. Nightwing is known for featuring some rather creative layouts, but the design in this issue was very straightforward. Maybe that’s just Guinaldo’s style, but it would have been nice to see him use this opportunity to take some risks and have a little fun putting panels together. The panel showing Dick turning off the E.M.P. mask was a great idea and well-composed, but it felt like a missed opportunity. The face-morphing happens so quickly and with so little detail that instead of seeming like a high-tech gadget it just feels too-convenient, like magic.

The most effective work came on the last page, as Dick’s inner-monologue wondering about the whereabouts and motives of Lady Shiva are accompanied by images of Lady Shiva cutting the throat of the bank auditor in a dark alley and making off with his briefcase.

Ultimately, I don’t think we can fairly judge this issue until we see how all of the pieces come together in the coming months. I have a few predictions: Dick seemed to see something of himself in little Christina, which can’t bode well for her circus-performer parents, and there was something fishy about Sonia’s assistant, Melody Martin, and her eagerness to “drop by” Dick’s place. She really sent a Shiva down my spine, if you know what I mean. But I’m interested to see how it all plays out. What do you think, Shelby, is this issue setting the table for something spectacular, or is it a whole lot of nothing?

Shelby: This issue may be setting up something big, but I don’t know if I’m interested in waiting around for it. You are 100% correct about the frenetic pace of this story. Adding to the busyness of the plot is the busyness of the pages themselves. DeFalco commits the cardinal sin of too much exposition. I don’t need a dozen boxes on each page outlining Dick’s every thought. I don’t know how many times I need to say show, not tell makes for more interesting and nuanced storytelling; I guess as long as writers insist on burying the story in exposition.

I also do not care for DeFalco’s take on Dick and Babs. Maybe it’s the excessive inner monologue, but Dick just strikes me as an idiot. The worst is when Sonia tells him she’ll stop by later to pickup the paperwork. His (inner) response is, “Is this just a business dinner or…? Talk about confusing!” Last I checked, Dick was a grown-ass man, not some ‘tween with a crush. Plus, at this point, he’s got the Joker AND Lady Shiva in town, plus troubles with this massive business he’s constructing; I don’t believe that his primary concern at the moment is “does she like me, or LIKE like me?”

As far as Barbara goes, it’s true, she is direct, single-minded, and driven. In DeFalco’s hands, though, she just seems cold and kind of bitchy. Maybe it’s because of some event I don’t know about, as this issue inexplicably takes place after next month’s issue of Batgirl. 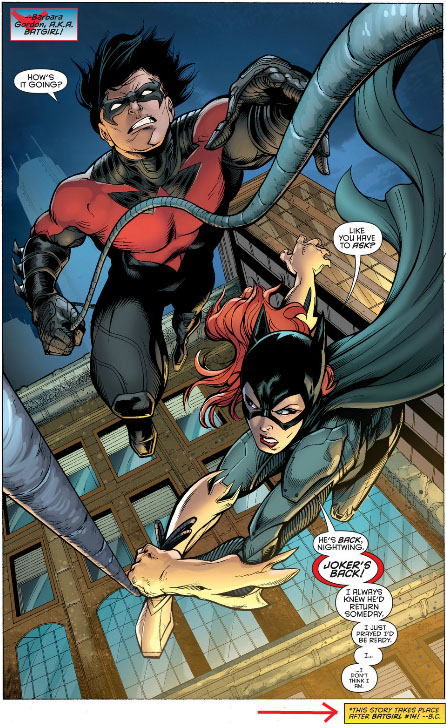 I have a hard time wrapping my head around this one. Batgirl 13 was last week, so there are two issues of Batgirl (14 and the annual) that have to occur before this issue of Nightwing. Assuming the rest of the Batman timeline is happening in approximately release order, we also have a Batman Inc, a Batman, and a Batman and Robin, all which happen before this one. That’s confusing, right? Also, why would you write it like that? Generally, editor’s notes like this one reference something from a previous issue, so potential new readers can go back and find what they’re missing. I can’t “go back” to read Batgirl 14, so what’s the point? If I’m missing something blatantly obvious about the way time is progressing in this story, please someone let me know in the comments.

This issue was a big miss for me. Between angry Babs and Dick’s excessive exposition, I was kind of bored and frustrated with it. I’m obviously going to keep reading, because of Death of the Family and because Kyle Higgins will be back on it sometime. Unless DeFalco proves to be setting up something awesome as Scott thought, it’s going to be a rough couple of months on this one.