Patrick: Why do we read comic books? Yes, I’d like to begin this write-up with a question so abstract. I ask because sometimes the answer isn’t readily apparent. Some of the comics we read are revolutionary — expressing incredible themes and concepts in exciting ways. But I’m not a total snob: I’m just as happy with simpler pleasures. Adventures are fun, characters are iconic, art is compelling. It’s a magic spell that’s been successfully cast on me time and time again. Birds of Prey may have dropped a few steps from those early issues we loved, but the spell shouldn’t have worn off entirely. Right?

This issue takes its cues from the later half of issue 13, so Condor narrates the thing. “Who’s Condor?” This is a question you might find yourself asking both before and after reading this issue. Here’s what he know: he stole Katana’s Soul Taker sword for the Dagger ninja clan. This issue teaches us that he’s more than happy to offer up the sword when the Birds effectively kick his ass. He’s also got telekinetic powers. Those powers come in handy when the Daggers come after the Birds of Prey and decide that the name “Condor” is criteria enough to attack him too. Because it’s a team book, they work together (though, Batgirl does surprisingly little) to escape the Dagger attack and then Condor uses his own powers to escape from the Birds.

Oh and all the while, there’s that persistent countdown.

This too is a carry-over from the previous issue. Maybe I’m old fashioned, but I sorta feel like an issue that starts with a countdown should end with that countdown reaching zero. But if I can’t have that, I need to have some sort of context for what happens when that counter reaches zero. I mean, “detonation” could be anything. But we’re in Japan, where none of the Birds have anything that they care about and therefore wouldn’t be all that broken up about anything being detonated. It’s the worst kind of ploy to mindlessly tempt the reader back for the next installment. The characters aren’t even aware of this countdown, why should we be?

I also find it confusing that Duane Swierczsnski would introduce another sorta-team-member when his grasp on the existing characters’ voices fades with every passing issue. Starling and Batgirl have such distinct voices and we’ve seen him write them both very well in the past. He’s even squeezed some personality out of Dinah and Katana. But he feels like a different writer, no longer as assured of the voices he’s writing in. Here’s a pretty good example — Batgirl is a self-deprecating, but endlessly clever person. So, when she makes the effort to say something, it’s a comment simultaneously insightful and funny, with a hint of resolved sadness. That’s Barbara Gordon at her best. Here she is in Birds of Prey 14:

This isn’t bad superhero quipping, but it is pointless. For a series that relies so heavily on the personality of its characters, Birds of Prey can’t really afford to paint Barbara Gordon in such a boring way.

I also wanna talk about Condor, as an invention of this series. STANDARD DISCLAIMER: I don’t recognize this character but I did a little Googling and I’m pretty sure he’s new. But, y’know, 80 years of publishing history — I don’t know everything. So I’m functioning under the assumption that this is a new character. Also, he just feels like a new character — and that’s not to his credit. There’s no sense of history or personality to Condor, but I understand where that might be a tall order for an original character. Swierczynski proved himself capable of writing a fully-realized brand-new character in the form of Starling. And Ev’s a triple threat: she looks cool, she’s got a great voice, and her skill-set makes for fun storytelling. Using that same rubric, Condor scores pretty low. 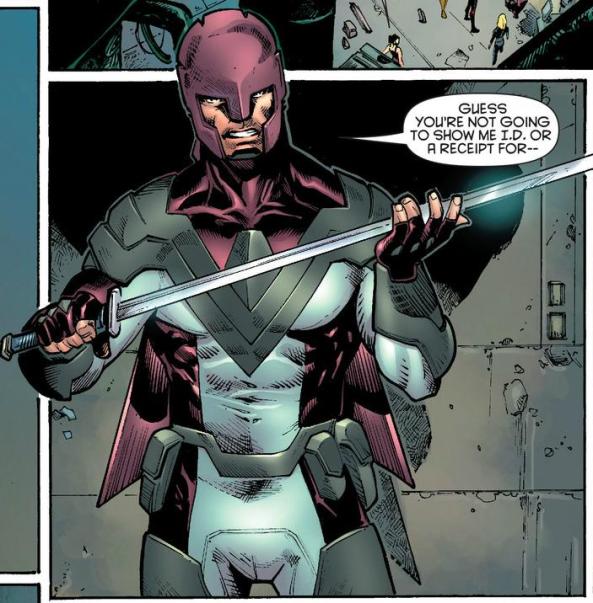 So what is there to latch on to in this issue? It’s not a mess. There’s nothing stupid about the story and artist Romano Molenaar depicts the action with relative clarity. Even that warehouse invasion splash page seems like it should be pretty exciting. But we’ve seen this team come up against so many more interesting conflicts (remember when Poison Ivy threatened to KILL EVERYTHING if they didn’t do her bidding?) and all of those conflicts have fizzled into nothing. Early in the run, the characters and storytelling were so strong that we were able to overlook Swierczynski’s inability to stick the landing. But given the series’ track record, I wouldn’t be surprised if we never see this much-hyped “detonation.”

Mik, have I got it all wrong? Is Condor the new Batman? Maybe I’ve got my guard up from the last couple months of reading this series. And maybe Starling’s phone call just triggered by Waller-fatigue. Do you find something solid to latch on to here or is it starting to feel like a slog to you too?

Mikyzptlk: Is Condor the new Batman? No, he isn’t. I’m not even sure he’s the new (insert D-List character here). I don’t even care enough about this character to insult him properly. That general feeling of disinterest seems to have permeated my entire opinion of this book of late. Like you, Patrick, I was interested in the adventures of the Birds of Prey when the book first began, but it seems that since Pamela Isley left, Swierczsnski has lost some creative steam. I completely agree with you on this one Patrick. This issue really isn’t terrible. I mean, you could certainly do a lot worse with DC’s recent releases. So, was is it about this issue of Birds that keeps it from being both terrible and good?

I think the problem we have here is that even though a competent story is being told, everything just seems to fall flat. The fact that the characters don’t even know about the looming “detonation” is the biggest example of this flatness. It’s like you said, Patrick, the characters aren’t even aware of it so why should we be? The fact that they don’t know about it completely deflates any tension that could possibly exist. Are micro-bombs secretly implanted in the back of the Birds necks or is that this “detonation” is referring to the eventual bomb of Ann Nocenti’s Catwoman? Okay, probably but, but the point is that it doesn’t matter. Ever since Poison Ivy left, most of Swierczsnki’s new elements all feel kind of pointless in this way. Who is the mysterious Condor? Who cares? This character could be interesting if we actually knew something about him but he isn’t anywhere near interesting as is. The fact that he uses a flight suit but actually has a superpower isn’t all that cool. Nor is his super ability all that interesting either. This character is such a joke that even Swiercznski’s other characters make fun of him.

Also, this joke doesn’t really make much sense to me. Hey, Black Canary, are you making fun of this guy for theming himself after a bird? Aren’t you kind of doing the same thing? Maybe one should not blast sonic cries in glass houses hmm?

To be completely fair, not all of Swiercyznki’s new elements are completely boring necessarily. I mean, I suppose that the Dagger clan isn’t all that terrible, but when we were just introduced to the muther-lovin’ COURT OF OWLS does anyone really care? With them so fresh in my mind, the Daggers really don’t match up. Similarly, near the end of the issue, we are shown the following scene.

What exactly is going on with Black Canary here? The actions really don’t make it clear. What is clear, however, is that whatever is happening has happened before and will probably happen again. Will this new element be the shot in the arm for this book or will Swiercynzki continue to disappoint? I certainly wish for the former but these last few issues make me think otherwise.