Patrick: “…if we don’t play by no rules… losing is fucking impossible.” We’ve mulled over where Eddie Blake’s nihilism comes from. Is it just something in the way his mind works or is it the product of his time and circumstance? Is it a philosophy he came to on his own, or was it forced on him by tragedy and suffering? Is an agent capable of setting history into motion or a product of that history?

This issue effectively follows up on the two cliff-hangers from the previous issue. Last we saw them, Eddie had tackled Benway out of a helicopter, stranding them both out in the jungle. As they struggle to survive, Benway teases the details of the recent village massacre out of Eddie. But the details aren’t surprising — they’re merely routinely horrifying. When Eddie and Benway are set upon by Viet Cong, Eddie snaps into self-proclaimed superhero mode and dispatches their attackers. Just as helicopter rescue is within their sights, Benway takes a bullet to the head and dies, leaving the Comedian to fight another day.

In an epilogue (of sorts), a report — submitted to CIA Deputy Chief in Saigon, William Colby — is intercepted by by Richard Nixon’s campaign team. The report is decidedly ambiguous toward Blake’s brutal methods in the war (to summarize it’s text perfectly: “he’s a maniac, but he’s our maniac”). Realizing the devastating effect this report could have on The Comedian and his allies, Nixon’s cronies send a copy of the report to Bobby Kennedy.

Blake is coming to represent the American military in Vietnam, particularly in the wake of the Tet Offensive. A quick, sloppy history lesson: in January, 1968, the Viet Cong and the North Vietnamese broke a two-day cease-fire by attacking American and Southern Vietnamese forces in alarming numbers. The US response was brutal as fuck, essentially taking a scorched-Earth approach, leveling entire villages. This marked a turning point for public opinion about the war, which had previously been largely positive.

Brian Azzarello explores a lot of what’s messy about this, attributing American military savagery to a number of factors: drugs, mania, desperation. Mind you, these myriad factors make themselves manifest in one dude: Edward Blake. Eddie’s struggle with the morality of this war is over – whatever damage it was going to do to him has been done and now, he’s an elemental force to be embraced or rejected by the soldiers around him. We see the push-back even within his own unit as Moose rejects the Comedian philosophy, taking his own life instead of subscribing to the “patriotism” as set forth by Eddie’s kill-em-all manifesto. 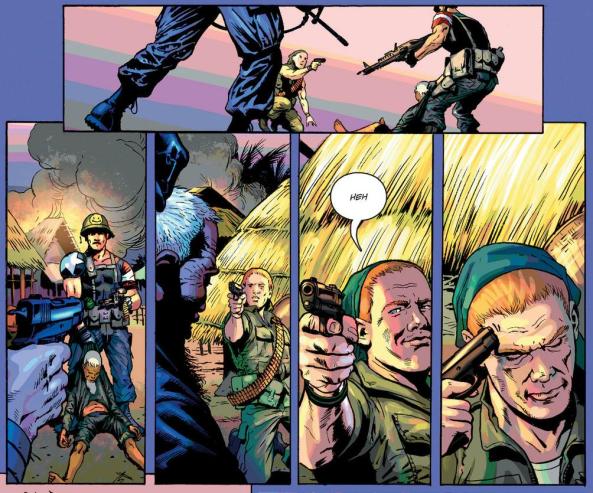 Now, it’s a little unsettling to see this kind of attack perpetrated by a fictional character. We know that villages were destroyed — in real life — and horrible acts were committed by American soldiers in the name of patriotism, in the name of desperation, in the name of frustration. Much like Eddie’s role inciting the Watts Riots in issue 3, this story takes the agency behind the people that participated in these events and places it in the hands of a madman. It’s unsettling: the suggestion that there’s an implied nihilistic maniac guiding history. Perhaps it’s more telling that said maniac doesn’t seem out of place in our own REAL LIFE history.

Okay, so what’s that all mean for what’s happening in comic book? We placed the events of the previous issue in mid-to-late March, 1968. RFK will be assassinated in a few short months, on June 6th of the same year (which we know because we get to cheat by using history). What’s Nixon’s plan, here? Is he trying to link his political opponent to the war-crimes perpetrated by Blake? Or his he hoping RFK will wield whatever influence he has over the Johnson administration to pull Eddie from active duty? Either way, it puts Eddie at odds with his last real friend, and sole connection to the man he was before Vietnam.

A lot of fans declared shenanigans on this series when the first issue revealed that Eddie Blake didn’t shoot John Kennedy. The original Watchmen contains a brief mention of the assassination, but it’s hardly definitive. The problem was exacerbated by the movie (oh, that fucking movie), which took the liberty of just showing Blake with a sniper rifle on the grassy knoll. I know Eddie is mainly a gun-for-hire, but that’s actually kind of a shallow idea – once you get past the shock of it, Eddie shooting JFK rings hallow. But Eddie could be properly motivated to kill RFK, allowing him to continue fighting the war that he now believes in. I’m not saying that it’s definitely going to happen, but that would be markedly more satisfying than the secret-history assassination this series denied in issue 1.

A lot of what makes this mini-series compelling to me is the material not on the page, but there’s also a perfectly compelling Vietnam War-story between issues 4 and 5. We’ve come to expect a lot of moral ambiguity in those kinds of stories, but this moves into different territory altogether: presenting Blake as that fully realized amoral character we recognize from Watchmen.

Scott, I’m not sure I have a question to pose as I pass this off to you. How about this: all of these issues take their titles from songs. This issue is called “Kicks,” after the Paul Revere and the Raiders song from 1966. Kicks is an anti-drug tune that already seemed out-of-step with the culture when it came out. But the chorus also repeats the lyric “The kicks just keep getting harder to find” which could be referring to the increasing dark places Eddie is going to to understand the world. Look, man, I don’t know – here’s the song.

Scott: You could be right Patrick, but hang on a second, are those backup dancers doing the Elaine? Sweet Fancy Moses those where some funky moves! Anyway, I love how Comedian uses songs from the 1960s to reinforce the themes of each issue, but I found this one rather difficult to decipher, mostly because there were no lyrics quoted and I was not familiar with “Kicks” going into this issue. I ended up looking up the lyrics for guidance, which you can check out here if you’re so inclined.

I like your interpretation of “the kicks”, Patrick, though I could also see that line representing the increasingly drastic measures Eddie must take to accomodate his own bleak philosophies. He’s as self-righteous as always, but this is the first issue where he seems thoroughly unamused (even telling Moose he’s “done laughing”), and his actions feel less warranted and less forgiving than ever. Whereas he took some satisfaction in interfering with the L.A. riots and pissing off the chief of police, now it takes slaughtering a village of helpless women and children to constitue a victory in his mind.

Another line that sticks out to me is “Before you find out it’s too late/You better get straight” (I’ve omitted the word “Girl” because it doesn’t help prove my point). Eddie is too set in his nihilistic ways at this point to “get straight”. It’s already too late for him, so the line doesn’t apply. Instead, I think these rather Devo-ish lyrics apply to Bobby Kennedy. The Kennedys have been high on Eddie for a long time, letting him do as he pleases without seriously considering how his actions could adversely affect their careers. Now a problem has come along for Bobby. And he must whip it.

This sets up quite a conclusion for this series, pitting Eddie and Bobby against one another. Of course, we all know what the future holds for Bobby. Patrick, you said that Eddie perpetrating the RFK assassination isn’t a forgone conclusion, but won’t it be shocking if that doesn’t happen? Considering the emotional reaction Eddie had to JFK’s death in Comedian 1, what a perfect way to complete Eddie’s descent into darkness. I’m just afraid to see what else he might do.

11 comments on “Before Watchmen – Comedian 5”