Drew:  As a child, it seemed impossibly unfair to me that we’re more or less born into our religious beliefs — if there was one right way, how could so many people be consigned to hell simply by luck of birth? As a precocious skeptic, this just confirmed that religion was nothing more than an arbitrary (but comforting) tradition, practiced differently by everyone — like the way your family prepares stuffing on Thanksgiving, or the particular Monopoly house rules you grew up with. Of course, the wrinkle in that attitude comes when somebody does reject their parents’ religious beliefs (or stuffing recipes, house rules, political practices, etc), actively replacing them with something they deem superior. That wrinkle gets even wrinklier when that generation has their own kids — do the parents teach their beliefs as gospel, or foster the sense of skepticism that led to them changing their beliefs in the first place? It’s a daunting, complex subject, but it’s exactly where Jason Aaron sets his sights as he explores Gorr’s origin in Thor 6.

That origin begins 3000 years ago on a planet with no name, as Gorr’s mother leaves her last scrap of food as an offering to the gods. Gorr doesn’t understand the practice, and is made only more suspicious when his mother’s prayers are answered by a pair of monsters that eat her alive. Gorr’s life continues to be shitty, as his wife and children die, until he gives up on believing in the gods altogether, at which time he is cast out (and stoned) as a heretic. As Gorr wanders the desert, he discovers that the gods are, in fact, real (as seems to happen to everyone who wanders deserts). Far from ending his crisis of faith, he is enraged to learn that these all-powerful beings have simply been ignoring the suffering of his people, and uses one of their weapons to kill a god and escape his planet. We know the rest…or so we think. It turns out, Gorr isn’t just killing the gods — he’s enslaving them to build something. Also, he has a son.

The thought that Gorr is indoctrinating a child with his belief system is somehow even more unsettling than the thought of a deicidal maniac. This isn’t just a rampage — it’s a belief system. While I can understand why Gorr hates the gods, the thought of turning that into a lesson takes it his distrust of gods from “extreme prejudice” to straight-up “prejudice.”

The fact that Gorr is keeping gods as slaves demonstrates a fair bit of hypocrisy on his part (though he might see it more as their just desserts). His origin itself is conveyed in-narrative as a story, and the fact it features such fantastical and melodramatic elements makes it quite mythological in nature. Aaron puts a finer point on that Gorr-as-a-god point, by having a slave (Volstag the Valiant of Asgard) straight-up tell him he’s a god now. Apparently, that weapon he stole all those years ago (the very same smoky/inky weapon he uses to this day) is responsible for his longevity, as well.

However he acquired his powers, the point is clear: Gorr has become that which he most despises. It’s easy enough to see how torturing gods parallels his own suffering, but what I find truly interesting is that Gorr himself has become too preoccupied with his power to ease any mortal suffering. Gorr hates gods because they misuse their power, focusing on themselves instead of helping the mortals that worship them, but that’s precisely what he’s spent the past few millennia doing. He has the power of a god, but he has not done any more good with it than those gods he has persecuted for their negligence.

Gorr’s hypocrisy ties back to the notion of teaching his beliefs to his son, as one form of blind worship replaces another. The boy refers to them as “bad gods” because that’s what he’s been taught — the same way Gorr was taught that they were merciful when he was a child. I suppose there was never any suggestion that Gorr valued free thought, but it’s interesting to see that he hasn’t fostered the same skepticism that defines him in his son.

I’m fascinated by these theological questions, but I find it difficult to relate to how they work in a universe where there are actual gods bopping around. I suspect Aaron understands this, which is why Thor doesn’t appear at all in this issue. This is Gorr’s story, dealing with Gorr’s faith, and we need to dial back the presence of gods to make his crises and resolve more understandable. It’s an interesting trade-off: reducing the complexity of your storytelling universe in order to make the characters more relatable. It worked for me, but I’m curious if you felt the same way, Patrick.

Patrick: Every month on this title, we end up coming back to this question of what it means to be dealing with literal gods. Being an atheist or skeptic in the Marvel and DC universes is essentially to be wrong. It doesn’t matter if you believe in God, the Spectre is still an embodiment of God’s Wrath. The devil is a character in both of these universes. The devil! So one of the biggest questions we ask ourselves (i.e., “is there a god?”) is totally off the table, and especially off the table in a book explicitly about Thor, the God of Thunder. From a practical perspective, I view Gorr’s rejection of the gods as a rejection of faith.

Which might be obvious. But it also may warrant exploring a little – Drew, you make a joke about everyone finding god by wandering in the desert, but it’s worth pointing out that wandering the desert usually provides the wanderer with a bit of truth. In a weird way, Gorr is rewarded for his attitude toward the gods by seeing them at their most pointlessly violent – his very specific beliefs are affirmed. There’s a weird bit of visual poetry in the image of these two slain gods, each dead by the other’s hand. 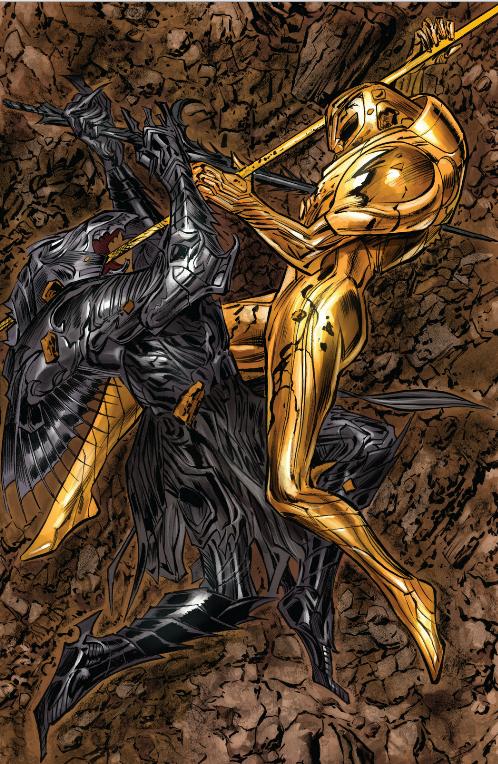 That moment is so clear and so beautiful and so transformative for Gorr. I absolutely love how it is presented without context: we’ll never know who these gods were, or if they were gods that Gorr’s people prayed to. We’ll never know why they were fighting, or what good (or bad) they had ever done for anyone. There’s a gold one and a black one and they saw fit to murder each other. That’s all they are.

So anyway, that’s an awful lot of talk about faith and belief and all that, but we’ve also got a classic villain origin story on our hands here. As such, this issue abandons essentially everything we’ve come to expect from this series. The three Thors are gone: in fact, we’ve no Thor at all. We don’t see Earth, and we don’t see any characters from the Marvel stable. Gorr is an invention for this specific story Aaron is telling, and given his stance on wiping out pantheons, this is the only story we can tell about the character. He’s elemental, and unlikely to turn up in Thor’s future Rogue’s Gallery going forward.

Perhaps even more readily apparent is the fact that we don’t have the smooth, misty art of Esad Ribic to take us through this epic. Ribic’s been a pretty good guide thus far, but his wide-eyed classical hero-worship art style would not have been totally appropriate here. The story demands less reverent art, so Butch Guice applies a simpler, less textured style. It’s still very good, but doesn’t ever manage to be as boldly beautiful as the five issues previous. I will say this for Guice – the man can distort Gorr’s face into an alarming variety of expressive grimaces.

Hey, did anybody else read the Saint Walker origin story when it was floating around the Green Lantern comics coming into Blackest Night? It’s remarkably similar to this story. In it, Walker is tested, and regardless of his faith, his entire family is killed. Walker takes the Job route, and decides that if it is God’s will, then he’s got to be cool with it. The experience is pretty similar, but they arrive at wildly different conclusions. I’m sure it doesn’t mean anything — what an obscure connection to make, right? — but look how much Gorr (pre-deification) looks like Walker.

Alright, let’s ask some serialized narrative questions going into the comments. Gorr has a son? What? Where did he come from? Where is he now? Is that son Gorr, and we’re just learning about the sins of our villain’s father?