Mikyzptlk: The Green Lantern books have engendered in me a healthy love of space-opera that Marvel properties have generally not been able to do quite as successfully. I’ve known about Guardians of the Galaxy for a few years now, but I’ve never given it a shot up until now. News of the upcoming movie has piqued my interest, however, and with that it seems that now may be the right time to start paying attention to this rag-tag team of space-faring weirdos. Brian Michael Bendis is clearly aware of all the hype this series is starting to get as well as he delivers something that features small and personal moments mixed with high-octane, blockbuster entertainment.

Peter Quill is a tween living a normal life with his mom until aliens known as the Badoon come down to take him out. Turns out, his father (J’son of Spartax) is a space-prince who once visited Earth many years ago. Peter’s mother dies, but he’s able to take out the alien scum. As Star-Lord, he forms the Guardians of the Galaxy to ensure Earth’s protection. J’son, now the “King of the Spartax planetary system,” tracks Peter down and tells him stay away from Earth as it’s been placed “off-limits.” Star-Lord thinks this will just bring a lot of bad attention to Earth and tells his father to go fuc -sorry, “krutack”- himself. Meanwhile, Iron Man zips through space and is attacked by the Badoon. The Guardians swoop in and save the day, but the surviving Badoon ships head for Earth. It seems that if J’son Spartax can’t have Earth, no one can. The Guardians head to Earth and take out the Badoon ships in a variety of entertaining and hilarious ways, but shortly after are placed under arrest by King J’son’s forces for being in “direct violation of the Spartax Earth directive” and are now considered prisoners of war!

With that out of the way, who the heck are these folks anyway?

From left to right we have Groot (a living tree), Gamora (an assassin), Star-Lord (but you already know him), Rocket Racoon (’nuff said?), and Drax the Destroyer (definitely ’nuff said). We also have Iron Man, who has decided to take a leave of absence from his Earthly responsibilities and head out to the final frontier. Oh, but now he looks like this for some reason: 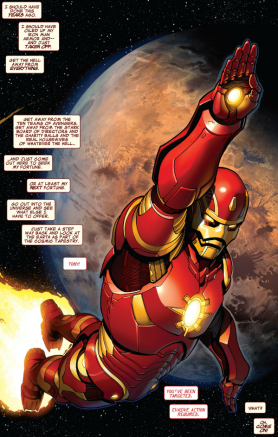 There seems to be quite a bit of excitement brewing for this franchise right now aided largely (perhaps mostly) by the movie that is coming out next year. It’s a smart move for Marvel Comics to capitalize on this right now and it’s an even smarter move to hand the reigns of this series to Bendis. He’s shown time and again that he’s capable of giving us extremely personal tales filled mostly with “talking heads,” and huge, action-packed tales that have the feel of Hollywood blockbusters built in. So far, we’ve gotten a mix of both styles in this series which it has benefited from greatly.

Issue 0.1 gave us a touching look at Star-Lord’s earliest origins, and aside from a shoot-out we didn’t get too much action. This introduction helped to ground this wacky, space-opera of a series in a very literal down-to-earth kind of way. From there, we are given fairly brief introductions to the other players in this series. I don’t know much about any of these characters (aside from Iron Man of course), but I’m confident that Bendis will dive into each of these characters in due time. I’m already starting to love Rocket Racoon who adds to the edge of the series while simultaneously adding the wacky and humorous elements that help to make this series a ton of fun.

As for right now, the first few issues are placing the focus on Star-Lord and his daddy issues, both in the sense of “my father abandoned me” and “my father is attempting to destroy the Earth.” The villain of the piece is an interesting choice considering that it’s the main character’s father, but it’s also interesting to note why he’s decided to twirl the ol’ mustache. Take a look at the following panels:

If one is trying to convince a roomful of space-folks that the Earth is a potential danger to the rest of the galaxy, those are some pretty compelling reasons. I loved how Bendis has used decades of random Marvel Comic stories to paint Earth in such a threatening light. Bendis probably could have just made up a motivation for J’son, but instead he chose to celebrate Marvel’s impressive history which gives J’son a much more convincing motivation for wanting Earth destroyed. However, this motivation is really just a front for one that is much more personal. All J’son really wants is his son to be by his side. Even though he’s being a total dick about it, all this really boils down to is a father trying to ensure his son goes into the family business as destroying Earth would sever any ties Peter has to the planet. Again, a small and personal element that’s mixed with a big blockbuster one.

I’ve credited Bendis for writing comics that can sometimes feel like a summer blockbuster, but his writing can really only take us so far. Steve McNiven is the regular artist of this series and his clean and slick artistic style, heavy with beautifully rendered splash-pages, help to cement the movie-like qualities of this series. Scott, it’s clear that I’m onboard with the ride that is Guardians of the Galaxy so far, but what about you? Would you like to see the focus shifted from Star-Lord a bit, or are you curious to see more of this father vs. son tale? Lastly, do you have any idea what the hell is going on with Iron Man’s suit? Seriously.

Scott: Well, I’m not sure about the suit. Maybe Iron Man just wants to look cool for his new space buds- the tree and and the raccoon. I’m definitely anxious to see the spotlight shared with the other guardians a bit more – so far we’ve only gotten little splashes of personality from each one (and we’ve hardly heard anything from Groot, whose been reduced to a splinter). It totally makes sense that Star-Lord has been the focal point of the series so far; he’s an Earthling, and these first three issues have been rather Earth-centric. I imagine as the series moves out into other parts of the galaxy (as the title suggests it will), each character will get his or her time to shine. So far — and I’m sure the presence of Iron Man is making this more apparent– the crew feels a little like an outer-space-themed version of the Avengers. They even have a big, angry, green guy.

One thing the supporting characters have going for them is the comedic relief they’ve immediately provided. “Blam! Murdered you.” Rocket Raccoon probably emerged as the breakout star of the series with his three-word catchphrase. Another recurring joke that had me rolling was the repeated cutting to Groot during the action montage in Issue 2. As McNiven and Pichelli show us what each member of the Guardians is up to, they continue to check in with Groot, who continues to be just a splinter of wood stuck in some dirt.

Classic Groot! I don’t know much about Groot. Apparently he can regenerate himself, just not all that quickly. It reminded me of Inception, when they would cut to the super slow motion shots of the van falling off the bridge, and you couldn’t be sure if it had actually moved since last time or not.

Like Mik, I love how Bendis incorporated so much Marvel history into J’Son’s speech to the Royal Ambassadors. I also love how Marvel is using it’s own creations as the reason why the rest of the Galaxy wants Earth destroyed. Earth doesn’t have the technology to compete with these other civilizations, but it does have genetically mutated superfreaks that scare the crap out of them. It’s hard for me to envision the heroes I’ve grown up with wreaking havoc on other alien lifeforms, but I see what Bendis is getting at. It’s an acknowledgement that every time an alien force has tried to colonize or destroy Earth, our superheroes have somehow banded together and kicked their butts back into space. Every time! Surely the rest of the galaxy has taken notice by now.

I completely agree that Guardians of the Galaxy feels like a blockbuster. It’s fun and it’s epic. My only concern is that it might not be able to sustain the same appeal when Earth stops being the central focus of the story. It’s impossible to review these three issues without talking extensively about the role the Marvel universe plays. Unfortunately, that universe is largely contained to one planet. A comic can’t rely on the history of other comics as it’s main selling point, especially when it’s supposed to have a much larger scope. It also can’t can’t keep featuring Tony Stark gallivanting around outer space forever. These issues have show a whole lot of promise, but it’s up to Bendis to turn Guardians of the Galaxy into an experience we can’t get- or haven’t already gotten- elsewhere.