Patrick: If you go back and watch old Flintstones cartoons, you realize that there’s not much to them beyond their prehistoric trappings. The setting is to unique and weird that it totally trumps character or story or even the jokes. The same can be said of the Jetsons — neither of these shows had characters or relationships that would hold any water  if they were to be set in a modern day context. So the 1987 animated feature The Jetsons Meet the Flintstones was little more than the characters pointing out how strange the lives of their counterparts were… that and a convoluted time travel plot. The raw charisma of Jonah Hex and Booster Gold save All-Star Western 20 from a similar fate, but not by much.

Hot on the trail of the Clem Hootkins gang, Booster Gold and Jonah Hex encounter a pile of corpses belonging to said-gang. Fittingly, this upsets Booster, but seems like All In A Day’s Work for Jonah. Seeing what kind of brutality the thieves are capable of, Booster enlists Hex’s help in bringing the bad guys to justice. So they ride through the desert, until they happen upon the whole Romeo and Damita’s banditos, who appear to be living in an old abandoned mission. In one of Moritat’s signature-awesome pages, we can see that they’re… misusing it a little.

This single image actually tells a pretty vivid story — one that renders the rest of the issue kinda pointless. Just a quick scan of the crew on the left suggests that there are people from all kinds of backgrounds following this Romeo guy — including one poor dude who looks like he’s still fighting the Civil War. Plus, there’s something so brash about performing this heart-removal ritual as golden sunlight pours in through the window. And that altar is absolutely insane — candles and skulls everywhere, but it’s not so cluttered that Romeo’s followers wouldn’t want to observe the proceedings from the altar itself. How would all these people come together? Why do they follow this enigmatic outlaw bandit? Is that a fucking ninja in the doorway? It’s a great set of intriguing questions, but we don’t really get to explore them when Booster enacts his brilliant plan to get the gold back.

That plan is “walk in there and take it.” Turns out to be a pretty effective plan because, even when he’s spotted and the gang opens fire on him, Booster discovers that he’s bulletproof.  And that’s where most of my problems with this issue lie — neither Booster nor Jonah are active or engaged in their own heroics. The banter between them is sorta cute, but it ultimately betrays the fact that neither man much cares for the other or the journey they’re on. I had been sort of excited for the Booster / Hex team-up because I was imagining them as a twisted version of the Odd Couple, several steps more extreme than the Hex / Arkham pairing. But there is one trait that they share, and that’s dispassionate detachment from their surroundings. Booster is a shitty opportunist using future tech to effortlessly make himself a hero, and Hex is a stone cold survivalist, making as few personal connections as possible.

Which just means that there’s not all that much to hang your hat on here. It’s interesting how frequently Jimmy Palmiotti and Justin Gray make the characters’ curious interest in each other explicit — as though there’s no other real justification for these two to be palling around together. Booster is curious to see which half of the Jonah Hex legend is true: is he a hero or is he a psychopath? And Hex’ interest in Booster is equally abstract: what’s all this future stuff about? Hex asks about the suit and even asks to “see them spectacles” when Booster lets on that he’s able to peer through walls. Presumably, those sorts of fascinations with the future and the past are what drive editorial forces to pair these characters together in the first place. But also, maybe I misunderstand the appeal of Booster Gold — after he gets shoot-up by the gang, he sits up with a goofy cross-eyed look on his face.

It’s almost a Bugs Bunny moment — like we can hear the tweeting birds circling his head as his eyes uncross. I know we’re talking about time traveling superheroes, but the tone of the rest of the book is serious — to the point of being pretty grim — so it feels a tad incongruous.

The 1890s StormWatch back-up was also disappointing this month. The newly formed team investigates some wild west vampires, and Dr. Thirteen ends up being bitten. The whole time, Thirteen is all like “there’s no such thing as vampires” — a position that’s always frustrating to see smart people take in comic books. Obviously, he’s wrong so he’s also the first victim — as though it’s a weird little morality play: if only he had believed in vampires, maybe he wouldn’t be murdered by one. It doesn’t help that the whole mission is so rigidly put-together as to necessitate Jenny Freedom’s question:

Blarg. I’m having a hard time with Wild, Wild StormWatch — there’s something appealing in the concept, and I like the characters, but if all of their quests are going to be inorganic monster hunts with mangled lessons, then I might just have to tap out (like we did with Tomahawk). Drew, is there something I’m missing here? And how about with Hex and Booster? Did you find this issue more interesting than a drawing of those two characters together?

Drew: I did. I’ve always thought of Booster’s comic-releif cartoonishness as the point of the character — he’s terrible at everything, but he has enough future technology that he succeeds in spite of himself. That’s an inherently funny premise for a superhero — especially one immersed in the super-serious world of DC superheroes. But you know whose even more serious than Batman? Cowboys. Have you ever seen Shane? Where Batman takes on sidekick after sidekick, Shane fucking abandons the only kid that likes him. Like Booster says, “that is seriously hardcore.”

I definitely agree that Booster’s presence is incongruous, but I think that’s always the case. For me, Booster in the old west — and especially Booster paired with the humorless Hex — is simply an exaggeration of what I enjoy about him in the first place. I get the impression that Booster isn’t universally loved — I don’t think you’re alone in being put off by the humor here, Patrick — but I’ll always find things like forgetting most of your life but specifically remembering yoga pants as hilarious. 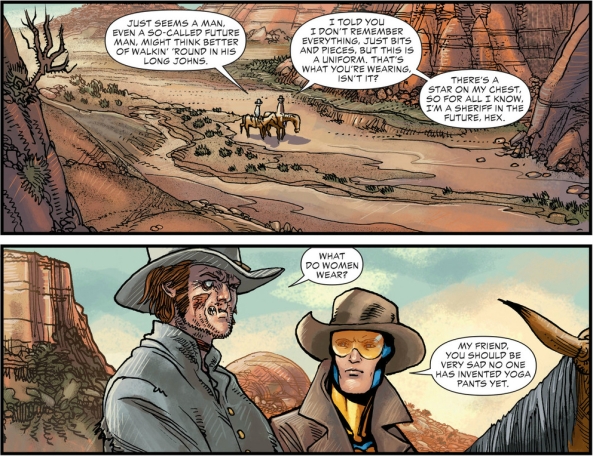 Also, Patrick, I think you’re assessment of the editorial goals of this pairing are off. Sure, the humor of the Jetsons gawking at the Flintstones (and vice versa) might have been a humorous bonus, but I think the point was to further ensconce Hex in the DCnU, which is pretty hard, given that he lives a good 130 years before the rest of the universe. Sure, there are other really old characters he could be interacting with — Frankenstein, Madame Xanadu, Stormwatch — but DC’s resident time-traveler seems like a logical choice.

Speaking of Stormwatch, yeah, that backup wasn’t the most fun. Patrick already ably pointed out the issues with exposition — which is explained away by Adam wanting to keep the vampires “a surprise” — and Dr. Thirteen’s stubbornness. Beyond Dr. Thirteen’s denial that these things aren’t really vampires — hell, they might not be — I’m frustrated that he still fails to defend himself.

Like, even if it is “mass madness,” there are hundreds of them. Raising your fists menacingly might not offer you the protection you need to survive this thing. I’m holding out hope that future installments might lose the exposition in favor of detective work — justifying Dr. Thirteen’s presence beyond comic relief — and that we might face a bad guy that is neither vampire, zombie, or werewolf, since we’ve kind of seen all of those at this point, and these are somehow all three.

We’ve often remarked at the erratic quality on this title, and while this issue was by no means my favorite of this series, I think it manages to be more of a hit than a miss. I found the Booster humor to be more charming than dumb (and perhaps more importantly, fitting with the character as I understand him), and I think Palmiotti and Gray did a great job of keeping Hex at his most abrasive. It may not be the highest standard, but I had fun, which is often all I really need from this title.