Patrick: When my friends and I first discovered that soda fountains existed, we became obsessed with creating new concoctions by combining sodas. I think this is a phase that we all go through: while the specific recipes and names change from friend-group to friend-group, we’ve all heard of ‘The Suicide” – an unholy mixing of all the options at once! (Even Diet? YES EVEN DIET.) Appropriately enough, my buddy Pete and I had both a Luke Skywalker and a Darth Vader in our recipe rolodexes. The Luke Skywalker was basically just the light sodas — Seven Up, Mountain Dew, Orange Crush — and the Darth Vader was basically just the dark sodas — Coke, Cherry, Dr. Pepper and Root Beer — and we loved coming up with those drinks based on our favorite Star Wars characters. But, as everyone eventually learns, this is silly: those individual sodas are delicious because they have strong individual identities, and the joy is lost when you just pile everything together and hope for the best. Darkhorse’s The Star Wars reveals the experimentation behind the original script to Star Wars. It’s a big nasty pile-up, but it makes me all the more happy we ever got the simplicity of the original trilogy.

As a point of clarification, I’m going to try to refer to the characters by the names they’re given in this series. If you’re just checking in on this review because you like the movies are are curious what this thing is about, then PREPARE TO BE CONFUSED. One of the things I keep realizing in reading this series is that George Lucas eventually had the good sense to compress his billions of ideas into just a few characters. But here in the early draft, all the component pieces are here, but they’re don’t line up at all with the end result. There are twins, but they’re Leia’s brothers. Also, Luke Skywalker is an elderly Jedi revolutionary, and Annikin is his brother-in-arms’ son. Plus there’s a Darth Vader running around, who appears to be unrelated to either Luke or Annikin. Just wanted to get that out of the way.

This issue opens — comfortingly — on the See Threeprio and Artwo-Detwo wandering through the the deserts of Aquilae, home planet of Princess Leia. Meanwhile, the Princess, accompanied by the young Annikin Starkiller, speeds through that same desert in search of the entrance to her family’s underground military base. After picking up the droids, they meet up with General Luke Skywalker at the secret base. Luke has the unenviable task of informing Leia that her father had been killed in the recent attack.

Artist Mike Mayhew is incredibly well fit to precisely this sort of moment. Look at the camera’s perspective of Leia in these three panels – it perfectly captures the energy and power draining out of her face as she learns of her loss. Combined with Rain Beredo’s colors, Leia’s face is almost supernaturally expressive in this scene. Take a look at those eyes in the first panel! And what’s more, the abstraction of the cave background only serves to make us focus on the characters even more in this moment. There’s nothing else that matters here – just Luke and Leia (oh and maybe sorta Annikin too, I guess…)

Anyway, our heroes decide to make for Gordon Spaceport, where Luke Skywalker hopes to meet up with his old friend Han Solo. Han Solo! They’re ambushed twice in the desert and both times it sorta plays out the same way: “Maybe we can talk about this” followed by “nah, let’s just chop people in half with lightsabers.”

There are a lot of things that bug me about this story. Tonally, it’s an unsettling mix of Original Trilogy and Prequel Trilogy, but the recipe seems heavy on the Prequels. This issue was better than the two previous in this regard, but there are still entire pages devoted people discussing the mundane, procedural politics of the Star Wars universe. It’s dull, dull shit, and I can’t fathom anyone would have prioritized that stuff over the weird relationships forming between this newly formed team of refugees. The painfully boring details tend to trump the interesting shit at every turn. Here’s a good example of that: Darth Vader meets with Prince Valorum, a “Knight of the Sith” and the scene plays out like Vader is the Empire’s HR representative. 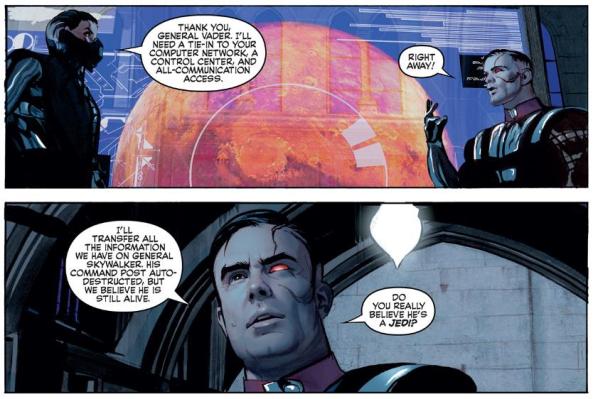 These are two half-machine men with impressive reputations meeting for the first time, and Darth Vader is offering to transfer data to him? Shouldn’t he make sure Valorum gets his @GalacticEmpire.com email address set up and give him a tour of the station first? Ooo! Maybe he should make sure he’s got his photo ID and he’s parked in the right structure! (They’ll totally ticket you if you’re not on the first three floors.)

And then there are the moments that the issue do focus on the relationships between the heroes and I’m just left… sorta confused. Annikin does a good job rescuing the twins during the second ambush, and before he says anything, Luke’s all like “that was pretty good, BUT WHO CARES?!” To which Annikin sensibly responds “I wasn’t going to brag, sir.” What the fuck was that about? Unless that moment was supposed to teach me that Luke Skywalker is a dick, I don’t think it landed as intended. Scripter J.M. Rinzler might have his hand forced as far as the story beats are concerned, but he certainly didn’t do anything to smooth out that awkward moment.

Taylor, how are you enjoying this thing? It is hard to talk about this without comparing it to movies, right? I had written two or three paragraphs about how I didn’t like that these Jedis are so keen to murder before I realized that that’s me making unfair comparisons to the original. But then again, I wouldn’t be reading this at all if it weren’t for its connection to Star Wars. So, what the hell – let’s make those comparisons, right?

Taylor: I’m all for making the comparisons between this weird thing and the movies with which we were gifted. It’s sort of like comparing modern day religion with the proto-religions that came before it. Not only is it fascinating to notice the parallels between Osiris and Jesus Christ, but acknowledging those parallels tells us something about the human condition. Now, I’m not saying this Star Wars title necessarily informs me about the human psyche, but it does make me think about why I like the original so much and what I like in my storytelling.

Patrick, whereas you aren’t so keen on the murderous nature of the Jedi in these issues, I find their bloodthirsty ways oddly refreshing. The Luke Skywalker we see in this version of Star Wars is obviously the character that became Obi-Wan Kenobi in later revisions of the story. We all think of Obi-Wan, portrayed by the paternal Alec Guinness, as being a man of peace who only resorts to violence as a last resort. A warrior-poet who would just as soon muse on the nature of the force before whipping out his lighsaber. But Luke Skywalker, his parallel, has a Brock Sampson-like dispostion that causes him to kill first and ask questions later.

This is a stark contrast compared to the Jedi we grew up with. Can you imagine how our perception of Obi-Wan would be different if instead of using a Jedi mind trick on those Stormtroopers in Mos Eisley he just chopped them in half with his lightsaber instead? He would seem less like a Buddhist monk and more like a Knight Templar, perhaps more accurately reflecting the dangerous world in which he resides. I’ve always found it difficult to believe that that the touchy-feely Jedi could ever defeat the always practical and violent Sith. I mean, do any of us really believe that Yoda would have survived a run-in with Darth Maul? As portrayed here, the Jedi know how to kick some Imperial ass without batting a lash and that frank ability of their’s makes them seem more capable then their motion picture counterparts. It’s a more believable war happening here than the one we see portrayed on the silver screen, even if it does call into question the morality of our heroes.

And this is perhaps merely a byproduct of the story written here than the one we eventually got. Old religions have a certain violent streak in them that their younger counterparts lack. Hell, just compare the Old and New Testament Gods of the Bible to understand that; the former is all fire and brimstone while the latter is forgiveness and love. Similarly, this older version of Star Wars seems to simply be a more dangerous galaxy than its progeny. We’re all use to C3PO and R2D2 being the lovable droids thrown into a conflict that is beyond their scope. However, in their proto-forms, even they are capable of being evil and dangerous. When Anakin asks Luke if they should bring the droids with them on their trip he says yes, but he also warns Anakin that the droids may eventually get him into trouble, should he say the wrong thing around them.

This is a far cry from “Master Luke” and the very idea that they helped construct the Death Star makes them singularly nefarious. However, in their defense, they seem less like people in this incarnation and more like true robots. Lucas even throws in some Asimov robot laws into the picture too, seemingly to hammer home the point that the droids are more machine than man.

It’s these parallels and comparisons that ultimately made this a good read for me. My blush-inducing knowledge of the Star Wars movies serves me well in being able to pinpoint the kernels of future characters or plot points which eventually became the Star Wars I grew up watching. Often, as you point out Patrick, this makes for a story that is terrible in a lot of ways. The characters behave in odd ways (Anakin punches Princess Leia?!?) and the plot is unnecessarily muddled in bizarre politics and nonsensical characterization. But I’m not reading this for a  good story. I’m reading it because I love Star Wars and it’s fun to see where it came from and how the story eventually became what it became. It’s like reading about the origin of a myth or a god in that respect (and that’s kind of what Star Wars is today, right?) and I simply find that fascinating. While the “Suicide” remains a legendary feat of our youth,  in my maturity I think I would rather find out what’s the secret recipe Coca-Cola because that just tastes better.