Shelby: The occasionally tempestuous relationship between the church and the state has a longer relationship than one might realize. In ancient times, being a ruler often came with the title of deity; your word was law because it was divine. Martin Luther was one of the first to begin to call for a separation of the two, and by the time the First Amendment of the United States was drawn up, Thomas Jefferson was speaking of “a wall of separation between the church and state,” in order to guarantee religious freedom. Personally, I believe very strongly in the idea of the separation of the two, namely because there are many religions in the world, and I see no point in a government forcing someone to follow a set of beliefs. That is not genuine worship. In East of West, however, Jonathan Hickman presents a trickier situation; there is no religion, there is no government, there is only The Message, and if the Message demands political leaders keep the populace dumb and under control to prep them for the four horseman of the apocalypse, the politicians hasten to obey.

Antonia LeVay, spooky president of the Union, is having some trouble keeping her nation in line. As her adviser Doma rather poetically puts it, the city burns because the people burn with distrust, with anger and opposition. LeVay recalls her instructions from the three horsemen when she was chosen to lead and prepare their coming; the population was to be kept calm by a semblance of law and order. So, LeVay sets out to put out the fires by whatever means necessary; she imposes food and energy rationing and martial law. The people riot, so she captures 4 of the opposition’s ringleaders and summarily executes three of them. She explains to the last remaining rebel that she does not offer hope because there is none to be had, only the ultimate freedom of death, so the rebels should probably quit their bitching and be grateful for what they’ve got. Meanwhile, Death finally finds the lady in the lake he was looking for, except instead of a lovely, Arthurian nymph, he finds Oracle, chained in a prison described as the intersection of retribution and faith, and she is FAR from lovely.

She must be a powerful creature if Death himself has to trade with her for info. Hickman is revealing yet another aspect of his mythology here; oracles are generally connected with pagan religions, specifically the ancient Greeks and Romans, so her inclusion into this pseudo-Christian apocalypse is very intriguing. It’s also intriguing to me that the Oracle exists at all in the face of the Message. It comes back to the question of how much of this story is pre-ordained by prophecy, and how much is yet to be determined. Death has got to be pretty familiar with the Message, you would think it would spell out whether or not he finds his son. Either Death is following the path fate has laid out, or he is knowingly breaking from what he knows is supposed to happen.

While Death is unafraid to do what he has to do to get what he wants, LeVay does what she has to do because she knows she has to do it. In her mind, she already knows the end of the story, and she just has to make sure everyone ends up on the same final page. I love the way Hickman and artist Nick Dragotta and colorist Frank Martin give us a fuller look at what happened when War, Conquest, and Famine raised her to the post of president. Way back in issue one, we got only a couple panels: her reciting a part from the Message, and War claiming she’ll do for now. In a gorgeously colored flashback, we finally get their instructions to her, and just what she is willing to do for them. 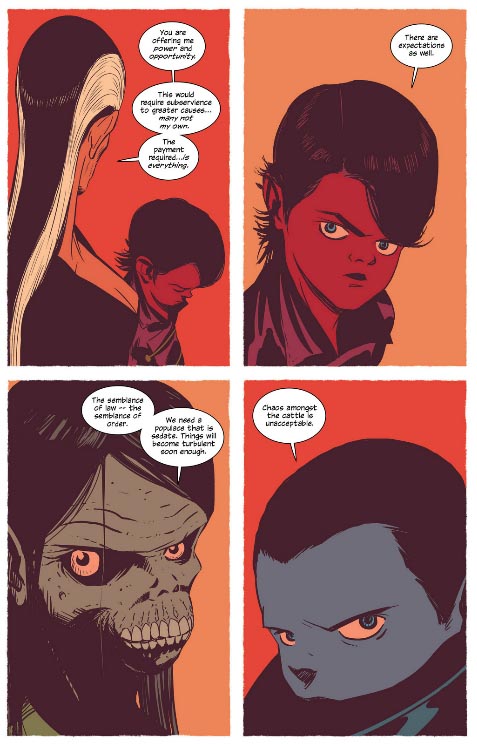 This sequence takes my breath away. Martin gives Dragotta’s pencils a warm wash of color, which simultaneously adds a vintage tone to scene (very appropriate for a flashback) while recalling the fires LeVay is working to extinguish. It reminds me a lot of Francesco Francavilla’s pulpy, grindhouse style, which makes sense considering we are recalling a murder spree enacted to find the right believer to rule the people. This is where it comes back to the idea of the separation of church and state I mentioned in my intro. There can be no separation of the two in this society because there’s no distinction between the two. There is no church, and there is no state, there is only the Message. Hickman has crafted a society which exists only to prepare for the time it no longer exists. Be grateful you are alive, because soon you will all be dead. This book is bleak and beautiful; it’s one of the titles I’d hold up as an example to people who dismiss comic books as a medium. There are some very heavy themes at play here; Taylor, what do you think about the world of East of West?

Taylor: I’m pretty much in love with it, in a masochistic sort of way I guess. East of West is many things but it is never a light read and, as you said Shelby, it’s themes are pretty heavy handed. That being said, living in a city like Chicago exposes you to some of the darker aspects of the human condition, so it’s nice to read this title as a sort of affirmation that goes: You are not alone. No one in East of West is exactly a winning personality, and the world as a whole is full of those who manipulate, murder and cause mayhem. In many ways it is a reflection of our own world, only in this reflection everything negative about the world is accentuated and distorted alarming degrees.

An obviously example of this distortion comes in the character of LeVay, who seems to be one the more ardent believers of the message. LeVay is is president of the union and if that lone fact wasn’t terrifying enough, what’s more is that it seems like she’s pretty good at her job. Of course calling her the leader of her nation is a bit of a misnomer since she takes her orders from Horseman, but her unflinching will to see their plans through is terrifying. LeVay has a singular ability to do the bidding of the horseman and wrap it up in such a way that appears to be part of bureaucratic policy. When attempting to quell the chaos that threatens to disrupt The Message, LeVay makes her crackdown seem not like the work of a madwoman, but the calculated and necessary steps taken by a leader dealing with a crisis.

I love the double entendre she employs here when she states that short term goals can’t take precedent over those of the long term. On the one hand, she is speaking about the political situation she is in charge of. On the other she is of course referring to The Message. Naturally, few in the audience fully grasp the meaning behind her words but it’s interesting that she is essentially telling everyone the truth of the situation. This simple fact, that she told the truth to everyone and just doesn’t give a fuck is pretty terrifying. She’s confident in powers and ability and also confident in The Message. This makes it seem like the apocalypse will indeed happen and there is absolutely nothing anyone can do about it.

Again, this is bleak. We see that the protesters are demanding the truth, but we can only surmise the amount chaos that would ensure should they find out what LeVay’s actual plan entails. If there’s chaos now because of curfews and rationing, what would happen if everyone knew the world was nearing its end? The only recourse from the imminent doom that plagues this series is Death, who of course is part of the world’s end, in theory. Oddly, we can only hope that what he learns from the Oracle will somehow save the world from the doom that it’s plunging into head first.

I think it’s fitting that a series so steeped in heavy themes should take on the air of western in many ways. While there are several parallels that could be drawn between an old Eastwood Spaghetti flick and this series, perhaps the most moving is the art itself. I’ve found Dragotta’s art to be a revelation throughout this series, as it accentuates the world created by Hickman’s scripting. Normally Dragotta operates incredibly well when drawing barren landscapes that bare a striking, and certainly intentional, similarity to the Southwest. This area, aside from being the setting of numerous Western media, is also austere in its beauty, with something of death always lingering over it. Basically, it’s the perfect element for this title. However, in this issue all action, save that which follows death, takes place in a large city. Dragotta navigates this change well and manages to still use some of his signature elements in depicting the city-scape. 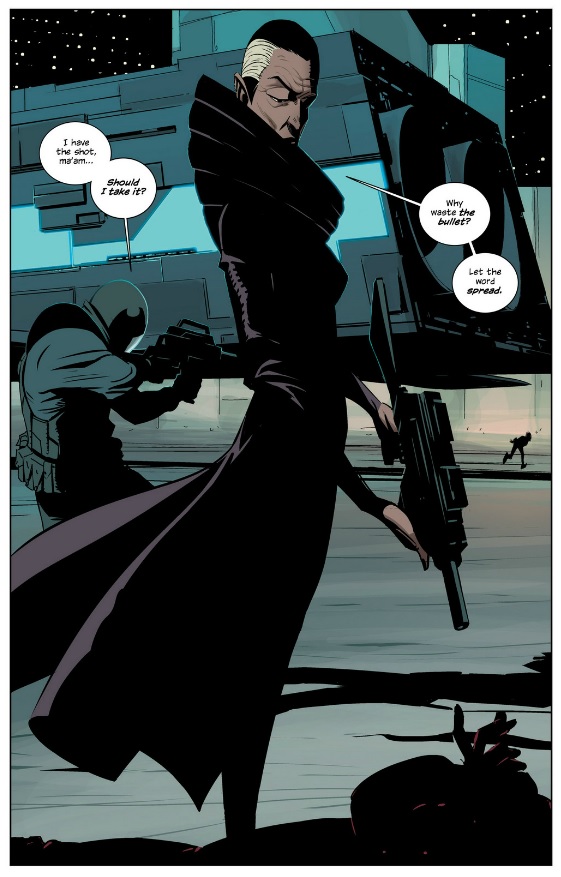 The balance of monolithic shapes to the wispy LeVay is done well and it reminds me of death standing next to sandstone butte. Even though the setting is incredibly different, the effect is the same. Wide open spaces create a sense of emptiness and powerlessness, feeling which surely many readers are experiencing right now at this point in the series. Also, what character design! LeVay is simply menacing. Her eyes are never depicted being more than halfway open which gives you the sense she’s unflappable and perhaps without any empathy whatsoever. Wonderful traits in villain and someone who believes in nothing but The Message.