Taylor: I enjoy camping and trips into the wilderness. There’s something refreshing about abandoning the trappings of modern day life and “roughing it” for awhile. Maybe I feel closer to nature and its beauty or maybe it’s just the quiet I can enjoy like nowhere in a populated area. However, this silence isn’t always peaceful and nature isn’t always a thing of beauty. Sometimes the silence — especially late at night — is terrifying as the isolation of my situation sinks in. The sense of peace I once had quickly transmutes to unease. The benign perception of nature is replaced by the more terrifying and accurate realization that, given the chance, nature would just as soon destroy as nurture. All this, and I know for the most part I am safe; I could be rescued if worse came to worse.  When I realize that, I can’t help but wonder how Lewis and Clark felt being absolutely in the middle of nowhere with no one to help them should things go wrong. The sense of terror they must have felt on occasion permeates the third issue of Manifest Destiny, blurring the lines of historical fiction and reality.

It may sound strange to make the claim that a series populated by the likes of minotaur (of a sort) and zombies (of a sort) could seem real, but bear with me. When we last saw our heroes, Lewis had discovered that La Charette has become overrun by zombies. Along with Clark and the other soldiers, they are trapped in the settlement by the minotaur-like creatures roaming the nearby woods waiting to kill and eat them. As Lewis and Clark are battling the zombies, a group of humans show up and helps them dispatch the unwanted vermin. The new arrivals explain that they are all who remain human from the settlement – everyone else having fallen victim to a fungus/vegetation/zombie organism. As the issue closes, Clark begins to wonder if his Indian guide, a young woman, is all right with all sorts of beasties running about.

The world that Lewis and Clark are surveying is fraught with danger what with monsters and beasts of all sorts at every turn. The wilderness they have to survive in is similar to the one I sometimes glimpse when I’m camping. It’s unsafe, unkind, and utterly uncaring. In previous issues, we’ve witnessed men cut down by minotaur creatures and a mysterious, green eyed woman throw herself from a cliff for reasons unknown. To add to their misery, our explorers are attacked by plant-zombies in this issue. These creatures, as drawn by Matthew Roberts, share a resemblance with everyone’s favorite plant based hero, Swamp Thing.

Their story — and the quite disgusting way they are portrayed — might remind some readers of Swamp Thing series. This hardly seems to be a coincidence. Writer Chris Dingess cites Swamp Thing as one the comics he first read and which made him want to write comics. That being the case, it seems only fitting that an homage to one of his favorite titles would make an appearance in his own series.

It’s these zombie creatures which I find to be the most disturbing part of Manifest Destiny thus far. While the minotaur creatures are fearsome, they at least seem to be fairly straight forward. They’re big, brutal, and love eating humans. These plant zombies on the other hand are more insidious. We don’t know what their origin is except for that the they first appeared in rabbits. They turn people into plant based creatures who apparently are controlled by a hive mind. But what is that hive mind? What does it want? Also, how are these creatures linked with the woman they saw fall from the cliff, if at all? These plant-zombies smell of a dark fear and I can’t help but think of how they are similar to the diseases Lewis and Clark encountered on their voyage to the west. Both come unexpectedly and both kill without remorse. They are also both spread through contact, with their origin being mysterious and somehow tied to nature. Lastly, both destroy the body in insidious ways – nothing as straight forward as a being torn apart by a giant buffalo-taur creature.

Pointing this out makes me want to view this series as one big metaphor for the danger the actual Lewis and Clark put themselves in when they undertook their quest to scout of the Louisiana Purchase. The seeds have been planted for an eventual munity and we still have a mysterious arch to deal with, all of which seem to portend hardship ahead. However, will those aspects of the series fit as neatly into a metaphor as the plant-zombies do? If they can, it would be a marvelous thing, as the series would become something strange. You could predict  the next issue by reading the next chapter of an American history textbook. Finding these parallels would be really fun, but could prove difficult, because what are the minotaur supposed to represent exactly?

Patrick, are you on board with the idea of this series being an extended metaphor or do you think I’m reaching too much? I really want to like this series – I just love alternate histories – but am I seeing things that maybe aren’t there? Does my experience camping qualify me to fight off plant zombies?

Patrick: If Retcon Punch was picking teams for the plant-zombie apocalypse, I’d draft you in the first round. Now, if were were fighting Walking Dead / Resident Evil style zombies, I might have to go with Drew — he’s smaller and might prove more useful navigating urban environments — but if we’re eluding moss-men in the American frontier, you’re my guy.

Taylor, I think you can make a strong case for Manifest Destiny as metaphor for the actual Lewis and Clark expedition. In fact, it seems like a simple case of fantastic hyperbole. Just take any danger that they might have encountered and twist it 90 degrees toward mythological. What I find so fucking cool is the breadth and depth of the mythologies Chris Dingess is pilfering from. “Minotaurs” (I still think Centuar is more appropriate) are creatures from classical literature, guarding Daedalus’ labyrinth. The modern zombie traces its origin back to George Romero’s 1968 film Night of the Living Dead. And then there’s Swamp Thing, a comic book that first appeared in 1971, but rose to legendary status thanks to sheer volume of incredible writers that worked on the character. (For real, take a look at Swampy’s parentage: Lein Wein, Alan Moore, Grant Morrison, Brian K Vaughan — and that’s not to mention his excellent appearances in the New 52 headed by Scott Snyder and Charles Soule.) My point is that everything is borrowed from masters of different genres and different mediums. It’s a mythological melting pot, and that proves to be the most interesting metaphor in the series.

Which leads me to Sacagawea — I can only assume that’s the young guide they were supposed to meet at La Charette. Despite Lewis’ hemming and hawing about leaving a poor little girl alone in the savage wilderness, Dingess and Roberts want us to know that the girl is more than capable of taking care of herself.

We don’t get a lot of her in this issue: really just this one drawing, but let’s take a look at some of the visual cues Roberts gives us here on this final page. First, she’s lunging out of the darkness, from high atop the trees, to attack a group of creatures who are bigger and musclier than she. Second, she’s got a cape that flares out when she dives through the air, making her seem more intimidating in the moment before she strikes. Finally, she’s packing a spear and a dagger, not guns. You guys, I think Sacagawea might be a superhero. Hopefully, more on that next month!

I do love the way this series sets up it’s genre/media tropes in one issue and then let’s the comic embrace those trappings in the next. Issue one introduced the buffalo monsters, issue two let them rip people apart in the most gruesome way imaginable. Issue two introduces plant-zombies, so issue three gives us both the requisite scene of discovering how to fight them and the first-hand account of the disease taking over. Here’s an example of one of my favorite zombie-comic cliches as it appears in Manifest Destiny 3.

Zombies in profile, riddled with bullets; followed by zombies from the front -none the worse for wear. That’s just a slice of the action-packed first half of this issue. This series can tend to get a little wordy — what with Lewis’ exhaustive journaling — so it’s nice to see so many pages handed over to sleek graphic storytelling without relying on speech balloons and narration boxes overmuch. As you can see from the panels I posted above, colorist Owen Gieni continues to embrace that solid-color-background aesthetic. In fact, his choices gets even bolder during the zombie scuffle, as the space behind the action fluxuates wildly from red to blue, yellow to purple. Hands down my favorite, and the most disarming, is his use of orange in this sequence (a color he withholds for the rest of the issue). 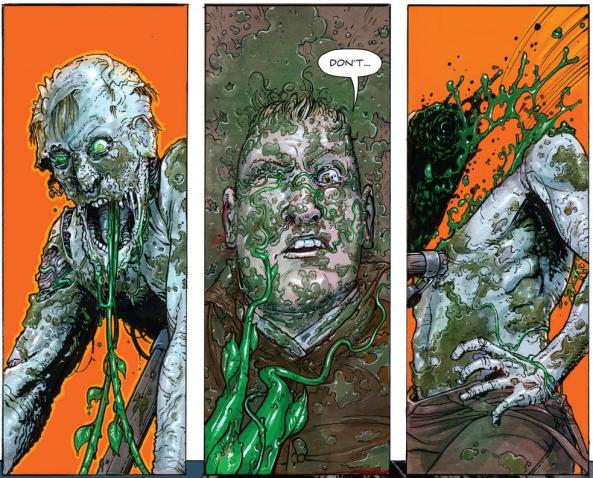 The series still has the same kind of concrete problems Drew brought up last month (we can add to Drew’s list of objections “why would creatures that are half-buffalo, half-horse eat meat?”), but I’m just enjoying this bizarre intersection of American History and mythology.