Taylor: Recently the cast for Star Wars Episode VII was announced. As long rumored, Mark Hamill, Carrie Fischer, and Harrison Ford will be reprising their roles as Luke, Leia, and Han in this installment, which is cause for mixed bag of emotions. I appreciate that the new Star Wars movies will attempt to link themselves to the original trilogy, but I also want the thing I loved preserved. George Lucas has given us ample reason to fear further Star Wars movies, and I worry that casting original actors in the new movie will somehow taint what came before it. At the same time, I’m also aware that my beloved characters have been taken out for a spin by multiple writers in the past. This hasn’t ruined my love of the original trilogy in the slightest, so maybe I just need to relax. With these ideas fresh in my mind, it’s interesting to pick up Star Wars Rebel Heist 1. Can it assert that use of beloved characters in new stories is okay? Or will it show they are best left to our memory?

As part of their fight against the Empire, the Rebel Alliance has resorted to some drastic means. In training their new recruits, they will occasionally drop them into a live mission with an experienced officer. Jan happens to be one of these recruits. On a mission on Corellia, he meets up with the one and only Han Solo, who promptly gets them both into a life or death speeder chase. The two rebels escape in a piece of junk spaceship (that’s not the Millennium Falcon), and then get captured while floating in space. While in custody, Jan loses total faith in Han and discloses his identity to his captors.

Naturally, the question I asked myself after reading this issue is: “did it live up to the lofty standards set by the trilogy which gave it birth?” However, I realized that comparing one of the most beloved movies of all time with a monthly issue probably isn’t fair and revised my thinking. That being said, as a single issue which takes place in the Star Wars universe, this episode was…okay…

There’s nothing about the story which stands out as being particularly bad or particularly good. It’s mostly a fun little piece on an adventure that Han had one time while Chewie was probably busy saving all of those little mouse robots from garbage masher. Writer Matt Kindt does an admirable job of writing a story that is accessible to the Star Wars layman as well as the Jedi holy man, which is a testament to some of the thought that went into the issue. Jokes are made about how shitty the non-Falcon looks, “scum and villainy” is dropped in a conversation, and we even get Han Solo. However, there’s no need to know about these things to appreciate and understand the issue.

While I enjoy simply revisiting the Star Wars universe, that’s not really enough to make me enjoy this issue as much as I had hoped I would. One major obstacle causing this was the overly intrusive narration of Jan. This character, who to my knowledge is new to the SWU, has a lot to say about just everything. He goes into great detail about who Han Solo is and what exactly his personality is like making the issue just as much a character sketch of Han as it is Jan. And while this might be appreciated by those who aren’t super familiar with Star Wars, for those of us who are, it’s maddening. We know who Han Solo is and exactly how he acts and views the world. We don’t need someone else telling us that, we’ve seen him portrayed (and portrayed well) in the movies. When we’re being honest, this choice is very odd, for who would be reading this comic who hasn’t already seen the original trilogy?

Jan’s loquaciousness also just gets in the way of the story telling in general. Throughout the issue he feels the need describe the action going on around him in vivid detail. When he and Han board a spaceship while under fire, he has quite a bit to tell us. 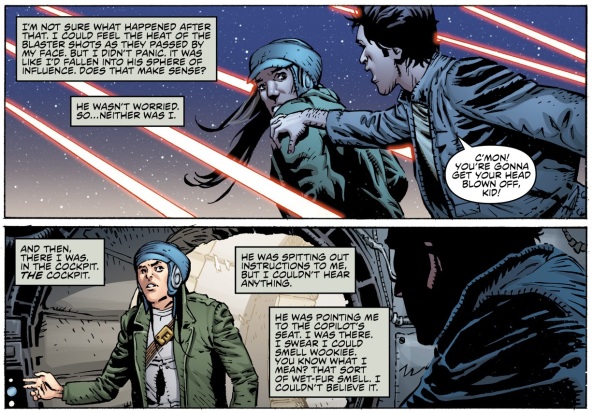 There’s a lot here that doesn’t make a whole lot of sense. Jan says he doesn’t know what happened next but all he did was take a couple steps onto the ship. He then says he smells Wookie in the ship even though we later find out that Chewbacca most likely never set foot on this particular shuttle. Perhaps this is all to establish Jan as an unreliable narrator, but even if that’s the case, it all just clutters up the page and doesn’t let the artists working on this issue do their half of the job of showing us the story.

Of course, the art of the story isn’t particularly alluring in this issue, so perhaps the narration is a necessary evil. Again, nothing is particularly breathtaking, and some panels are downright confusing, like this one: 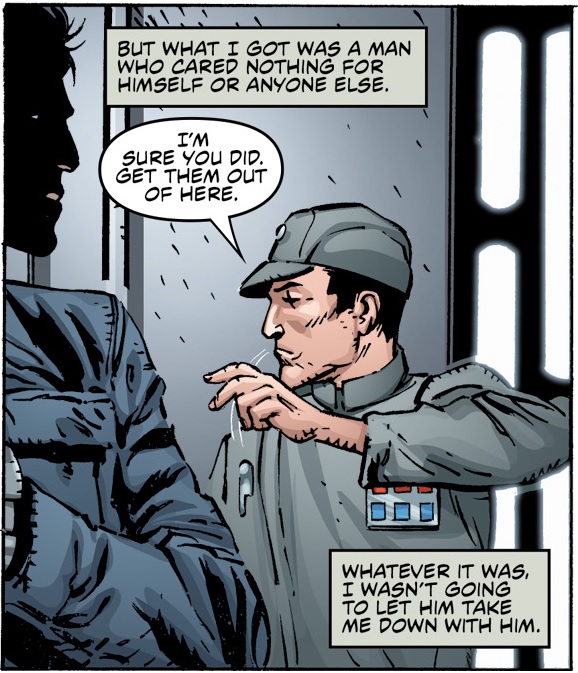 Why is Han’s face in shadow while the rest of his body is not? Is he somehow jutting out his torso into the light? My guess is Marco Castiello on the pencils and Gabe Eltaeb on inks want to show the dark side of Han’s character as is being narrated (again!) by Jan, but the panel just doesn’t make sense. Similar problems abound with it being impossible to tell Jan’s age from one panel to the next or if that’s hair falling out of his helmet or some weird tentacle. I don’t know.

Patrick, help me out here. Am I being too harsh? Is there something redeeming you can find here? Could it be that my protective tendencies regarding the original trilogy are clouding my judgment? Use a mind trick on me and tell me this is the comic book I’m looking for!

Patrick: Yeah, I think I can help you out a little bit. I totally agree with you that Jan’s narration steamrolls this whole thing, and we’re not left with a lot of opportunity to interpret the action on the page for ourselves. That’s frustrating, for sure, but I think it’s supposed to echo the Star Wars‘ fan experience. Hear me out on this one, because it’s sorta good: Jan knows who Han Solo is — how could he not? The dude’s a fucking legend. But because of his legendary status, Jan makes a ton of assumptions that turn out to be totally false. He thinks he’s going to die in that Catina-esque bar; he thinks this shitty ship is the Millennium Falcon; and his opinion on what Han’s values are are constantly changing. The only thing he knows for sure is that Han Solo is this mythical space warrior, who carries the Rebellion on his shoulders.

That is exactly the situation we Star Wars fans find ourselves in now. Taylor, I love the note about Hamill, Fisher and Ford being cast in the new film. Whatever the movie will have to offer, it’s got those three actors and the words Star Wars emblazoned across the poster. That’s the legendary mercenary we’re forced to encounter. Just like Jan, we jump to a ton of conclusions, making contradictory points about figures so iconic we can never properly understand them. Which, of course, means that Jan is a Star Wars fan analogue — so it’s no wonder you find him annoying.

Matt Kindt also might be playing too loose with the references-for-the-sake-of-references. I might end up registering this complaint with every licensed series we ever read, but there is such a delicate balance between gratifying fan-service and grating fan-service. I got a nice chuckle out of Jan’s “I have a good feeling about this” — an inversion of Star Wars’ repeated “I have a bad feeling about this” motif. But the line-for-line rip-offs of dialogue from this films wore out pretty quickly. They refer to Han’s borrowed ship as a “hunk of junk” like three separate occasions. Then Jan asks about the Kessel run, and Han gives Jan the same speech about learning to pick your fights that Obi-Wan gave in Episode IV. It doesn’t make me feel like we’re in some exclusive club that gets these references, and I hate that I can sense that intent behind them. Instead of rallying me to Kindt’s side, it’s sort of repelling me against him.

And that feels like the biggest shame of all. Clearly, Kindt is driving at a more abstract idea here. The story is about Han Solo, through the eyes of someone who’s in awe of — but doesn’t totally understand — him. So it makes sense that some of the action beats don’t make the most sense. (I’m with Jan in not understanding why Han just sat there and waited for the Storm Troopers to confront them before taking off in the ship.) There are hints that Han is working a long con, probably intentionally getting trapped  — notice the way how he indirectly mobilizes some other Storm Troopers. 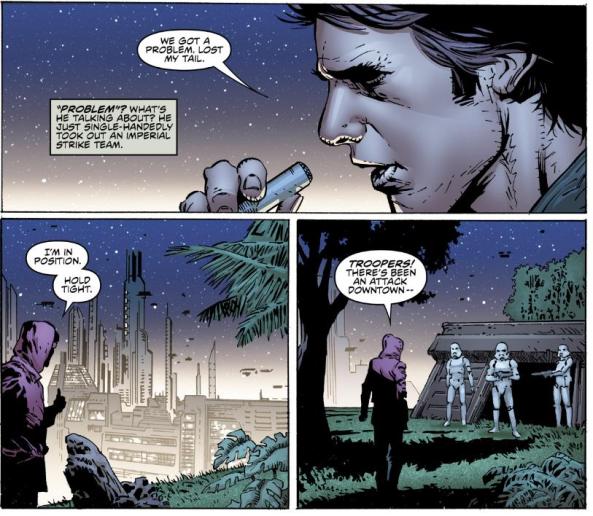 What we’ve got is a thematically rich story couched inside a larger heist-mystery. That should be all we ever ask for in life! Ultimately, Jan’s ubiquitous voiceover spend too much time persistently speculating to enjoy it. Maybe that’s the real take away — just as Jan can’t presume to know anything about Han Solo before he completes his adventure with him, so too can we not know anything about Episode VII until we’re done having our adventure with it.

I think that’s actually pretty typical of Kindt’s writing. Mind MGMT is often rich, but narratively impenetrable, and its cleverness gets in the way of the storytelling until it’s not even clear what the story is. Unlike my favorite issues of Mind MGMT, this is a frustratingly incomplete story, so I’m going to hold out hope that when the other shoe drops that it’ll be one hell of a shoe. There I go: speculating! I’ll learn my lesson someday.