Patrick: Shortly after I moved to Chicago, I was looking for jobs and had landed an interview for a secretarial job at an accounting firm. Or… maybe it was an accounting firm, maybe it was a bank? Something with money and finances, that much I knew for sure. I practiced answering questions about myself, I wore my best suit, and walked into the interview wholly unprepared to ask for a job at an institution I knew next-to-nothing about. I had underestimated just how hard it was going to be to get this job, and my confidence proved to be my undoing, as I was heading back to my car 15 minutes later. That’s the danger of moving to a new city and looking for a new job: you simply don’t know what you don’t know, and all of your previous assumptions get thrown out the window. Daredevil 3 finds Matt Murdock overestimating his likelihood of success over and over again. How do you think that works out for him?

Mark Waid and Chris Samnee give us some tools right up top to let us answer that question. In one of the more forested areas of The Presidio, The Owl meets with one of his informants / henchmen. Right from the start, even poor Eli is confounded by the Owl moves about the clearing, seemingly disappearing and reappearing elsewhere between sentences. In fact, Samnee substitutes and actual owl in place of the villain, adding another layer to his mystery. The mouse that crawls onto the page makes what’s about to happen to Eli all the more transparent, and the inevitable flurry of “who”s concludes with the mouse in the jaws of the owl, and the fate of Eli… up to our sinister imaginations.

This is in stark contrast to the way Matt was describing The Owl last month. He’s not a chump at all, but a brutal, evasive motherfucker with something to prove.

With that established, the perspective shifts back over to Daredevil and  The Shade. Matt’s momentarily off his game — blaming his poor judgment on overconfidence or sensory overload — but quickly sorts everything out and gets his enemy in a choker hold. They hatch a plan together to get at The Owl, which involves Matt going in his civvies and pretending to serve Owlsley with a subpoena, allowing Coleridge to get the drop on him. It’s a nice bit of deception, until The Owl reveals that he knows the where-abouts of Julia. What’s the matter? Don’t know who Julia is? Don’t feel bad — neither does Daredevil. But that’s just the point: Matt thought he could march in with a pretty good plan and manipulate someone he doesn’t know particularly well to do his dirty work for him. The Owl’s gambit pays off just long enough to open a fiery pit beneath Daredevil’s feet.

It’s hard to say which party Matt is underestimating here, but the simple fact of the matter is that he’s not taking anyone else’s agency into account when formulating his plans. The same is true when it comes to Foggy Nelson, who — despite his faked death — ventures out of his safe house to check on Matt. The character isn’t usually one for plans, necessarily, but the lawyer training tends to make Daredevil adept at improvising defenses. But this issue is all about challenging Matt’s default assumptions, and when every piece of information is new, he can’t take anything for granted. I love how much the beginning of this series seems to retroactively make “knowledge of New York City” one of Daredevil’s superpowers.

All of that confusion leads to Matt Murdock positioning himself over a trapdoor leading to fiery pit of doom. Wouldn’t Matt hear the sound of his footsteps change as he walked over the door? Wouldn’t he smell the smells and feel the heat coming off the fire? He’s too in his head, and all of the mental math he used to do automatically takes a back seat to the more immediate concerns of “where am I?” and “what am I doing?” The Owl’s goons are absolutely right to take his cane away, but I think Matt reveals a little more of his weakness than he intends to when he protests: 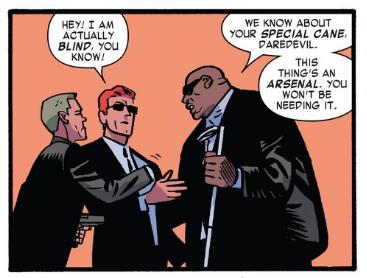 It’s not every day that superheroes have new weaknesses exposed, but it’s even rarer that that weakness has really been there the whole time. That’s exactly what we have here, and we can credit Waid’s keen observations about who and what Daredevil is for this development.

Scott, did you have as much fun with this issue as I did? Also, please, share an embarrassing story about being under prepared for something you were just too confident about.

Scott: Oh boy. OK, this one goes back a ways. I’m nine years old and at a birthday party, about to play my first ever round of laser tag. I’m one of the younger kids at the party, but I’d also been one of the younger kids on my little league baseball team and I held my own there, so why should this be any different? It’s time to choose our Laser Quest code names, so I anoint myself “Laser King”, a moniker that will surely seem appropriate when it sits atop the leaderboard once all is said and done, I convince myself. Little do I know I’m about to suck ass harder than anyone could’ve even thought possible. I spend the entire round getting bombarded by perfectly placed ricochet blasts, hit-and-run sneak attacks, and impossibly well-coordinated ambushes. These aren’t the kids I know, these are skilled warriors, bloodthirsty killing machines. I’m in over my head. I realize I’ve taken more than my share of lasers to the chest but hey, it’s not like I need to tell that story to my friends. I can lie. Then I remember: the scoreboard! Shit. Everyone gathers around the screen. Most scores are in the hundreds, with the top players nearing 1,000. I scroll down, down, down, until finally, at the very bottom of the list I see Laser King: -40. NEGATIVE FORTY! The only negative score. I did worse than if I hadn’t played at all. How or why that’s possible I still don’t understand. “Second place, sweet!” my friend calls out, before turning to me. “Hey Scott, what’s your code name?” “I don’t remember,” I say, dashing to the bathroom, eyes welling with tears.

Like a game of laser tag for literally anyone other than me, this issue is pure fun. The opening scene with the Owl is just plain awesome and builds upon the notion that Matt is greatly underestimating his old foe. Still, Matt is so calm and collected walking into the Owl’s fortress I was convinced he was going to succeed. His mistake isn’t that he’s cocky, it’s that his cockiness doesn’t fade until it’s too late. He still thinks he can talk sense into Coleridge despite his obvious emotional instability. 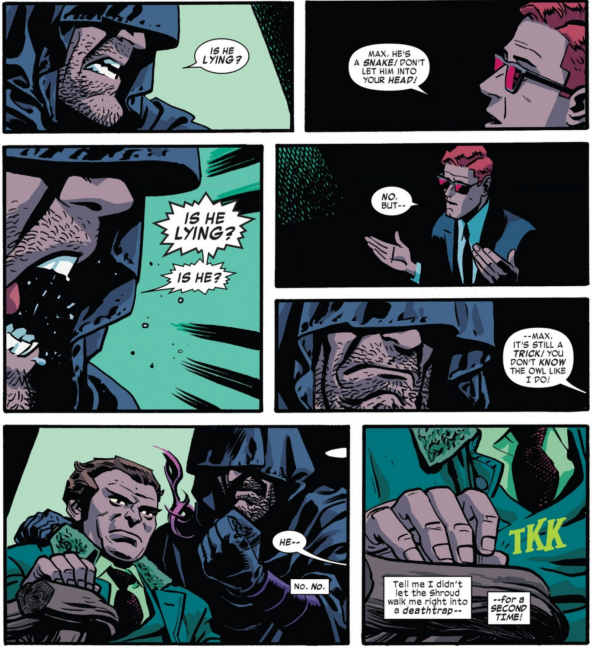 I can’t see why Matt doesn’t lie here. If he honestly thinks it’s a trap, what difference does it make? Matt is so confident he can’t lose, he doesn’t even consider the fact that he’s counting on a loose cannon in Coleridge. The Owl knows Coleridge’s type better. It’s easy to blame Matt’s failing on sensory overload or unfamiliarity with his surroundings, but he was legitimately outsmarted. If anything, Matt let his guard down. He thought he could play down to the level of his opponent, but didn’t realize the Owl had raised the bar. How could he be so blind!